Porting machine Ryan 'Icculus' Gordon shared a screenshot on twitter of the work he has put into the open source release of Serious Engine 1 working on Linux & Mac.

After resolving some code conflicts, it's also now working on Linux:

Okay, NOW we're up on Linux again (thanks to @salamanderrake for most of the heavy lifting, though!) pic.twitter.com/5iRRGQ0ZH4 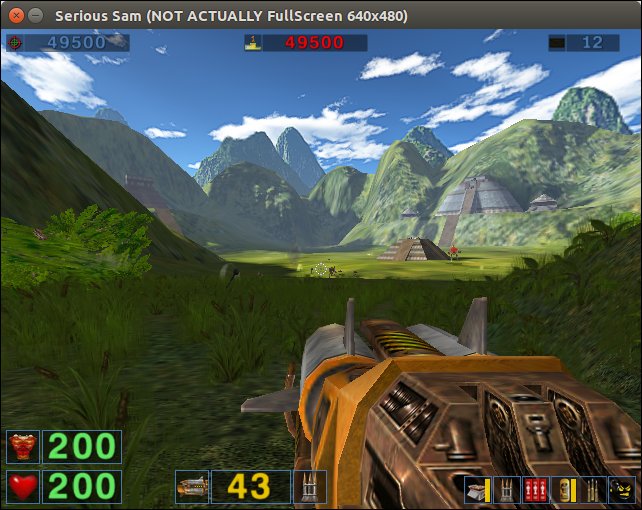 Be fun to see it all properly merged and released, so we can enjoy some classic Serious Sam on an open source engine.

You can also see a bit of Linux porting history, as Ryan put up the original changelog when he first ported it to Linux. Find more on that here.

You can find the official github here.

Article taken from GamingOnLinux.com.
Tags: FPS, Open Source
0 Likes
We do often include affiliate links to earn us some pennies. We are currently affiliated with GOG and Humble Store. See more here.
About the author - Liam Dawe

View PC info
There was a interview (sort of) with Ryan Gordon on LinuxGameCast Weekly Wednesdays.

View PC info
And here is Gordon's fork of the project: https://github.com/rcgordon/Serious-Engine, inside Sources is a script for building on Linux, haven't tested yet
1 Likes, Who?

Thank you very much Ryan!
0 Likes

I'd watched that vid during the weekend, As ven stated he was the sole game industry for us nixiers at one point :O

Yes, and I have removed the video from RT on it. I will not allow their stuff on here.
4 Likes, Who?

Yes, and I have removed the video from RT on it. I will not allow their stuff on here.

Sorry, I didn't know that
0 Likes

View PC info
Just as long as the bugs from the original beta ports do not re-manifest themselves here. ;)

I wonder how long this will take to reach the AUR.

Quoting: pete910I'd watched that vid during the weekend, As ven stated he was the sole game industry for us nixiers at one point :O

There were many games published between 2002 and 2010 mostly by LGP and Runesoft. Additionally, I can point out many indie game companies who published games for Linux e.g. Basilisk Games, Illwinter Game Design etc., and many big companies published their games e.g. id software, Bioware etc. Unfortunately, many indie companies who were active between 2002 and 2010 are closed now like Jugilus or they stopped to port/sell games to Linux e.g. KarjaSoft.

I think that Ryan was the only person who was the Linux game porter involved in so many projects, and many of them were very popular like ut2004, Second life.

Quoting: HamishJust as long as the bugs from the original beta ports do not re-manifest themselves here. ;)

I wonder how long this will take to reach the AUR.

Some issues were already fixed, mostly with menu, tooltips, compute and sound (which was a major pain for me in the betas which were available). Even some network code was fixed (as the error when levels finished).

The difference is: everything we stumble across now, we can fix :-).

Quoting: RTherenThere was a interview (sort of) with Ryan Gordon on LinuxGameCast Weekly Wednesdays.