Sid Meier's Civilization VI: Gathering Storm is out with Linux support as expected

Sid Meier's Civilization VI: Gathering Storm, the massive new expansion has arrived and as expected Aspyr Media managed to get in support for Linux right away. Note: Key provided by Aspyr Media.

This is the second major expansion for the game, following on from Rise and Fall which launched on Linux back in March last year. You can see some thoughts on that one from BTRE here.

Gathering Storm is huge, with many new systems that can completely change your decision making and how you plan for the future of not just your civilization but the world itself. These new features include natural disasters like floods, vicious storms and volcanoes along with nine new leaders and eight new civilizations. Additionally, you can construct seven new world wonders as well as new units, buildings and so on. 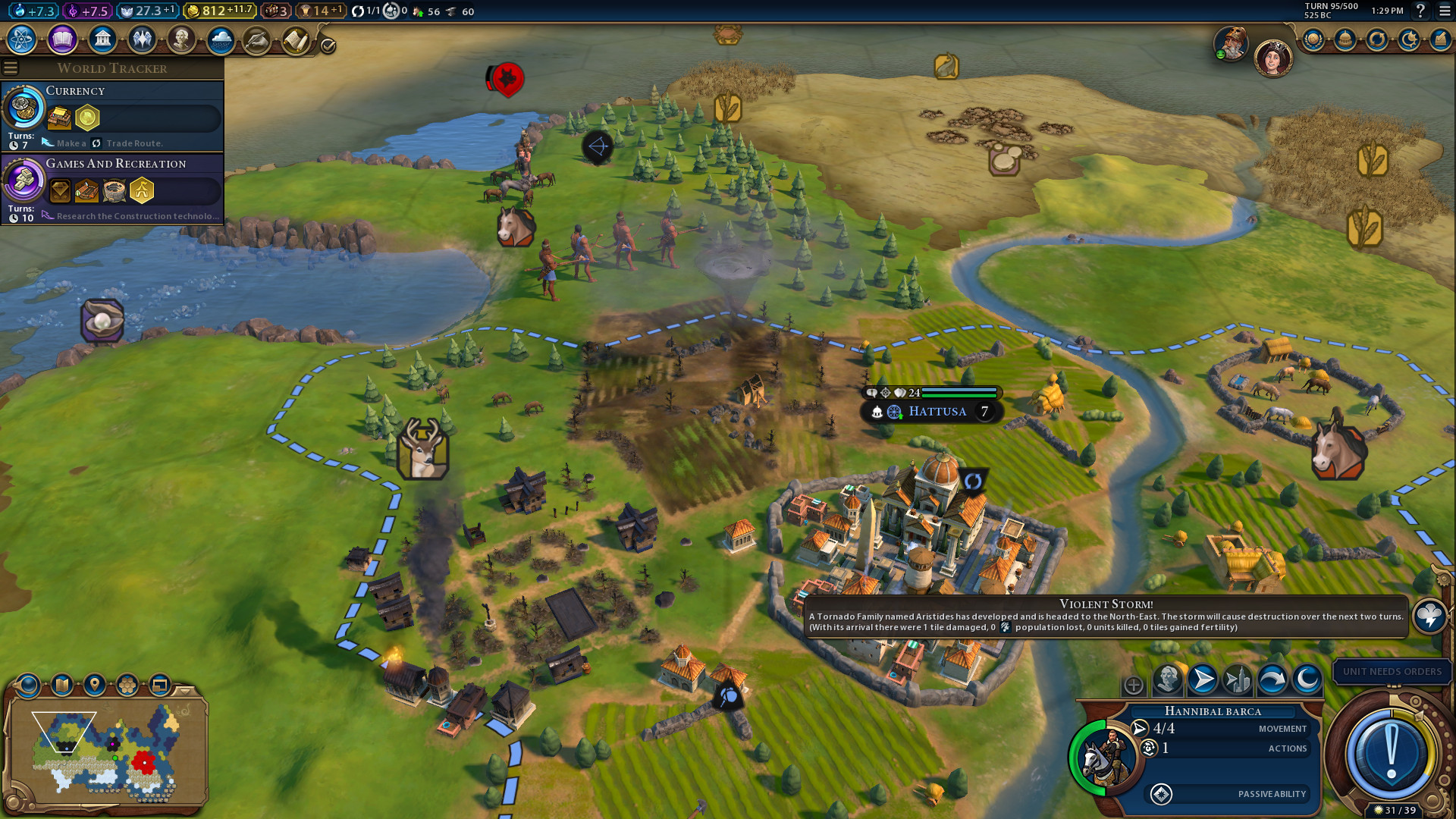 I have to admit, seeing my first tornado was a little unnerving as it began to move across the map, each turn it inched closer to my capital leaving a trail of destruction. Thankfully, it fizzled out within about four turns and so my first peek into the disasters was an exciting close shave. 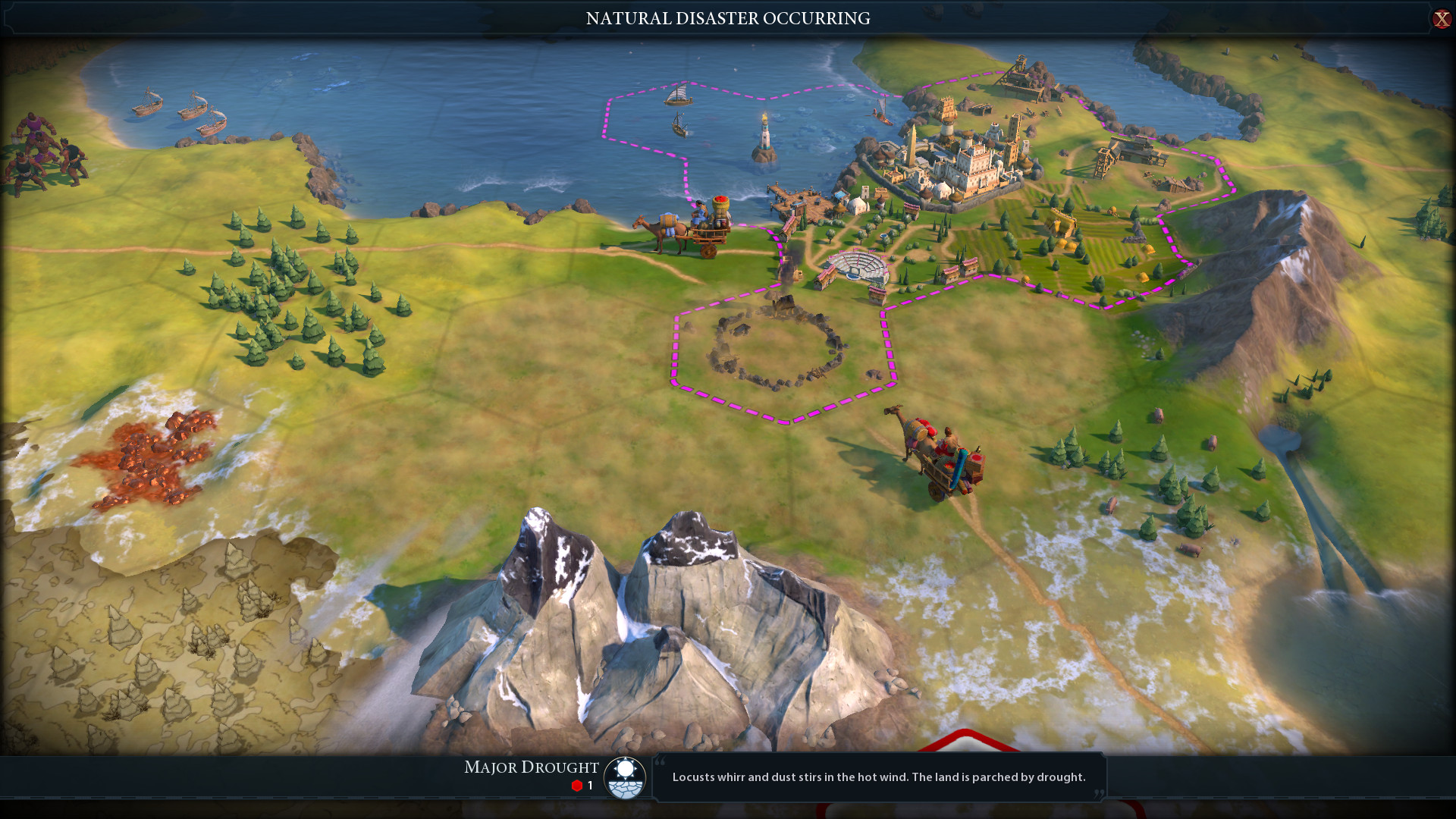 Thanks to all of these and many more, the game world feels vastly more dynamic and engaging. The excitement doesn't last long though, when some of these disasters actually hit your own cities but the challenge of dealing with them and preparing for them does add a new fun challenge to the game that I've felt for a while it's needed.

My first volcano eruption for example, it damaged two tiles while making another more fertile. So there are upsides as well as downsides to them. In hindsight, it probably wasn't the best idea to settle next to a volcano. 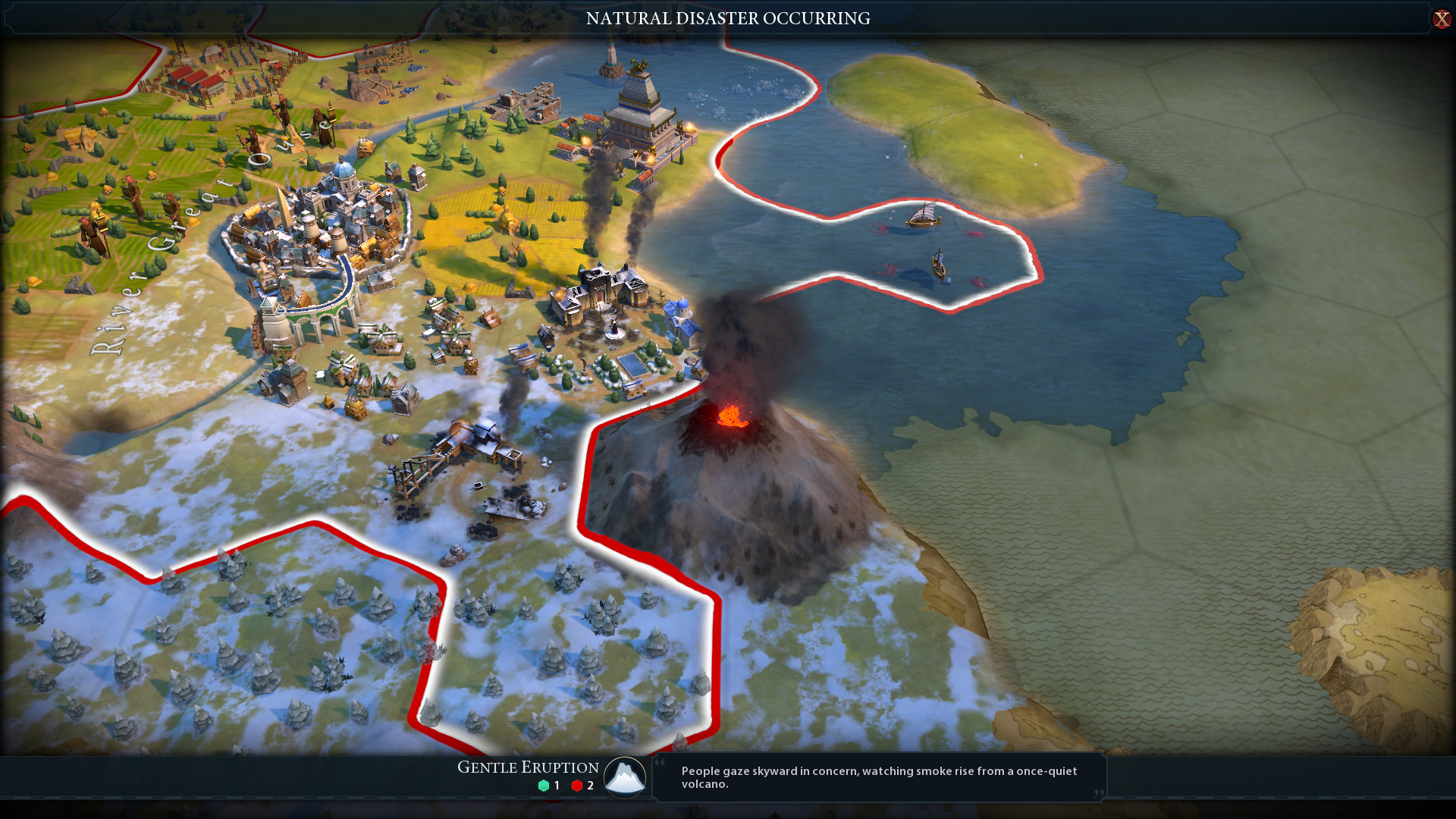 You can see an overview of all the new features in the official video below: 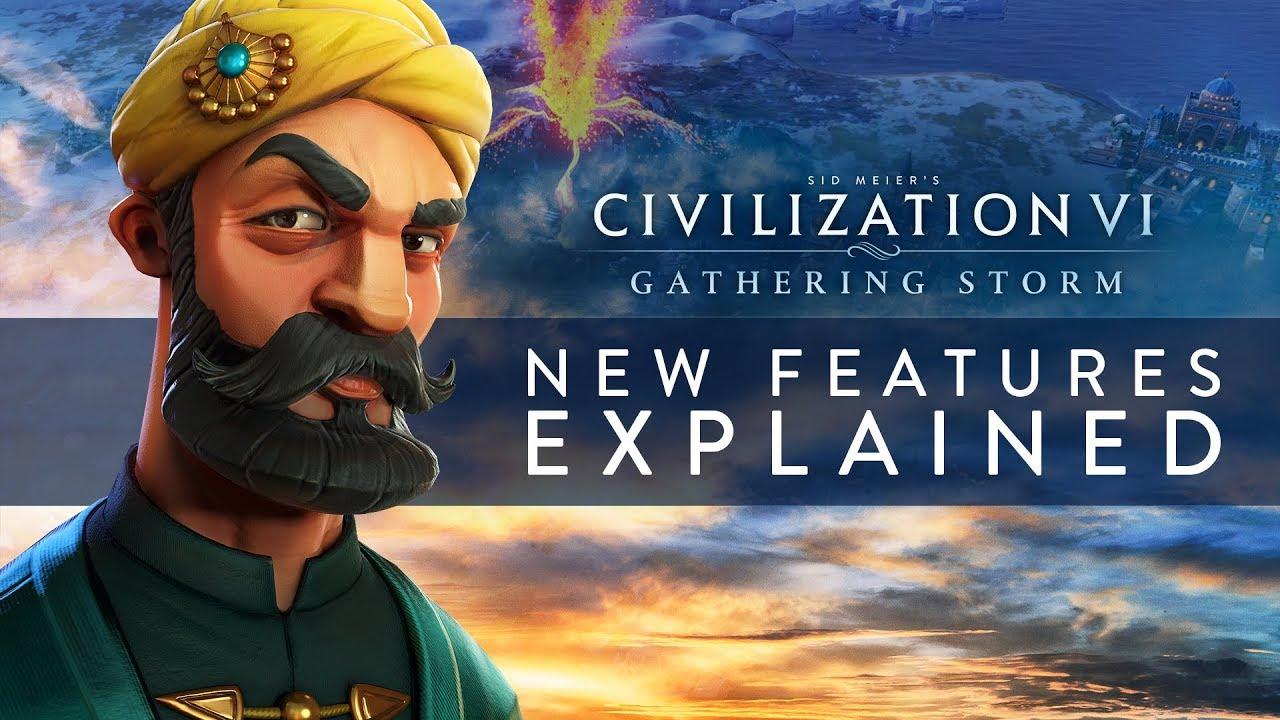 Linking in with the disasters, a lot of what you do now has a knock-on effect on the planet itself. Sea levels will rise, CO2 can increase and so on. This is huge for the game, since even very early decisions you make on what you research and build can cause dramatic changes to the environment in the later game.

There's seven different stages of climate change, each bringing in an additional rise to the sea level along with causing more serious levels of disasters and it really does make you think. Given what's happening to the world right now, it's quite fitting and on point.

There's other big new stuff that has been crammed in too, like the Diplomatic Victory option which you can achieve with the new World Congress system. With this, you can earn Diplomatic Favour, a new currency, which is used in the World Congress to help your own civilization or annoy others. 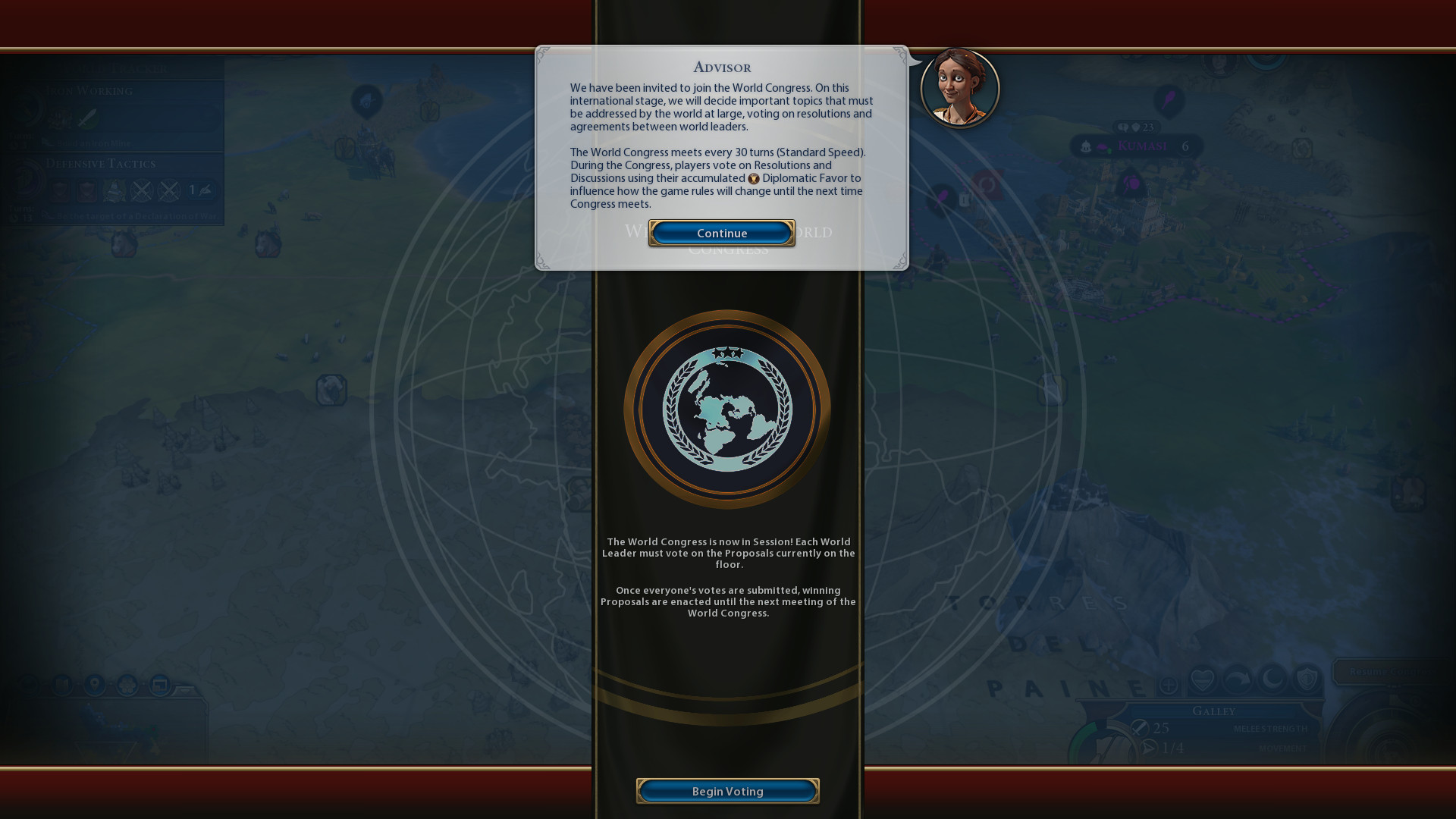 Around every 30 turns, you and other civilizations will vote on various resolutions that can have some very interesting effects. It's not quite as interesting as the disasters system though or climate change, especially given the options to pick are completely random. However, it does have its uses since Diplomatic Favour is a standard tradable resource, so if you have an excess of something you don't need trading for more Diplomatic Favour can make your civilization quite powerful on the world stage. 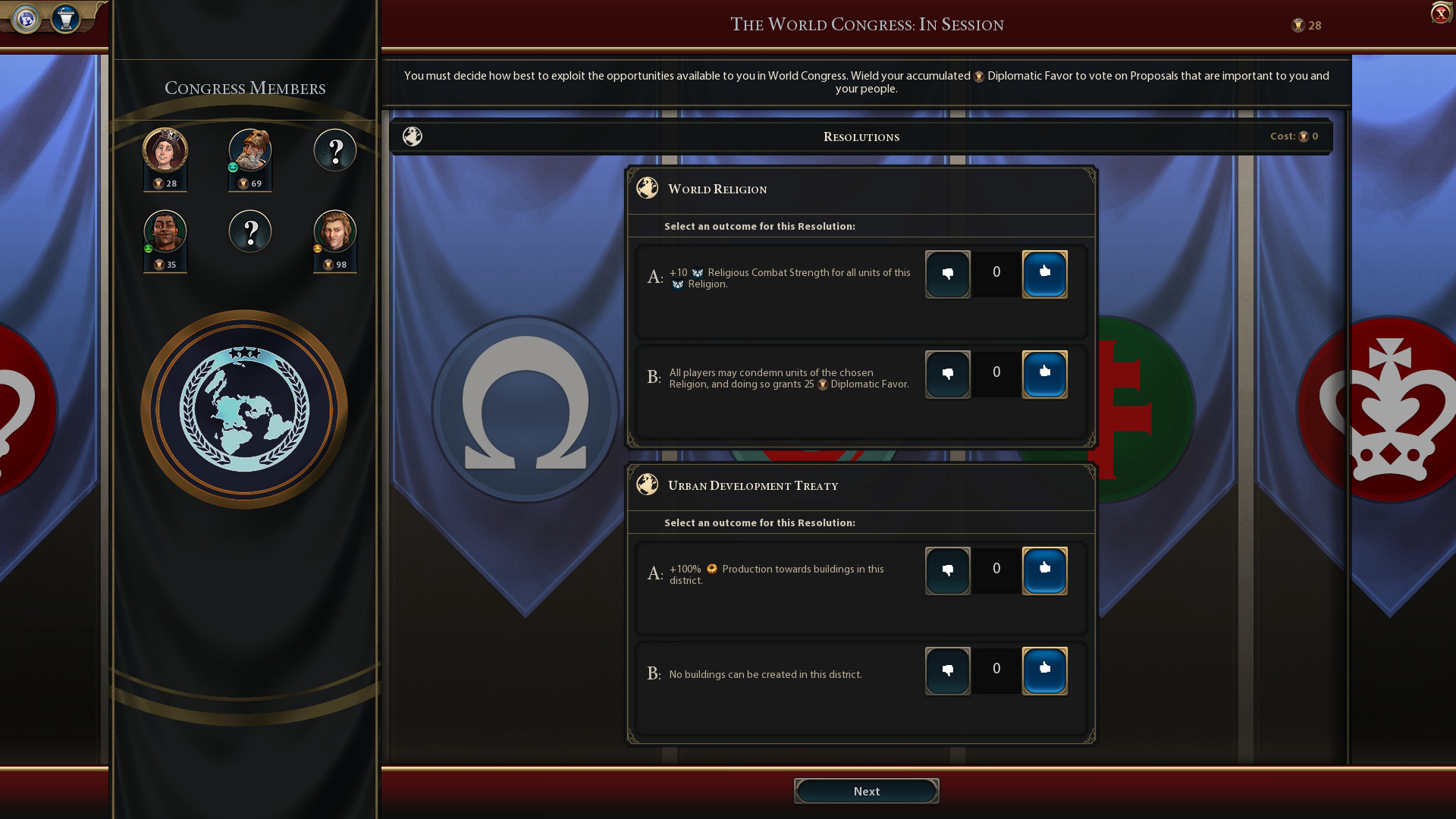 There's also two new exciting scenarios to play through. There's "The Black Death", which has you attempt to survive through a plague which comes in waves, as well as "War Machine" which is a 1v1 multiplayer only scenario as players take on either France of Germany during WWI.

Additionally, they're making use of a Steam feature not many games touch with the new "Play By Cloud" option. If you do a multiplayer game with this, the saved game is stored on their servers and you load it up whenever Steam gives you a notification telling you that it's now your turn, something I've only ever seen used in one or two other games before on Steam. Pretty cool feature, for those who love to play with others but often have conflicting schedules.

So much has been put into this expansion, I've had a hard time really getting to grips with it all. It's expanded it in many exciting ways that it would feel silly to pass it up if you enjoy the game already. Frankly, it's made me much more interested in it and I'm far more likely to include it in my regular list of games to play in my own free time now.

I did enjoy the game previous to this expansion but now it thoroughly scratches the "just one more turn" itch. When first loading it up with Gathering Storm, over half a day vanished in what seemed like the blink of an eye.

It's not all amazing though. The AI is still a quite rough in places, like how they constantly pestering you about idiotic things. They will repeatedly pester you to trade things that don't really make sense, get angry at you when you've not really done anything wrong and so on. It's not completely terrible but I do prefer playing it against real people.

Having it be in-sync with the Windows version releasing at the same time, with actual cross-platform multiplayer too, Aspyr Media are showing how ports can be done. It took them a while, sure, but the effort is worthwhile. However, they really do need to do something about the performance, once you get into the mid to late game it drops off heavily and it has been that way since the original release for Linux back in early 2017 with no noticeable improvements made.

You can pick up the DLC on Humble Store and Steam.

We do often include affiliate links to earn us some pennies. We are currently affiliated with GOG and Humble Store. See more here.
About the author - Liam Dawe
I am the owner of GamingOnLinux. After discovering Linux back in the days of Mandrake in 2003, I constantly came back to check on the progress of Linux until Ubuntu appeared on the scene and it helped me to really love it. You can reach me easily by emailing GamingOnLinux directly.
See more from me
Some you may have missed, popular articles from the last month:
The comments on this article are closed.
10 comments
Kithop 14 Feb, 2019

View PC info
As much as I'd love to jump on this, the EULA shenanigans are gross:

Quote"By installing and using the Software, you consent to the information collection and usage terms set forth in this section and Licensor's Privacy Policy, including (where applicable) (i) the transfer of any personal information and other information to Licensor, its affiliates, vendors, and business partners, and to certain other third parties, such as governmental authorities, in the U.S. and other countries located outside Europe or your home country, including countries that may have lower standards of privacy protection; (ii) the public display of your data, such as identification of your user-created content or displaying your scores, ranking, achievements, and other gameplay data on websites and other platforms; (iii) the sharing of your gameplay data with hardware manufacturers, platform hosts, and Licensor's marketing partners; and (iv) other uses and disclosures of your personal information or other information as specified in the above-referenced Privacy Policy, as amended from time to time. If you do not want your information used or shared in this manner, then you should not use the Software."

"The information we collect may include personal information such as your first and/or last name, e-mail address, phone number, photo, mailing address, geolocation, or payment information. In addition, we may collect your age, gender, date of birth, zip code, hardware configuration, console ID, software products played, survey data, purchases, IP address and the systems you have played on. We may combine the information with your personal information and across other computers or devices that you may use."

Quoting: KithopAs much as I'd love to jump on this, the EULA shenanigans are gross

I looked into it out of curiosity and it lead me to this and I have to agree with the assessment that people are getting it wrong and overreacting. I don't believe the bits you quoted apply for actual gameplay. See the "where applicable bit and compare to this (which is linked in Steam's EULA that you quoted as Take-Two's privacy policy). The clauses you quoted would seem to me to apply only if you created a take two account or otherwise gave them personal information elsewhere.
0 Likes

Breeze 14 Feb, 2019
View PC info
Is the AI still garbage? Does the AI at-least use planes and boats somewhat reasonably. Last time I played, the AI didn't even build planes or it built one and never used it.
0 Likes

Why not? Look how famous it made Pompeii...
5 Likes, Who?

Why not? Look how famous it made Pompeii...

Settling there was surely a long-term plan to help 20th Centiry tourism -- that, and the naughty pictures on the walls. *wink* *wink*
1 Likes, Who?

Does it work with radeonSI?
0 Likes
deckoff 15 Feb, 2019
And yet, years after the release Nvidia M cards are still not recognized by the game despite the claimed support.
Which effectively prevents the game from running on Linux
0 Likes

Quoting: deckoffAnd yet, years after the release Nvidia M cards are still not recognized by the game despite the claimed support.
Which effectively prevents the game from running on Linux

Did you email Aspyr support, if so what did they say?
0 Likes

Just a note: On Fedora I had to preload freetype to let the game, or better the launcher, start. Together with gamemode my launch command looks like:

May be this helps someone...
0 Likes
While you're here, please consider supporting GamingOnLinux on: