By BTRE - 6 August 2017 at 7:26 am UTC | Views: 10,447
You’ll be able to play the relaxing farming simulator with a friend before too long. The developer is planning to trial an official multiplayer mode before the end of the year, with a planned general release in 2018. 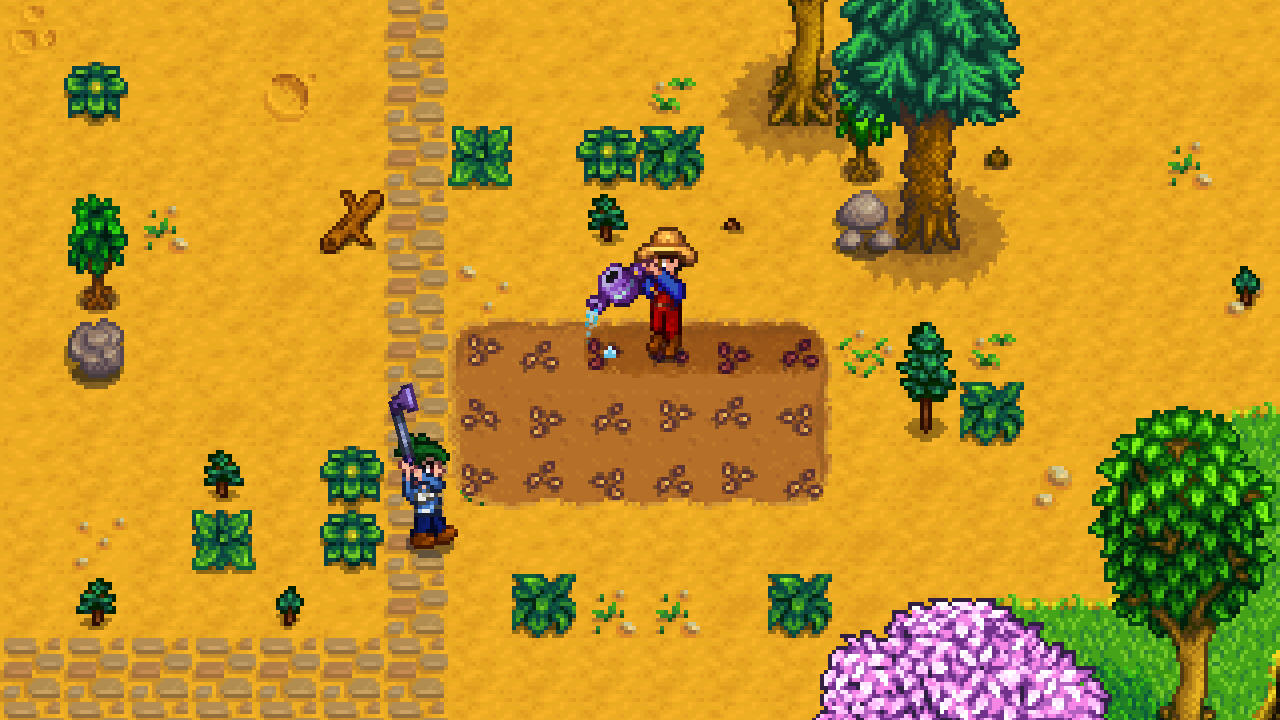 Stardew Valley [Official Site] is one of those games that’s as comforting as a warm cup of tea on a cold and rainy day. Leaving behind the stresses of modern life, players inherit their grandfather’s farm and return to nature. Heavily inspired by the Harvest Moon series, Stardew Valley is not just about farm work and forming bonds with both animals and people. Relationships with NPCs feel satisfying and are built up over time, potentially culminating in marriage.

The game has gotten several updates since its launch last year, adding more content and polish to an already engaging game. The multiplayer mode that’s going to be implemented will allow up to three players to play together at the same time. Players will even be able to get married to one another, though only the main player can decide certain things like when to sleep and when festivals begin and end.

Things like PvP and local multiplayer aren't planned for now, though and the beta will initially use Steam’s invitation mechanism only. It doesn’t say how the final version released across various consoles will work for matchmaking, but it does sound like something that they’re giving some thought as they're looking to roll out MP on all platforms. So those of you who have bought DRM-free copies may have to wait for the final patch 1.3 but you likely haven’t been forgotten.

Oh and the name doesn't mean anything but coincidentally could be pronounced as "Buttery" which suits me just fine.
See more from me
Some you may have missed, popular articles from the last month:
The comments on this article are closed.
15 comments
Page: 1/2»

View PC info
I remember playing Terraria with a friend.
I recall we spent 12 hours one Saturday night mining the high level ores so we could prepare for a boss battle.

Well , I know where my Saturday nights are going.
1 Likes, Who?


QuoteRelationships with NPCs feel satisfying and are built up over time

I have to disagree with that! The interactions and dialogues with NPCs are very limited. They get friendlier as you give them more and more gifts (which is a bit basic and mindless), but they mostly always repeat the same things and even dating someone doesn’t make them behave any different than before. It’s not all bad though, at least some dialogues are not childish.
0 Likes

View PC info
I am still not convinced that this game needs MP... still, it should appease the people who have demanded it since day one.

I'll give it a go with my girlfriend when it drops, and maybe I'll have a change of heart.
1 Likes, Who?

Quoting: WorMzyI am still not convinced that this game needs MP... still, it should appease the people who have demanded it since day one.

I'll give it a go with my girlfriend when it drops, and maybe I'll have a change of heart.

But for some demographics like couples it'll be a home run. I know so many couples who are excited to play SDV.
1 Likes, Who?

Trump 6 Aug, 2017
View PC info
Hopefully multi-player will work across platforms. Since I play on Linux and my wife player on windows. Excited to see what they have in store for next year.
0 Likes

View PC info
I can definitely see an audience for MP. I would surely be one of those people except not at this time. The people I'd play this with (my sister and my step-daughter) just don't play games anymore. When I was young, my sister and I would play games together like split-screen The Sims on PS2 and we'd take turns playing Harvest Moon and watch each other. But now we're adults... so I have to wait for my kids to get older to play with me. :P

I don't think my friends that do still play games would want to play this one with me... a little too chill maybe. For comparison, we have barely made any progress in Sword Coast Legends and that game at least has combat.

Again, I think the folk that will play Stardew Valley together will really love it. I'm sure I would. But I don't imagine I'll have the right companion for the time being.
1 Likes, Who?
Swiftpaw 6 Aug, 2017

View PC info
Soooooooooo eager for this patch to finally land! This game, especially with a few mods, is one of the best games ever. <3

Quoting: GuestNever actually played Stardew. Was a HUGE fan of Terraria, maybe I'll have to give it a go with some friends. Knowing me I'll end up getting 500 hours on it before I realise :D

I'm only familiar with Starbound but I know it's similar to Terraria, and both Stardew and Starbound have some things in common. You generally quest, gather resources, build, farm, mine, and sometimes fight monsters. But the focus and the way everything is rolled out and presented to you in Stardew Valley is smoother and more polished, doesn't overwhelm you as much, and is generally more likable in my opinion. I love aspects about both games but overall I have to say Stardew is the winner in my opinion hehe, but a lot of that is probably just preference.

Segata Sanshiro 6 Aug, 2017
View PC info
I don't get why there's such a huge demographic that demands multiplayer in games like this which are clearly supposed to be a single player experience, but then again, I'm an antisocial hermit who hates humans.
0 Likes
1/2»
While you're here, please consider supporting GamingOnLinux on: