Every month Valve put out their hardware survey, inside it shows off the market-share of operating systems and Linux has continued to decline.

For September 2017, Linux was at 0.60%. This is far from where Linux market-share on Steam was some time ago, although it has never been all that high anyway.

Here's a chart provided to me by EndeavourAccuracy (thanks!), which shows the unfortunate trend: 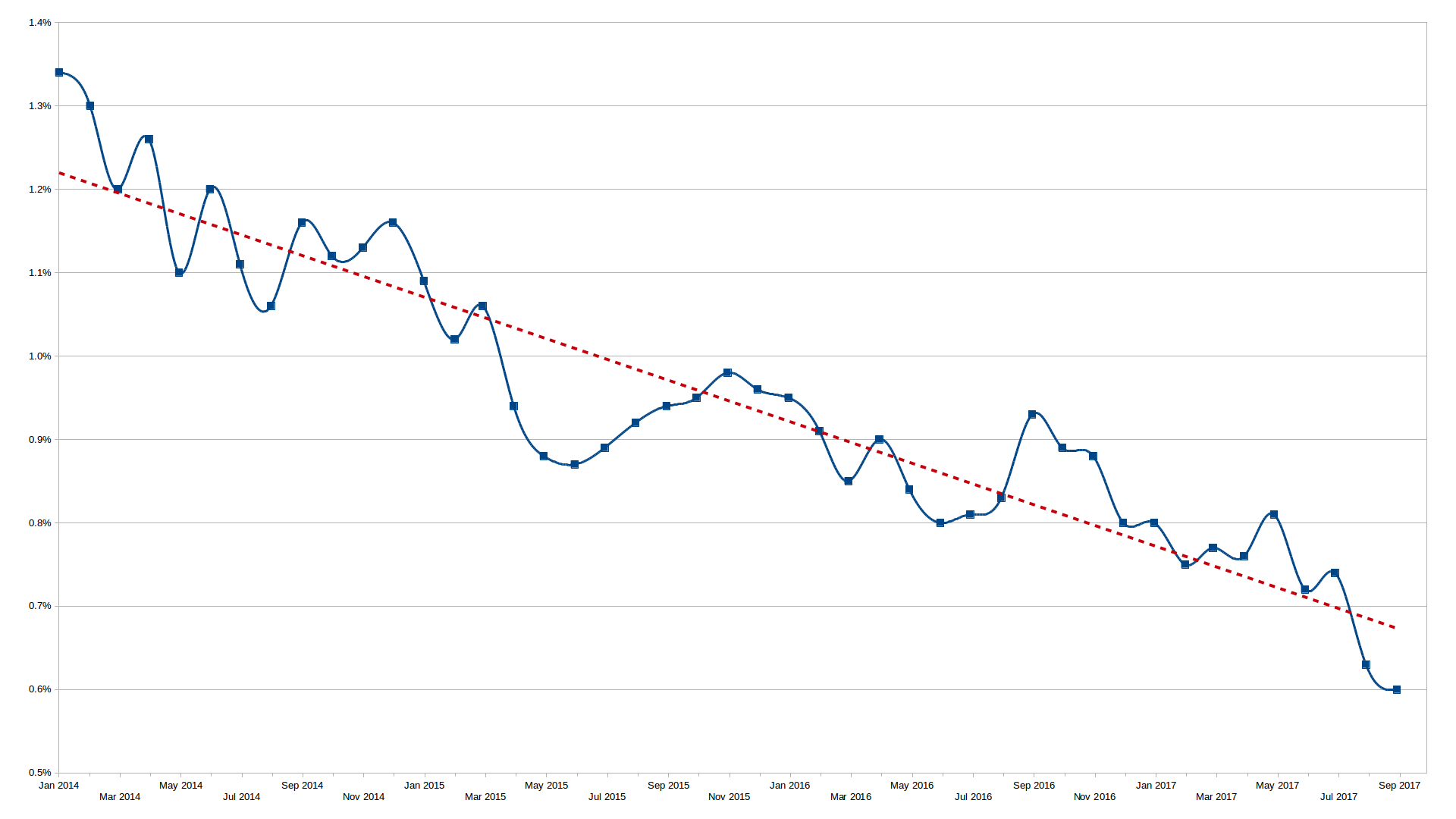 There could be many reasons for this, all of which I've probably mentioned before at some point. The one thing I would like to stress though, is that market-share declining doesn't necessarily mean less people. The amount of people using Linux for gaming on Steam, might actually be increasing, just not as quickly as Windows so it gets swallowed up. We know for a fact Steam is constantly growing and perhaps in markets where Linux isn't popular pushing the Linux share down. However, the opposite could obviously be true too.

We do need to take into account people who dual-boot, which isn't going to be a small number. Even our own limited survey shows about 31.78% of people also use Windows.

Obviously it's not good to see this trend, but as long as Linux games sell enough for a developer to be happy, that's the main point. Going by the last time I spoke to multiple developers about sales of their Linux games, most games mentioned in that article were selling well above the current percentage of Linux gamers as tracked by Steam.

I highly doubt Feral Interactive would also be announcing another Linux port, if the real amount of Linux gamers was declining either, since the types of titles they port would likely need a lot of sales to be worth it, yet they have two new titles currently being teased for Linux.

What are your thoughts on this?

I am the owner of GamingOnLinux. After discovering Linux back in the days of Mandrake in 2003, I constantly came back to check on the progress of Linux until Ubuntu appeared on the scene and it helped me to really love it. You can reach me easily by emailing GamingOnLinux directly.
See more from me
Some you may have missed, popular articles from the last month:
The comments on this article are closed.
92 comments
Page: 1/10»

BabaoWhisky 2 Oct, 2017
View PC info
If Feral, Paradox, Obsidian, inXile, Larian stop to port their games on Linux, i go back to Windows completely.
Actually, i use pci-passthrough to play for no-Linux games ...

I'm not decided but i think to move to Windows before that.
1 Likes, Who?

View PC info
Maybe if they counted WINE users as linux the numbers would be better. I'm sure they check the environment and can tell when their client is using WINE. These are people who obviously don't want to run windows, after all, as good as WINE is, it is more difficult to get things running properly with it than with native windows.

That being said, all the numbers are a blind crapshoot and really only represent trends. No one knows the actual numbers. Liam mentions some good points, and it doesn't even include people that avoid steam due to DRM or people that run distros that don't work well with steam.

Just make sure that if you dual boot to buy anything off of steam only on linux... otherwise it will count as a windows sale. I remember a long time ago Aspyr mentioning that they get paid based on linux buyers and that is how it was determined, so I am sure every developer gets a report with sales per OS. (I want to say that I saw that Aspyr note after the port of Civ V, so it has been a while.)
5 Likes, Who?

View PC info
Nice graph, that says more than the individual numbers. I do wonder about the section before it though. In any case, it appears Steam is growing quicker for Windows users than it is for Linux users at the moment. And PUBG isn't doing it any favours either.

As for Windows users on this site. Even I do that at work. No chance of me getting a survey on Windows though.
2 Likes, Who?

VinceNardelli 2 Oct, 2017
View PC info
This news hurt guys... But people want comfort over freedom and morals. I use Linux and wont use Windows not even in dual boot.

But imagine I am waiting for a game that I have been waiting for year, lets say the next Ken Levine game, after BioShock infinite.
Imagine it comes on win only. How difficult will it be for me not to use windows, even for that game?

The point is, more linux games will come and the customers will move towards it.
I still cant figure out how more linux games now lead to less linux users on steam. It just doesn't make sense.


Still, Valve has done a pretty crappy job with steam machine and the whole idea of linux more optimised than windows.
It s definitively not because of them that so many linux games are coming out.

I bet if Half Life 3 will ever come out it will be a Console only lol, give how much 'sense' they make right now
1 Likes, Who?
peterp771 2 Oct, 2017
I wonder how much Chinese users, many of whom use pirated Windows software, contribute to these numbers. It would be interesting to see a regional breakdown.
6 Likes, Who?

View PC info
We need something against PUBG, something like Fortnite.
1 Likes, Who?

QuoteEven our own limited survey shows about 31.78% of people also use Windows.

Anyway , main thing is we are so much dependent on Steam. We need at least one out of Steam but yet popular title.

Just thinking about LoL. Despite i found Dota2 much better ( ex Dota1 player ) , something like LoL is needed.

There are so many people only plays LoL and doing some web browsing.

We need them. If we want to grow , we need mediocre and mainstream gamers more than ever.
3 Likes, Who?

Quoting: peterp771I wonder how much Chinese users, many of whom use pirated Windows software, contribute to these numbers. It would be interesting to see a regional breakdown.

Afaik , Ms has a Chinese edition of Windows which is totally free.

Case is , Steam wasn't allowed before in China. People were using Windows again , they just started to count on these statics.
0 Likes

View PC info
As long as the AAA Companies dont release a Linux Version there is no chance for a Gamer to switch to Linux.
Gamers just follow newly AAA released games and the current gaming trend

PLAYERUNKNOWN'S BATTLEGROUNDS is the current gaming madness and no Linux version
and before a couple of days everyone wanted to play Total War: WARHAMMER II
On September was Pro Evolution 2018 and so on ...