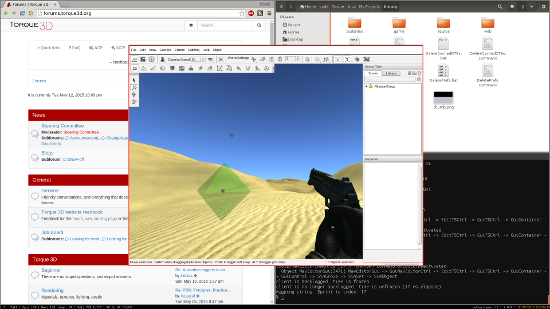 You can add Torque 3D into the list of game engines that support Linux, it's not 100% finished, but it's good to see them do it.

QuoteAs if you haven't heard this enough already, T3D now supports a Linux client with OpenGL rendering. This has been a herculean effort by some dedicated and talented programmers, so everyone give them a huge pat on the back! Particular thanks goes to Luis, who has spearheaded the effort, Lopuska, who has helped hugely, Azaezel, who has been diligent as usual, and BeamNG, who have supported Luis's efforts and the engine in general.

Note that not everything is working quite right in Linux just yet - there's still work to be done, especially around the platform layer, and some graphical bugs that no doubt lurk in different GFX/driver combinations. But this is a huge step towards full cross-platform support for the engine, and we're really happy to have Linux back.

We do often include affiliate links to earn us some pennies. We are currently affiliated with GOG and Humble Store. See more here.
About the author - Liam Dawe
I am the owner of GamingOnLinux. After discovering Linux back in the days of Mandrake in 2003, I constantly came back to check on the progress of Linux until Ubuntu appeared on the scene and it helped me to really love it. You can reach me easily by emailing GamingOnLinux directly.
See more from me
Some you may have missed, popular articles from the last month:
The comments on this article are closed.
9 comments
Sslaxx 2 Jul, 2015
View PC info
Way too little, way too late.
0 Likes

View PC info
Great news! Btw: The original "Torque Game Engine" has been a Linux game engine since the very beginning (~2002). 10 years later they split it into the Torque 3D and 2D Game Engine.
0 Likes

Like.... Ten years too fucking late. I supported the pricks way back when TGEA was the initial push for a modern renderer. Once they started focusing on only DX and Windows I pretty much fell out of that scene.

Still a nice engine, with some very cool innovations, but yeah. I'm using either GoDot, Unreal Engine, or any number of other well supported Linux based engines.
1 Likes, Who?

View PC info
Well to be fair, the current Torque3D MIT version has really almost nothing to do anymore with GarageGames (or what ever company owned them when things got bad). After they more or less dumped the source, a lot of long time users took it up and are now managing this community project. They even moved the community off the garagegames servers and are now on Torque3D.org.

Therefore all the hate is really misdirected, and the new Torque3D MIT project is shaping up rather nicely.
1 Likes, Who?

Well since it’s MIT I will have a look at it once the Linux version is ready. If it’s a better fit than Godot for some use cases, why not?
0 Likes

View PC info
Does this engine have anything going for it over its competition? It seems we have a luxury problem these days. So many engines supporting Linux these days! :)
0 Likes

View PC info
It's about the only open-source engine that comes with mature tools and several big commercial releases under it's belt (however many years ago). Especially in regards to it's networking engine for 30+ players in a twitch style game (FPS or Tribes like games), you will hardly find an engine (open-source or not) that has more proof that it can do that well.
1 Likes, Who?

View PC info
It's always good news when a new engine comes to Linux. The more choice, the greater the chance developers will support our platform.
1 Likes, Who?
While you're here, please consider supporting GamingOnLinux on: