It seems we're going to get more strategy game goodness, as Feral Interactive have confirmed Total War Saga: Thrones of Britannia [Steam, Feral Store] will release for Linux. This is fantastic, as the Total War games are popular with a lot of people, having more of them on Linux is ideal.

Curiously, this is not a game they previously teased. It's now showing up as a new game on their teaser radar, so we still have the "It's just a shot away" game to be properly announced. This makes three games announced/teased for Linux this year so far from Feral, not a bad start! 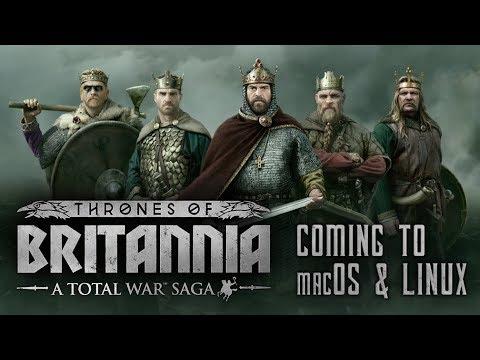 It releases for Windows on April 19th, with Feral Interactive saying the Linux version will release "shortly after Windows".

“The choices players make in THRONES OF BRITANNIA’s campaigns have far-reaching consequences,” said David Stephen, Managing Director of Feral Interactive. “As they make decisions in response to a sequence of seismic events, players will forge their own diverging paths through the turbulent years following King Alfred the Great’s initial victory over the Viking invasion.”

Feral aren't giving out many other details yet, with system requirements due closer to release.

It's said that this is the first in "series of standalone games inspired by great turning points of history" so it's likely there's more to come after this as well.

We do often include affiliate links to earn us some pennies. We are currently affiliated with GOG and Humble Store. See more here.
About the author - Liam Dawe
I am the owner of GamingOnLinux. After discovering Linux back in the days of Mandrake in 2003, I constantly came back to check on the progress of Linux until Ubuntu appeared on the scene and it helped me to really love it. You can reach me easily by emailing GamingOnLinux directly.
See more from me
Some you may have missed, popular articles from the last month:
The comments on this article are closed.
76 comments
Page: 1/8»

Eike 19 Feb, 2018
View PC info
Good news!
We were a bit short of Feral announcments lately, but it's surely getting better!
And I like the sound of "shortly after Windows release" (yes, I know which one would be even better ;) ).
5 Likes, Who?

View PC info
Total War games aren't really my thing. I bought one of them to support Feral, but it's obvious that I don't have the time and patience for it these days. But it didn't replace one of the unknown hints on the Feral radar, so there is still more to look forward to!
7 Likes, Who?
Zlopez 19 Feb, 2018

I'm still waiting for Total War: Warhammer 2.
The first one is excellent as a game and as a port made by Feral.

This is still the good news.
5 Likes, Who?

Not again!) I think it's enough strategy games for Linux already.. Sorry Feral, but i ain't buy this game.

Quoting: yar4eNot again!) I think it's enough strategy games for Linux already.. Sorry Feral, but i ain't buy this game.

I'm not into them either. I might have given this one a try - if I wouldn't be as much out of time as I am.
I'm happy Feral seems to do fine with these ports, though, as long as they emit a Tomb Raider or Life is Strange from time to time. ;)
3 Likes, Who?

SadL 19 Feb, 2018
View PC info
Huge fan of the series, so I'm on board! I was getting worried about the new total war titles..this announcement is reassuring! Pleasantly surprised also by the "shortly after Windows" quote!

PS: I am also waiting for warhammer 2..
1 Likes, Who?
RichieEB 19 Feb, 2018
Awesome, waiting for more news if you can play multiplayer with other platforms.
0 Likes

I have voted for somebody else last time to send them a warning.
So you all owe this one to me, I guess! ;)
2 Likes, Who?

View PC info
I'll purchase this just to support Feral, most likely won't be playing it though. Not enough patience blessed me for these neither.
2 Likes, Who?
1/8»
While you're here, please consider supporting GamingOnLinux on: