In the mood to try a new survival game? How about one that's free while it's in the alpha stages? Valheim [itch.io] seems pretty interesting.

What's also quite interesting, is that one of the people working on it actually does so on Linux, which is always sweet to find out.

Valheim is a game about exploring a huge fantasy world inspired by norse mythology and viking culture. You start your adventure at the relatively peaceful center of Valheim. The further from the center you travel, the more challenging the world becomes. But you will also find more valuable materials that you can use to craft deadlier weapons and sturdier armor. You will also build your own viking strongholds and outposts all over the world. Eventually you will build a mighty longship and sail the great oceans in search of exotic lands … but be wary of sailing too far... 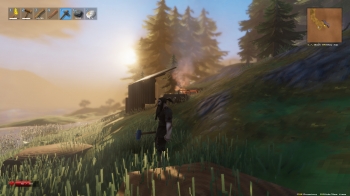 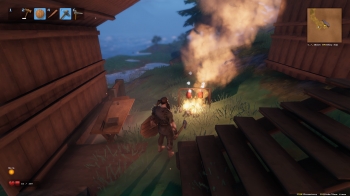 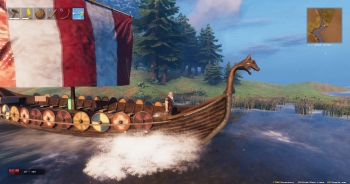 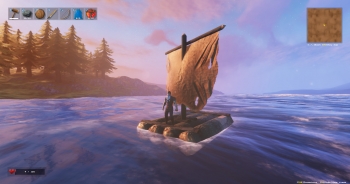 The more I play of it and learn the mechanics, the more the game has opened-up. Gathering new resources opens up new crafting options, the building system seems pretty nice with objects snapping together and falling down if they don't have enough support. I haven't seen too many enemies so far, but the ones I have seen are fun, especially those that run away when I get my torch out and set them on fire. Get off my land demon!

It's quite tempting to boot up a server for this one, as it has some interesting ideas and the gameplay from my own testing seems quite nice so far. Quite amusing that I nearly died while cutting down a tree, as it fell onto another tree, that tree then smacked into another and then they all came tumbling down on top of me—woops.

Find it free (for now) on itch.io.

Article taken from GamingOnLinux.com.
Tags: Alpha, Free Game, Itch.io, Open World, Survival
19 Likes, Who?
We do often include affiliate links to earn us some pennies. We are currently affiliated with GOG, Humble Store and Paradox Interactive. See more here.
About the author - Liam Dawe

View PC info
Looks impressive at the first glance. I'll give it a try.
0 Likes

View PC info
It's kind of like ARK except the developers actually know what they are doing.
2 Likes, Who?

View PC info
I might try it. I mean, it's free, right?

I am not sure how I feel about the graphics. It looks like retro pixel graphics with a higher pixel count than most "pixel" games these days. I guess I'll see once it's on my screen in motion.
0 Likes

View PC info
I was a little sceptical about the graphics, but I'd say they actually look downright good in motion.

The game runs quite well too, even if the loading times are really long, and the in-game information is quite lacking.

Most definitely going to spend some more time with this, mainly because at first touch it feels like an actually playable version of A.R.K.
0 Likes

I am not sure how I feel about the graphics. It looks like retro pixel graphics with a higher pixel count than most "pixel" games these days. I guess I'll see once it's on my screen in motion.

Not a fan myself of pixel graphics, but this game is looking really good.
0 Likes

View PC info
It does look nice, monsters too (the forest ones are quite interesting). I feel like the biggest issue is the building though, it's very tedious (aiming and placement of parts), also the building hammer tool interface itself is quite poor.
0 Likes
Voc007 7 Aug, 2018
No go on Mint 19 and nvidia drivers, it boots up, shows the Made by Unity then just black background. Windows version works great. All other games like SOTA and Albion start just fine.
0 Likes

Free on itch.io? Well, the price is right. And with a Linuxian at the forge, I'd be surprised if we didn't see a Linux build. Definitely one to watch.
0 Likes

View PC info
Gave it a try last night. A very short try because the key bindings couldn't be changed (yes, I did change them in the launcher) and I couldn't actually move properly.
0 Likes
1/2»