Valve are now offering a chance to test a beta of the next version of Proton in their Steam Play system.

As a reminder: Steam Play is the system built into the Linux version of the Steam client to allow you to play Windows games on Linux. Compatibility varies from game to game, you can see the current titles that Valve have whitelisted in their original announcement. 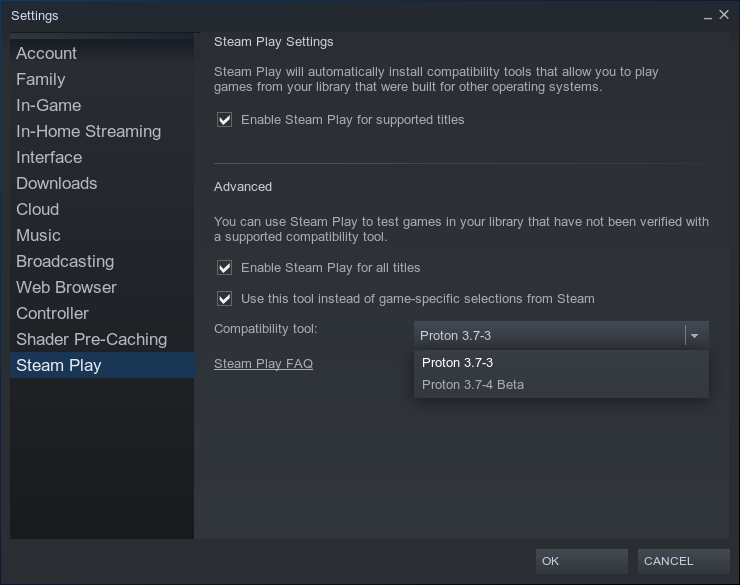 You can track the changelog here. As for what Proton 3.7-4 has: support for Python 3, DXVK updated to v0.70, better keyboard focus for those on GNOME Shell, controllers hopefully no longer causing long delays on startup and more. Seems like a pretty good update and it's going to be fun to watch it progress.

Actually getting it show up is a little finicky. It didn't seem to appear until after I started a Steam Play title and then restarting Steam, so hopefully they will improve that over time too.

Article taken from GamingOnLinux.com.
Tags: Steam Play, Beta, Steam, Valve
41 Likes, Who?
We do often include affiliate links to earn us some pennies. We are currently affiliated with GOG and Humble Store. See more here.
About the author - Liam Dawe

I am the owner of GamingOnLinux. After discovering Linux back in the days of Mandrake in 2003, I constantly came back to check on the progress of Linux until Ubuntu appeared on the scene and it helped me to really love it. You can reach me easily by emailing GamingOnLinux directly.
See more from me
Some you may have missed, popular articles from the last month:
The comments on this article are closed.
104 comments
Page: 1/11»

Oh yes. Microsoft will be so happy about this move!
9 Likes, Who?

View PC info
Sleeping Dogs works for me with the beta.
6 Likes, Who?

Oh yes. Microsoft will be so happy about this move!

I said it before: embrace, extend...

Valve are giving Microsoft a taste of their own medicine. How strong a dose remains to be seen, but I'm sure - whether GabeN and co. actually think of it in those terms or not - that's what's going on.
8 Likes, Who?

What do people think is the better choice to run Windows games now? regular WINE? Staging? Proton?
2 Likes, Who?