Review bombing is becoming more and more common, so Valve are looking into ways to sort out the mess that Steam user reviews are becoming. They've announced: histograms.

Steam user reviews have become a weapon. Review bombing is when users flock to a Steam page and make negative reviews, in hundreds and possibly thousands. It often happens when a big name Youtuber says bad words about it, so people in their droves go to the Steam page and make the review score dive.

The problem here with Valve's addition, is that people need to know what review bombing is. Let's face it, the vast majority of PC gamers likely have no idea what it is. I would go further, and say that the majority also see "Mostly Negative" and probably won't look at a game again. 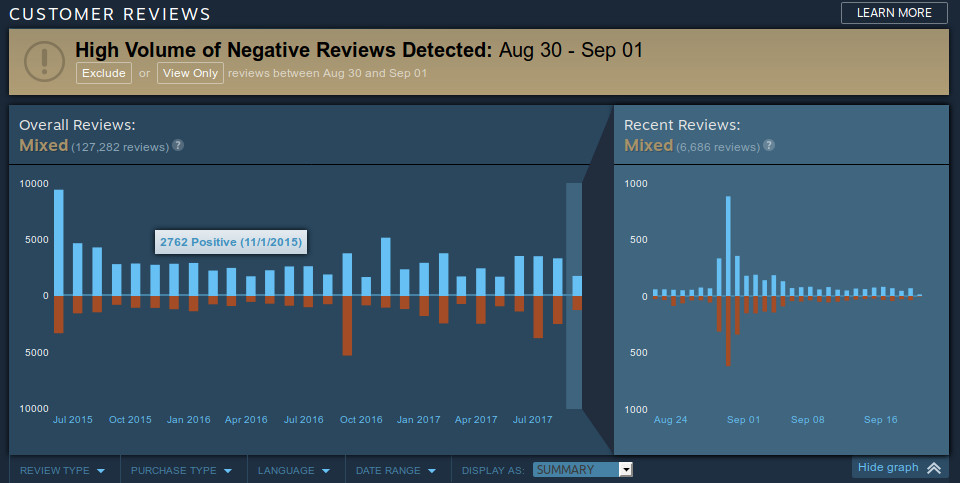 They show it by default, if there's been an issue. Otherwise, it requires a button click to open.

Another interesting point from the Valve post, is this:

Hopefully this post has been useful. It's quite possible that we'll need to revisit this when we move to personalized review scores, where our prediction of your happiness with a purchase is based upon the games you've enjoyed in the past. In the meantime, we'll keep a close eye on the community conversation around reviews.

It will be very interesting to see what Valve mean by a personalized score. They're much smarter people than me, but I don't really see how you can personalize a review score. One possible they may do, is give it their own overall score based on the type of game it is, the types of games you've review positively and things like that.

Naturally, a fair few developers aren't too happy about Valve's changes. I've seen a number of developers on Twitter make jokes about it, like this one:

I'll be honest, that made me chuckle a bit.

You can find the lengthy news post about it here. It's nice to know Valve are thinking about it at least, there's not a massive amount you can really do to combat such a thing. The thing is though, throwing more and more data at users isn't going to help, it's going to end up overwhelming people.

Valve did think about locking down reviews temporarily, like the stock market would do if something's up. The problem is, it would likely just carry on once they unlock it. So Valve, for now, has decided to do nothing about them.

The crazy thing is, I'm not personally sure if developers should be shielded from this tactic. I mean, if a game is being reviewed bombed, you can be 99% sure it's for a properly valid reason. If a developer is pulling some shady crap, I want to know about it and reviews are a damn good way to see that.

Take ARK: Survival Evolved again as a prime example. The game released, with many issues. The game has features on Linux that are completely broken and have been for some time. That's on top of the vast amount of issues on the Windows version. If Valve did make steps to stop people making reviews dive and it stayed at Very Positive, would you be happy after spending £49.99 to end up finding out negative reviews pointing out all the flaws had been stopped? I don't think so.

However, there's obviously times when a game is review bombed for idiotic reasons too. It's not a one size fits all approach and I'm not saying it is.

Article taken from GamingOnLinux.com.
Tags: Editorial, Steam
13 Likes, Who?
We do often include affiliate links to earn us some pennies. We are currently affiliated with GOG and Humble Store. See more here.
About the author - Liam Dawe

I am the owner of GamingOnLinux. After discovering Linux back in the days of Mandrake in 2003, I constantly came back to check on the progress of Linux until Ubuntu appeared on the scene and it helped me to really love it. You can reach me easily by emailing GamingOnLinux directly.
See more from me
Some you may have missed, popular articles from the last month:
The comments on this article are closed.
40 comments
Page: 1/4»
chepati 20 Sep, 2017
View PC info
Ah, good to know. Thanks, Liam, for posting this info here. As as gamer in his early 40s I no longer am aware what's hip and trending at the moment, so I didn't even know review bombing was a thing. And as I make my purchasing choices based to a large extent on user reviews, I would have been unwittingly manipulated by this scummy practice.

View PC info
Does Steam warn if a game got too many positive reviews?
5 Likes, Who?
Romanovzky 20 Sep, 2017
View PC info

Quoting: ageresDoes Steam warn if a game got too many positive reviews?

I would assume they already track those to prevent fake reviews? Some devs are known to artificially enhance their marks with less legit tactics....
0 Likes

Most of the time, I'm not influenced by the review score. I have some games that I want to buy and others I find interesting or somebody from my friends recommended it to me.

I heard about this problem, but sometimes only thing you need is to look how many hours the person, who write the review, spent playing the game. For me it will be better to see the review from the person with most hours at the top.
0 Likes

Quoting: GuestActually most bad reviews clearly stated that they were negative due to the developers behavior.

Then you would have to read every Review and make your own calculations, if you want to find out how many people made a bad review for the game, not the dev - or another game of the dev - or a game that was just recently announced but is not shipped yet - or a game from the same publisher - or whatever people are mad about.

No matter how directly you state for what reasons you made your review. You are intentionally abusing the system to make a statement. That's not what reviews are for.
0 Likes

View PC info
I was myself part of some "bombing", simply by changing my positive to negative, or the opposite too.

I think it's fair, as it's the only way to show the devs their behavior is clearly not appreciated.

Also, some games have negative score, only because they are not for everyone's taste, but by themselves they can be great if you like the genre...

In my opinion, the whole system is failed anyway, so graph or not, it's really going to change the root.

In the current system, and i am for bombing reviews : if they exist it's not because a famous youtuber said so, it's because, to my experience, the bombed game did something very wrong toward its community. ARK and P.A. Titans are two example i "bombed down".
3 Likes, Who?

View PC info
This brings up the question about the purpose of user reviews - are they there to assess the game itself, or also to rate Developer/Publisher behaviour? Take GTAV as an example, they shutdown the OpenIV Mod site and Steam reviews got bombed hard. The game itself was unchanged, but suddenly it had mixed reviews.
For me, Steam user reviews have sadly become a lot less trustworthy than they ever were. I can't imagine Steam without them though, because without them you are blind to how good the game really is from a user perspective.

Quoting: TcheyI was myself part of some "bombing", simply by changing my positive to negative, or the opposite too.

I think it's fair, as it's the only way to show the devs their behavior is clearly not appreciated.


Nope. If you review it down, people might think that the game sucks. I think what we should have, is sort of a sins page, where users clearly state what their grief is about.

Instead of using reviews, to "bomb" a game, why not have the ability to boo the individual features. E.g. I loved Deus Ex mankind divided so I gave it a positive review, but I also booed its microtransactions "feature". That way people will definitely know what's up, and the developers won't receive undue flak.

I bet if we had it in the day of Witcher 2, we'd probably have the Witcher 3 already.
2 Likes, Who?

View PC info
As an AP Statistics teacher, I do not approve of this at all... Those are NOT histograms, dammit!

View PC info
The only thing Valve cares about is selling games. If the game is an overpriced, broken, hot mess (Ark: Survival Evolved), I don't think anyone should be surprised that Valve are going to ensure it sells by manipulating reviews.
0 Likes
1/4»
While you're here, please consider supporting GamingOnLinux on: