Do you like MMOs but find the PvP combat to be the worst part? Dead Maze [Steam, Official Site] might solve that for you. It's a massively multiplayer cooperative game where you try to restore civilization. 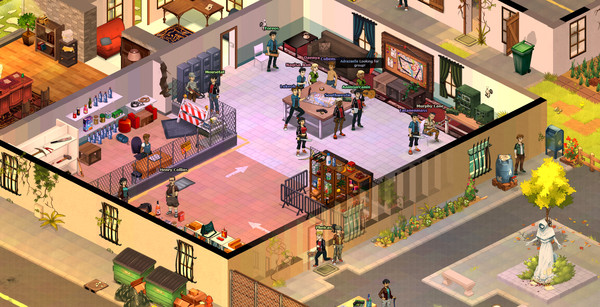 While it is a co-op MMO, that doesn't mean there's no combat. It's a post-apocalypse MMO after a huge tsunami opened the world up to a serious infection, so the world is now filled with Zombies. In order to survive, you will need to group up, find weapons (there's over 500 possible weapons), craft supplies and establish a camp. Here's where it may appeal to many more of you: you can grow gardens of vegetables, breed animals and so on.

We've teamed up with the developer, Atelier 801, to offer Linux gamers a chance to test their brand new Linux build and give feedback on the game as a whole. It's not actually available in public yet, as it's going through a closed beta period. It's going to be free to play at release, with only cosmetic items for purchase.

Note: The developer suggested disabling the Steam Overlay for it to work properly. In my testing on Ubuntu 17.10, it worked fine with it enabled, but the overlay itself didn't work. So if you have issues, make that your first thing to test.

Also, they have a Discord channel you can hop into to group up and provide feedback to the developer.

I've had a little time with it personally and so far I'm quite enjoying it. It feels a tiny bit like Project Zomboid, only with more cartoon-like graphics and a better interface (as well as being online-only). I also really like the story-based introduction to the game, wasn't what I was expecting from an MMO at all. I might actually quite enjoy this one.

As expecting from a beta, there are a few issues with the translations and a few smaller bugs here and there.

I really enjoyed the game so far (about 30+ hours, level 35, i'm done with the main quest now i'm free to grind). It's much mone than a "flash game", it's actually a real MMOG with several great ideas (levels are flat, for once, ie lvl 250 or lvl 10 characters have almost the same hitpoint, gears, possibilities...).

It has very little, r nothing, to do with Zomboid gameplay. Just imagine the zombies are anything else, monsters, gobelins, whatever, and play like a MMOG/Diablo game, not like a survival crafting game. You have to survive, and you can craft, but you cannot fortify a house, set traps, etc, only use skills and weapons like any MMOG/Diablo games.

In french, i did several videos on the game :

View PC info
"No PvP" does that simply mean no player vs player combat, or that there is no inter player competition at all ? ( competing for resources/tech level/prestige )
0 Likes

View PC info
It looks like fun! I can't wait to check it out!
0 Likes

View PC info
I have got one. Will look into it this evening. And kudos to Liam for making such a seamless way to claim a key. Keep up the great work!
2 Likes, Who?

Quoting: rafebelmontI have got one. Will look into it this evening. And kudos to Liam for making such a seamless way to claim a key. Keep up the great work!

Thanks for the kind words, I hand built that little tool so we can prevent people sniping keys since you have to be pre-registered for more than a day to claim one and it's one per account too :)
6 Likes, Who?

Thank you for the chance Liam, I will try it tonight.:)
0 Likes

I'm just not sure how to quit the game properly. At least I haven't found a menu item for that. Just closing the window does work, but is this the official way?

View PC info
Grabbed one and will start tonight.
Thank you!
0 Likes

gomera 5 Jan, 2018
View PC info
Thanks for the key, will give it a try tonight ! :)
0 Likes
1/3»
While you're here, please consider supporting GamingOnLinux on: