I've been on a weird FPS kick this year. Haven't really played a lot of those in the last decade, but recently had the itch for senseless nonsense. I played through Halo 3 about the time that came out in the Master Chief collection, and that lead to playing Red Faction 1 & 3 of all games. Not exactly classics, but enjoyable timewasters that run fine under Proton. Over the weekend my wife and I (almost) beat Lovers in a Dangerous Spacetime, and I also randomly decided to replay Insanely Twisted Shadow Planet since it was relatively short. Both of those have nice native versions.

Still need to finish my first play through of Shadow of the Tomb Raider. It's so good! ... but I've been playing it in like 1 hour increments since the Feral port came out. Gosh... That's got be like a year now? Last November?

@damarrin Ah, yes HL Alyx was fantastic! I've played it through twice now, once in Proton when it came out and a second time in the native version. I do VR work for a living and have been doing it from Linux for like a year now because... why not? The vrserver process definitely doesn't like it when you suspend, though I found simply quitting it before suspend fixes almost all of my non-Unity3D issues though.
0 Likes

I've started my list retroactively, so I don't have a date for when exactly I finished each game. But here are the stats for year purchased (approx.) vs completed yes/no 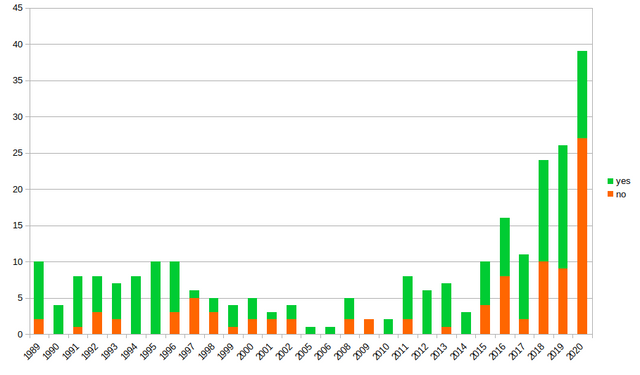 The massive spike this year is mostly due to the BLM bundle from itch.io, but it seems I generally play more games now than back when. Though a lot of games I played in recent years are short indie titles, while as a kid or student those were mostly time consuming AAA games. (I still think I should not let my wife see that graph ;-))
3 Likes, Who?

I completed Diablo 1 (Via DevilutionX on a PineBookPro). Nice nostalgia trip after 20 years. Back in the day I 255 maxxed out my mage character ;)
Was a bit surprised how short the actual single-player campaign of Diablo1 is.

Quoting: JuliusUgh, 2005/2006 must have been a difficult time for you? Edit: a wait, it is even missing some years. I guess some non-gamer time then ;)

Yeah, so early 2000s I was quite occupied with writing my own game instead :-). But there's also a period where my gaming desktop was located on the wrong side of the Atlantic Ocean. So for about 15 months all I played was Oblivion on my employer issued laptop, probably at 640x480 and with low details.

And just maybe those years weren't particularly great for PC gaming anyway, or at least had few games I would have been interested in. My collection to date doesn't contain a single entry that originally released in either 2003 or 2004.
0 Likes

Yeah, wasn't the best time for gaming and since around that time I switch more or less full time to Linux I think I mostly played Unreal Tournament 2003/2004. Those had a really nice Linux port back in the day ;)

Props for actually making and releasing a game... my projects from that time barely got beyond the brainstorm phase :(

Just finished Leisure suit Larry : Wet dreams dry twice, not the best of the bunch but still enjoyable if you like the serie. Worked great with Proton 5.13.
0 Likes

Call of the Sea

A very relaxing puzzle game, some nice environments and a pretty good story.

Almost perfect with the latest Proton. There are a few occasions where you read a letter and apparently there’s a video that’s supposed to be playing in a rectangle that appears on screen, but the letter is read aloud so no story bits are lost.

It’s quite buggy, apparently on Windows people are having serious problems with it. I did have some, but nothing completely game-breaking. Although I did have to restart a chapter at one point.

Rise of the Tom Raider.

I liked it better than the first one, or at least I felt like I knew my way around it better. The atmosphere, the setup, graphics, sound... everything was pretty exciting. Consequently, I bought Shadow of the Tomb Raider, but haven't started it yet.

It's also a native game, which it gives it more points.

Nuclear Throne - no way near (it is much too quick for me on keyboard and mouse)
Crypt of the Necrodancer - final bosses keep on beating me
Darkest Dungeon
Cultist Simulator
..


Plenty of games I start and then put down, and don't pick up again:


Okay, I have finished some:


I guess I could add - It's the journey, not the ending.
0 Likes

Me 2. I get bored or frustrated and wander off

I did manage to best Factorio over the summer. That was nice. I've also been on a bit of a FPS kick recently and am playing through the STALKER series. Runs fine in wine. I'm on the third game, but the first so far it's my favorite (#3 is a very close second and very fun)
0 Likes
«2/6»
While you're here, please consider supporting GamingOnLinux on: