Liberapay or Buy us a Coffee. You can also buy games using our partner links for GOG and Humble Store.
Speedrunning software for Linux

I've watched some videos of speedrunning for Hollow Knight, and it looks totally insane, but also a little intriguing, and it made me wonder if it was possible to do on Linux. The common software for recording time is apparently LiveSplit. I asked in the speedrunning channel on Hollow Knight's Discord channel, and they seemed doubtful it would work on Linux, even through Wine. From what I can find with startpage searches, people have problems, for example with hotkeys not working.

Do any of you have any experience with this? Is it possible to get it working on Linux?

I'd be miles and miles off being competitive, but I figured it might be fun to get it set up correctly anyway, to see if I can make personal progress with simple runs, while also being eligible for submitting them.

In Hollow Knight's case, this is the page. Beating the game in barely half an hour is crazy, but there you go! :D
0 Likes

I'm currently exploring this myself. For me I think "Flitter" by Alexozer will be the best option, but it's a bit of a pain to configure.

The most likely "best" way would be to run livesplit server through wine and use https://github.com/christofsteel/pyautosplit to autosplit for you!

But, if you just want hotkeys to split with yourself I'd say check out Flitter and maybe https://github.com/CryZe/livesplit-one-desktop but the latter is pretty mediocre.
2 Likes, Who?

Thanks, I'll look more into that. Meanwhile I got Livesplit running, but something isn't quite right, because I couldn't get the timer to start when I was in the game, nor the autosplit. Kinda strange that this doesn't appear to have proper support/solutions on Linux. I'm so used to everything working (as opposed to the myth).

Let me know if you get your game working. It looks so nice on the videos I've seen, with the splits moving to the next goal, without any user input. The timer even starts, and stop/starts a few times depending on cutscenes.
0 Likes

Did you try with pyautosplit?
0 Likes

Got an error of one type or another when trying to install it. However, it looked very difficult to get it set up, based on the provided examples. From what I understand, autosplitting needs memory access, maybe internal game variables, and naturally I have no idea what those might be for this particular game. Looked like much the same is required for the route as well.

Pretty sure that is exactly what was done for the Hollow Knight Livesplit autosplitter, but it sadly only works for Windows. I joined their Discord the other day and asked around, and apparently nobody got it working. The advice was to either use real-time (with manual splits), or get a dualboot with Windows so that LiveSplit would work correctly (where in-game time + autosplitting works, including pausing the timer when the user isn't in control).

Managed to sort of get Livesplit One Desktop working, but it was a pain to change anything. Had to use the web version as a middleman, and save splits and layout there, and then copy the files over to where the desktop/standalone version could access them.

The good news is that I did get OBS up and running and recording a test run, with the timer on screen and quite transparent. That was nice. Only have one monitor, so can't see the timer with checkpoints while playing. 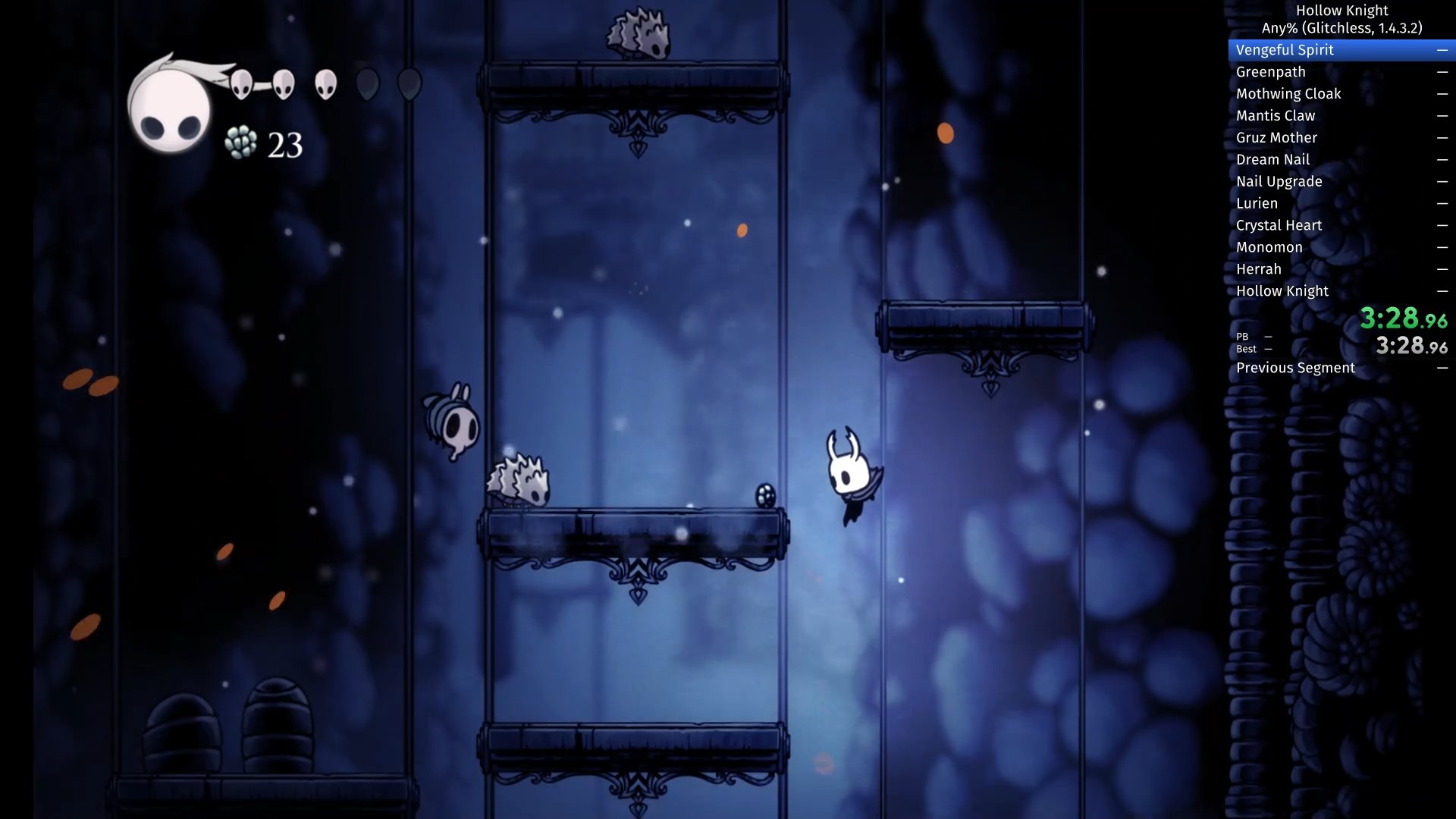