This website makes use of cookies to enhance your browsing experience and provide additional functionality -> More info Deny Cookies - Allow Cookies
⨯ We're live now on Twitch!
⨯ You can sign up to get a daily email of our articles, see the Mailing List page!
Latest Comments by scaine
Survival game Vintage Story gets an official mod database, improved Wayland support
4 March 2021 at 2:55 pm UTC

Quoting: scaineIt's the curse of the voxel engine game, I suppose, to always be compared to Minecraft. This plays nothing like Minecraft, from what I can tell. The depth in this game far surpasses anything Minecraft offers, even in modded servers. However, the core engine looks enough like Minecraft that people just blink and move on. It's a real shame.

Erm.. you know that this game has his roots in Minecraft, right? It was released as a Minecraft-Mod before it became a standalone game. Also you can find a lot of the mechanics still in Minecraft Mods.

Sure. You know that Rocket League started life as an Unreal Tournament mod, right? Or Team Fortress as a Quake mod?

My point is that those games don't look anything like their original mods/inspirations. But Vintage Story choose a voxel engine and as a result, no-one can see past that. "Just another minecraft wannabe", however, is as insulting as it can get for the dev. This plays very little like Minecraft, but looks enough like Minecraft, that it's frustratingly common.

Not just this game, of course. The wannabe statement has been popular for decades. Sometimes it's valid, I suppose, but I prefer to dig a little deeper most of the time.
View this comment - View article - View full comments
Survival game Vintage Story gets an official mod database, improved Wayland support
3 March 2021 at 2:46 pm UTC Likes: 2

It's the curse of the voxel engine game, I suppose, to always be compared to Minecraft. This plays nothing like Minecraft, from what I can tell. The depth in this game far surpasses anything Minecraft offers, even in modded servers. However, the core engine looks enough like Minecraft that people just blink and move on. It's a real shame.
View this comment - View article - View full comments
Try the demo of Dashing Dodgems, a frantic and hilarious bumper cars party game
3 March 2021 at 2:40 pm UTC

Super Smash Bros, but in cars? Haha, I love it! It has a real late-90's Sega vibe to it too!
View this comment - View article - View full comments
Portal 2 gets more DXVK Vulkan improvements with another update
2 March 2021 at 6:06 pm UTC Likes: 2

Not sure I agree with the hot takes that the first is better. It certainly had the impact for the novel new gameplay, sure, but it was chock-full of rough edges. I'll always have a nostalgic soft spot for it, both for the novelty of the gameplay and that fantastic end-of-game music.

But the second is so much better. The environments are bigger, bolder. The characters, GladOS, Wheately and Cave (Cave Johnson, what a character! Absolutely epic voice acting from JK Simmons!), all gel (geddit?) so wonderfully. And that ending! But it's also just simply more fun. The gels in the game are so enjoyable to use, so satisfying.

So yeah, it wasn't the "first", but Portal 2 is certainly the better of the two, in my opinion. And I didn't even mention the incredible co-op...
View this comment - View article - View full comments
Building a Retro Linux Gaming Computer - Part 1: Dumpster Diving
1 March 2021 at 8:19 pm UTC Likes: 4

Back when this PC came out, my only experience of Linux was playing about with LiveCDs, such as Mandriva. It wasn't a great desktop back then - manually mounting CDs and USB sticks, and trying to figure out the correct AT&T commands to script up an internet dialler!

My god, we take so much for granted now...
View this comment - View article - View full comments
Play Wolfenstein: Enemy Territory with the new release of ET: Legacy
1 March 2021 at 1:39 pm UTC Likes: 1

I played a LOT of this game back in its (original) day. It led me on to ET: Quake Wars too, which was another massive time-sync. Happy memories.
View this comment - View article - View full comments
The February 2021 round-up here's our top articles
1 March 2021 at 1:36 pm UTC

Absolutely incredible work. Also, a great month generally between launches of both Valheim and Hadean Tactics. And Loop Hero is just around the corner too!

Now if we can just get out lockdown, I'll be a very happy (and quite possibly drunk) bunny.
View this comment - View article - View full comments
Reminder: Update your PC info for the next round of statistics updates
1 March 2021 at 12:10 pm UTC Likes: 1

Quoting: amataiSure. But transitioning from "no tux, no bucks" to "no tux, bucks" will take a few year more for me before feeling natural.

I've mentioned it before, but for me Proton can mean "no Tux, some bucks." Without Linux support there's no way they're getting full price, but if they haven't made their game not work in Proton then there's a chance they could get a couple of quid. More if they've committed to keeping it working, rather than having it work by accident and stop working at some point in the future by accident.

That's a great point. Every single game I've bought that's Windows-only has either been through Humble Choice or an absolutely mahooosive sale on Steam. Like 75%+ sale. Meanwhile, I'll generally pay full price for a Linux native game.
View this comment - View article - View full comments
Plasma 5.21 rolls out as one of the best looking Linux desktops available
26 February 2021 at 5:15 pm UTC

Quoting: scaineI mean, how stupid a decision is it really? That I had to install Thunar AND geany, just so I could make a single line edit to my file, the way I've done so for years, and the way that I can do so on every other desktop environment available? That's... pretty stupid, I reckon.

On KDE Plasma on can install Konqueror in under a minute. By the way, it's a really awesome Midnight Commander, twin pane file manager (and more).

QuoteKonqueror is KDE's Webbrowser and swiss-army-knife for any kind of file-management and file previewing.

Someone further up also mentioned Krusader, too! I'm not actually a huge fan of split-pane file explorers, but I do prefer file explorers which offer the facility if required. I tend to replace Nautilus, with its fork, Nemo, for that very reason. Nautilus patched out F3, whereas Nemo keeps it available. Very handy for when you have multiple file copies to perform.

I did give KDE another few hours of airtime on my laptop, via Endeavour O/S, a few days ago. However, I quickly ditched it - more a reflection on Endeavour than KDE though. I get why Liam like Endeavour, but at its core, it's still Arch, and needs soooo much more work for basic things. I went on to try Elementary OS, but was put off by how custom everything felt. That and the fact that they really push the paid apps at you in their store. Which is kind of awesome really, but it's little in your face. I jumped ship to Pop OS, which I'm continuing to run now, day three. It's okay, but Gnome Shell is generally such a gigantic step back in functionality. I'm not sure I can stand it. I'm going to persevere for a few weeks at least, however, before deciding whether to reformat back to Mint. Give it a chance to win me over.
View this comment - View article - View full comments
Reminder: Update your PC info for the next round of statistics updates
25 February 2021 at 4:41 pm UTC Likes: 5

Quoting: scaineWho the hell is this absolute mentalist? Utmost respect, if not trolling... 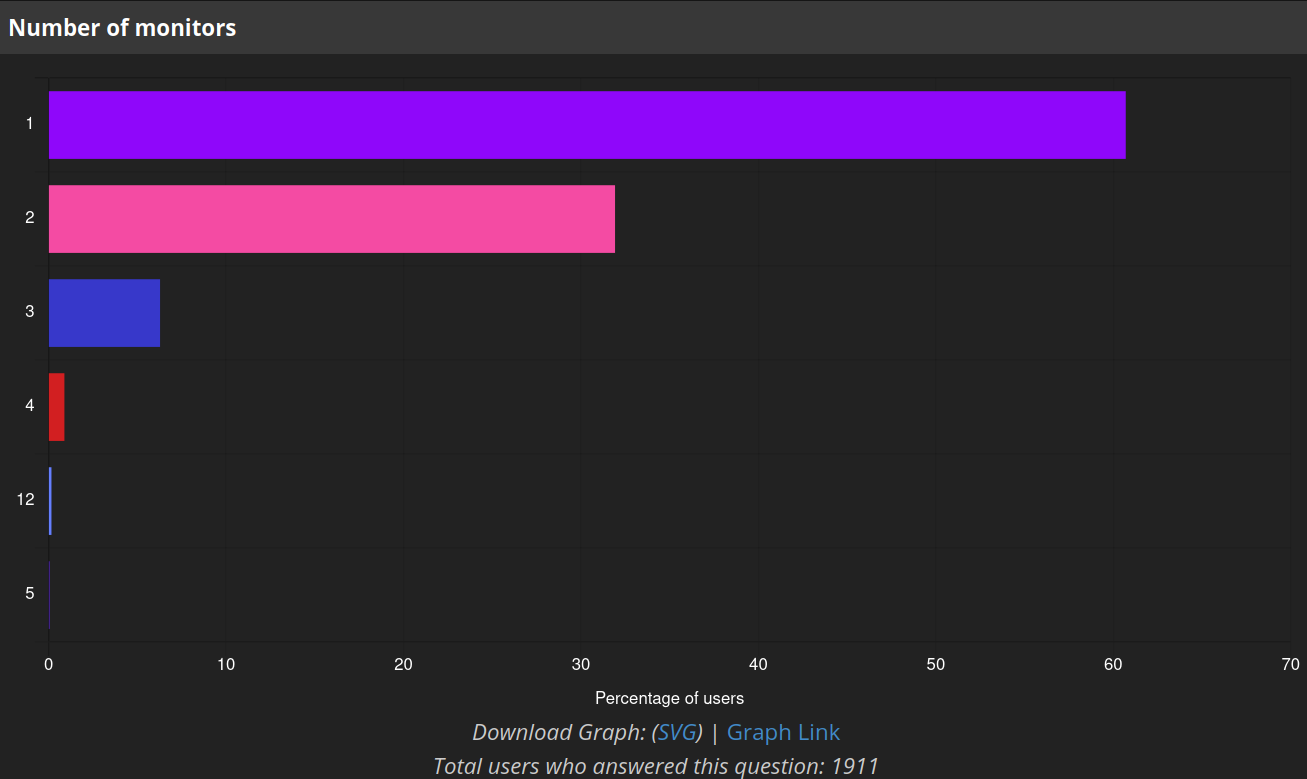 Edit to add... holy cow, there are THREE such people. Three. smh.