Continuing on from my previous articles on how to get both Doom 3 and Quake 4 running on modern Linux systems, I felt the time was right to look at Prey, another id Tech 4 based game with a native Linux port. One of the few games developed on the engine not to be directly related to id Software, it did not take me long to discover that the main issue people were likely to run into with Prey had nothing to do with the game itself. 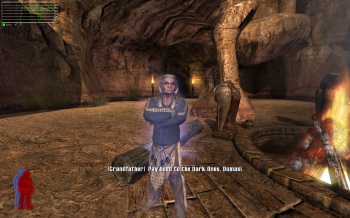 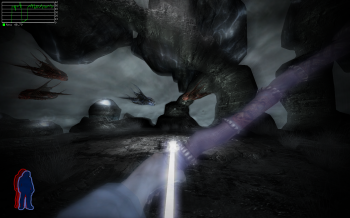 For a game with as much history behind it as Prey, it is remarkable how buried it has become. Word of the game first came out way back in 1995, before 3D Realms had even released Duke Nukem 3D, and from there it went through several iterations and passed through a number of different hands before finally seeing the light of day in 2006. The only reason why Prey is not often told as a cautionary tale in game development circles is that it was less of a debacle than Duke Nukem Forever.

Being no stranger then to having its name pushed out of the limelight, it is perhaps unsurprising that Prey would go on to have its name stolen outright, with current owner ZeniMax Media applying it instead to a game intended to be a spiritual successor to a different franchise entirely. Adding salt to this particular wound is the fact that new copies of the original Prey have been unavailable for purchase since 2009, due apparently to the publisher running out of CD keys.

What this means for Linux users wanting to hunt down their own copy of the game is that they are now put in the ridiculous situation of trying to find old retail copies of Prey, while at the same time being forced to dig through the significant internet presence that the new game has attracted. I was spared this by already having access to an old retail copy, but I still found myself becoming frustrated when trying to look up new information about the game.

Prey was brought to Linux by Ryan Gordon in 2008, coming as something of a surprise as developer Human Head Studios had previously stated back in 2006 that they had no interest in a Linux port. Like with the Doom 3 and Quake 4 ports by Timothée Besset this took the form of an independent installer that requires access to the data from a Windows release of the game in order to work. Being an independent contractor, Ryan Gordon still hosts the installer on his own icculus.org website.

One unique aspect of the Prey installer is that it will by default search for a mounted CD or DVD rather than having you copy over the data yourself. This can be overridden if necessary by passing the "--from-install --media" parameter to the installer from a terminal window followed by the path to a directory containing the relevant files. From there the rest of the game's set up should be taken care of automatically by the installer.

Being a more recent port I anticipated that I would run into fewer issues than I did with Quake 4, and that was indeed the case. I did have to remove the bundled libgcc_s.so.1 file from the install directory in order to get the game to launch, but from there everything else was fine except for the game's sound. While Prey does have the benefit of supporting OpenAL directly rather than ALSA or OSS, it was still misconfigured by default leaving me with crackling audio.

I resolved this by creating an autoexec.cfg file in the hidden ~/.prey/base directory with the following lines:

Please note that the actual library path may vary based on your Linux install, and that this does require you to have the 32 bit variant of the OpenAL library installed. As to be expected Creative EAX ADVANCED HD audio technology is also once again not supported by the Linux version of the game. 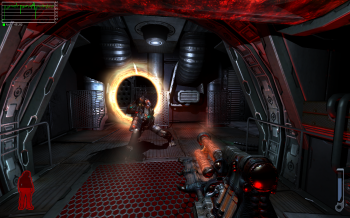 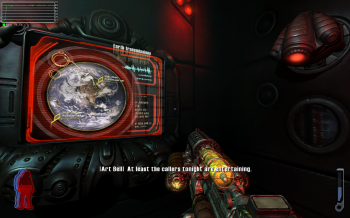 When Prey does get remembered, it is usually for its gimmicks. The game's levels are full of neat navigational tricks such as portals and places with variable gravity, and the protagonist Tommy will also eventually gain the ability to spirit walk, allowing him to leave his body to reach otherwise inaccessible areas. These same powers also make it impossible for him to die. Instead, his spirit must fight with those of the dishonoured dead until it is brought back to the land of the living.

This all sounds very involved, but most of these features are actually rather superficial, which has led to a backlash against the game in some quarters. At its heart Prey is very much a classic first person shooter in the same way that Quake 4 was, just with some novel visual and gameplay quirks added. None of this is surprising coming from 3D Realms, who for a time excelled at making classic first person shooters with novel visual and gameplay quirks, but it stood out in 2006.

When taken like this Prey can be very enjoyable, even with its melodramatic and often absurd plot centred around Cherokee mysticism and a near never ending quest to save your girlfriend. In fairness an effort was made to involve indigenous actors, with both Michael Greyeyes and Crystle Lightning being Canadian Plains Cree. On the other hand there is John William Galt, who is most well known for voicing Lo Wang in the original Shadow Warrior. So yeah, there's that.

Coming back to it I was surprised by how short the game is, with it seeming far longer when played on insufficient hardware, but by and large it does get its pacing right. The levels leading up the game's denouement are particularly satisfying, inviting you to cut loose in a sensational fashion. Playing on the harder Cherokee mode was disappointing though, with the removal of health spores just making death in the game even more of a trudge than it was before.

Above all else, Prey is theatrical. With its sweeping orchestral soundtrack and mind bending levels, the game's highest priority seems to be in providing spectacle. It is in the little touches that the game truly shines though. Whoever decided to bring Art Bell on board to record a fictional version of his radio call in show Coast to Coast AM to be heard throughout the game's levels was a genius, and I am not even going to spoil what starts playing on the jukebox while you are being abducted.

Well, this was a discouraging article to write. Prey is far from being unique in entering its present state of publishing and distribution limbo, but most other games never had to suffer the indignity of having their entire identity taken out from under them the way that Prey now has. For those that can get their hands on a copy Prey it is still well worth the time to get running, especially for those of us who can still remember when its arrival on Linux was a pretty big deal.

Article taken from GamingOnLinux.com.
Tags: Action, FPS, HOWTO, Review
20 Likes, Who?
We do often include affiliate links to earn us some pennies. We are currently affiliated with GOG, Humble Store and Paradox Interactive. See more here.
About the author - Hamish

Hamish Paul Wilson is a free software developer, game critic, amateur writer, and farm labourer living in Alberta, Canada. He is an advocate of both DRM free Linux gaming and the free software movement alongside his other causes, and more information on him can be found at his icculus.org hompage where he lists everything he is currently involved in.
See more from me
Some you may have missed, popular articles from the last month:
The comments on this article are closed.
33 comments
Page: 1/4»

View PC info
I played this game back in 2007/2008 or so and I installed it and starting playing it again a few months back. It's a very fun and ingenuitive game IMO.
0 Likes

View PC info
I feel fortunate to have an original retail copy then.

One of my old favorites this game. Deserves more credit than it typically receives IMO.
0 Likes

View PC info
A very timely article as the game is now available through backwards compatibility on Xbox one
1 Likes, Who?

Traversy 15 February 2018 at 1:26 am UTC
View PC info
I too have a copy of this game. Got it for $2 from a blowout sale, and did not play it past the first few levels until I switched to linux.

I had the CD version and my complaint is that the 1st and 2nd CDs had to be unmounted via commandline. Dolphin didn't unmount properly and so the next disc wouldn't be detected at the same mount point by the icculus installer.

I'd also liked to have tried the multiplayer. Anyways it's a great game and a testament to the game porting prowess of icculus.
0 Likes

syxbit 15 February 2018 at 2:52 am UTC
View PC info
I thought the new Prey was going to be a sequel that was then made into a origin story. I had no idea they just stole the name.
0 Likes

WJMazepas 15 February 2018 at 3:02 am UTC
View PC info
I want so much to play this game on a PC. I only played on a Zeebo, a brazilian console, and it was kind of trash.
0 Likes

View PC info
I played Doom 3 and Quake 4 on Linux when they were new. When Prey was released to Linux, I then purchased it to have a new game to play (weren't a lot of options back then). If memory serves me, I think it had the issue even back then of the crackling audio which required the same fix you performed.

This was also one of the rare games that could have its key put into Steam to be added to your Steam library, which I did, but never played it there as it was only available for Windows in Steam.

After these 3, I think Quake Wars was the last game I purchased with CDs that was playable on Linux. Unless you count the Orange Box, then that would be the last one, but since it is available digitally as well through Steam, I do not consider it.
1 Likes, Who?

syxbitI thought the new Prey was going to be a sequel that was then made into a origin story. I had no idea they just stole the name.

In fairness Bethesda did at one point have a Prey 2 in development, but things got messy fairly quickly:
https://en.wikipedia.org/wiki/Prey_2

View PC info
It's shame that near the release of original Prey 2, Bethesda wanted to acquire Human Head Studios that eventually got rejected. After that incident, Bethesda cut the monet flow, introduced unreasonable deadlines, finally took the project from Human Head and then ultimately canceled it. When you beg Bethesda to release Doom, Quake, Wolfenstein, Elder Scrolls for Linux, remember that...

Here are in-game videos and screenshots of cancelled Prey 2: