Battle Royale game Crazy Justice just had an update to the closed beta, we have keys to give away

Fancy getting in on the action? Black Riddles Studio has finally released an update to Crazy Justice [Steam] and we have some keys available. For a little history on it, see my previous article. 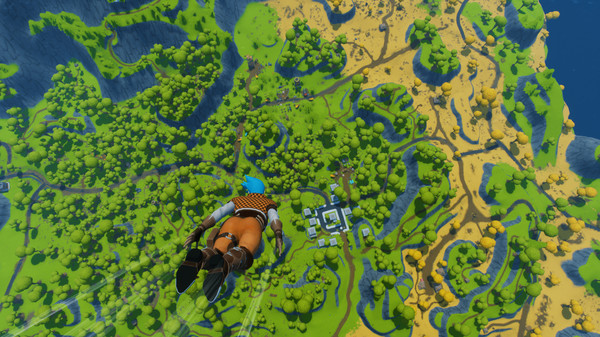 The game is currently in a closed beta, while they sort out all the kinks and get it into a properly playable state. The initial release was in pretty poor shape, but they’ve stuck at it. It’s taken them a while, but I’ve confirmed it personally that the Linux version does indeed work better now with plenty of caveats.

Performance still needs to be improved, especially when you’re about to jump from the ship onto the island as the FPS drops quite hard there. Once you jump out and land, it’s mostly okay again. I assume they need to work in a system to reduce view distance and resolution of the island while you're on the ship up high to improve performance (like other games do). They also have an issue with the render distance always on the lowest, so you might find yourself tripping other things as they suddenly appear right next to you. I've been told a hotfix may arrive tomorrow to solve the most pressing issues found.

There’s plenty of rough edges (that's being kind), however, I can finally see some promise in it now I’ve actually been able to jump on in and test it out myself. To be clear though, there's a rather large amount of bugs right now which I will continue to report to the developer.

Warning: Don’t jump into the water when you’re on the lobby island as it counts down to the start, you will die.

Warning #2: Make sure your password is at least 8 characters long. An issue will prevent you logging in if it's less.

They haven’t actually put up a changelog yet, so the exact fixes aren’t clear. Here’s what I know:

“Shut up already, where’s the keys”

These keys are available to anyone registered and logged in on GamingOnLinux who has an account older than one day to prevent mass sign-up spam for people key poaching. If you sign up, you have to wait 24 hours.

If you wish to attempt to play with others, feel free to join our Discord Channel to arrange games to join around the same time.

Article taken from GamingOnLinux.com.
Tags: Battle Royale, Beta, Giveaway, Indie Game
28 Likes, Who?
We do often include affiliate links to earn us some pennies. We are currently affiliated with GOG and Humble Store. See more here.
About the author - Liam Dawe

I am the owner of GamingOnLinux. After discovering Linux back in the days of Mandrake in 2003, I constantly came back to check on the progress of Linux until Ubuntu appeared on the scene and it helped me to really love it. You can reach me easily by emailing GamingOnLinux directly.
See more from me
Some you may have missed, popular articles from the last month:
The comments on this article are closed.
70 comments
Page: 1/7»

View PC info
These keys are from a Beta Testing pool, does that mean they are going to be revoked once the game is fully out?
2 Likes, Who?

Quoting: hardpenguinThese keys are from a Beta Testing pool, does that mean they are going to be revoked once the game is fully out?

No, as the BR modes will be free to play so it won't matter at all.
3 Likes, Who?

View PC info
Thanks a lot for the keys!
0 Likes

View PC info
Is there no way i can grab a key for my friends? They'd only create an account now, so they wouldn't be able to grab a key.

As for my account not having many interactions with the site: I'm just a lurker hehe.
0 Likes
Beemer 29 Sep, 2018
Thanks!

View PC info
We just tried a few games, it's still not in great shape. Have reported numerous major issues to the developer.
3 Likes, Who?

View PC info
Yeah the game is in a sorry sorry state.

Too bad because cartoony shooters are generaly my jam . But oh well ... We'll see if they bother to update even just once.
1 Likes, Who?

View PC info
A list of things that really need urgently addressing that I found so far:

1) game doesn't end when only one playing is left
2) game sometimes doesn't tell you when you kill someone
3) the "you killed x" text sometimes won't go away
4) a player dropped in front of me, their helicopter backpack never vanished
5) killed a player as a goat, they still had the heli and both the heli and the goat didnt vanish when i killed them
6) There's practically no sounds
7) Massive FPS drop when in the ship preparing to drop, likely as they're not downscaling items from far away
8) There's no list on the screen when someone dies, or when someone else kills someone or when someone leaves the game
9) You can jump into the water and die in the Lobby
10) Needs a player list and player names above heads in the Lobby
11) View distance seems to be forced on Low, items pop up right in front of you
12) Some items to pick up spawn too high
13) When shooting out a wall, you can't shoot through the holes you've made, only when the entire part is destroyed

To be fair, the majority of those don't seem like they're going to be too difficult to fix but they all add up to make it messy.
3 Likes, Who?
1/7»
While you're here, please consider supporting GamingOnLinux on: