It's hard to believe that until now, Beneath a Steel Sky wasn't available on Steam. With the launch of the sequel Beyond a Steel Sky recently, Revolution Software decided to fix that.

Currently, the build on Steam is only officially available for Windows. Thankfully though, with it being such an old game now from 1994, it's easy to get it running on Linux and through Steam directly too thanks to the Steam Play feature in the Linux Steam client. Remember, Steam Play is just a feature to run compatibility layers (the biggest being Proton) and there's one named Roberta designed for running adventure games like this using a native Linux build of ScummVM.

Instructions (make sure you have scummvm and inotify-tools installed). Open a terminal app of your choice, and then go into the compatibility tools folder (create it if it doesn't exist):

Once done, you can open / restart Steam and it will show up as an option in your Steam Play settings when you right click -> Properties on a game:

Currently though, there appears to be an issue you might encounter with ScummVM 2.1 (at least on Arch / Manjaro Linux) with it not working. If this happens to you as well, you can use this as a launch option (Right click -> Properties -> Set Launch Options...): 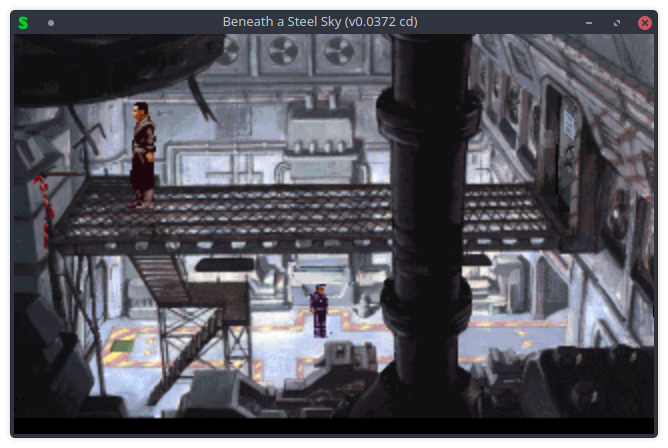 The question is though: why would you want to play it on Steam when it's been available elsewhere easily on Linux for a number of years? Simple: because you can. Minor jokes aside, it's more a matter of personal preference and convenience. Plenty of people want all their games in one place, this may help with that.

Find Beneath a Steel Sky free on Steam. Otherwise it's available on GOG, various Linux distributions have it right in their repository / software centres to install easily too.

View PC info
I excitedly bought Beyond* on release but wanted to replay Beneath* first, which I have on GoG, but it's so much more likely to happen now it's on Steam. Thanks for saving me from messing around with the config.

t3g 29 Jul, 2020
View PC info
GOG has the Linux version too for free for as long as I can remember: https://www.gog.com/game/beneath_a_steel_sky
4 Likes, Who?

The respective package is also, at least, available for Arch and Fedora.
3 Likes, Who?

The respective package is also, at least, available for Arch and Fedora.

My comment was meant to be taken with a pinch of salt (hence the smiley)! I was simply making an gentle observation that not everyone uses flavours of Ubuntu/Debian and that other distros have different ways of doing things with different commands (e.g. zypper and yum).

My distro even comes with a link between apt-get and zypper for those who forget!
0 Likes

View PC info
Pfft. Some of us have a boxed copy.

I played free on suse many years ago, and it could be installed with the package manager (I don't remember the name).

Quoting: DuncPfft. Some of us have a boxed copy.

I still have my copy, but it's the Amiga version.

Quoting: DuncPfft. Some of us have a boxed copy.

I still have my copy, but it's the Amiga version.

Mine too. If I'm honest, it's probably not a game I would have bought myself back in the day, but a friend sold me his entire collection with his A1200 when he switched to a DOS PC.
0 Likes
1/2»
While you're here, please consider supporting GamingOnLinux on: