The free and open source game engine and editor GDevelop continues maturing, with new features constantly being pulled it to make it more powerful. If you missed it, a recent previous release added a live preview feature.

Never heard of it before? GDevelop is a full-featured, open-source game development software, allowing to create HTML5 and native games without any knowledge in a specific programming language. All the game logic is built up using an intuitive and powerful event-based system.

Release '5.0.0-beta99' is now live, which continues expanding the graphical power with the addition of support for dynamic 2D lights. So you can now add a Light object to scenes, with a customizable colour and radius which looks and sounds extremely useful. Testing it myself, it does work really well and it's super easy to use.

Pictured above, is also the newly included 'Game Feel Demo' example included to show off a collection of small effects, tricks and general tips for making your game feel better. I added the new dynamic light to it, attached it to the moving gun object and you can see it in action together. Even with my very basic understanding, I was able to set it up ridiculously quickly. Shows the power of GDevelop. It's a nice a example project too, giving you some helpful pointers on getting your games to feel a bit more impressive.

Also in this release is support for customizable keyboard shortcuts, so you can really tame the editor to your own workflow. Pretty useful addition! Another dark theme was also added named 'Solarized' which you can see pictured below (click to enlarge): 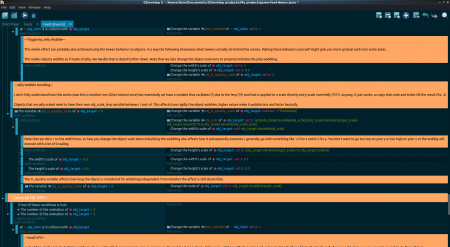 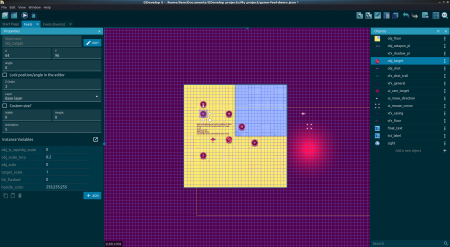 On top of all that there's also an experimental Peer-to-Peer communication, which they said should enable some simple multiplayer games. It's quite a "low level" feature too, so it requires setting up correctly, unlike the new dynamic lighting which is pretty much just drag and drop.