Fedora 33 released with lots of improvements to the Linux desktop

Sponsored by Red Hat, the Fedora Linux distribution has today released Fedora 33 which brings in numerous improvements for desktop users.

For desktop users, Fedora Workstation is what you're looking for if you want what they claim is a "just works" Linux experience. Fedora 33 pulls in GNOME 3.38 'Orbis' which by itself is a pretty big upgrade, see our previous overview on that here. They're also now using the BTRFS filesystem as the default, which is again quite a major change that includes lots of advanced features for those who want it but for desktop users it shouldn't be a noticeable change. The Fedora team mention that the switch to BTRFS is laying the foundation to build upon in future releases. 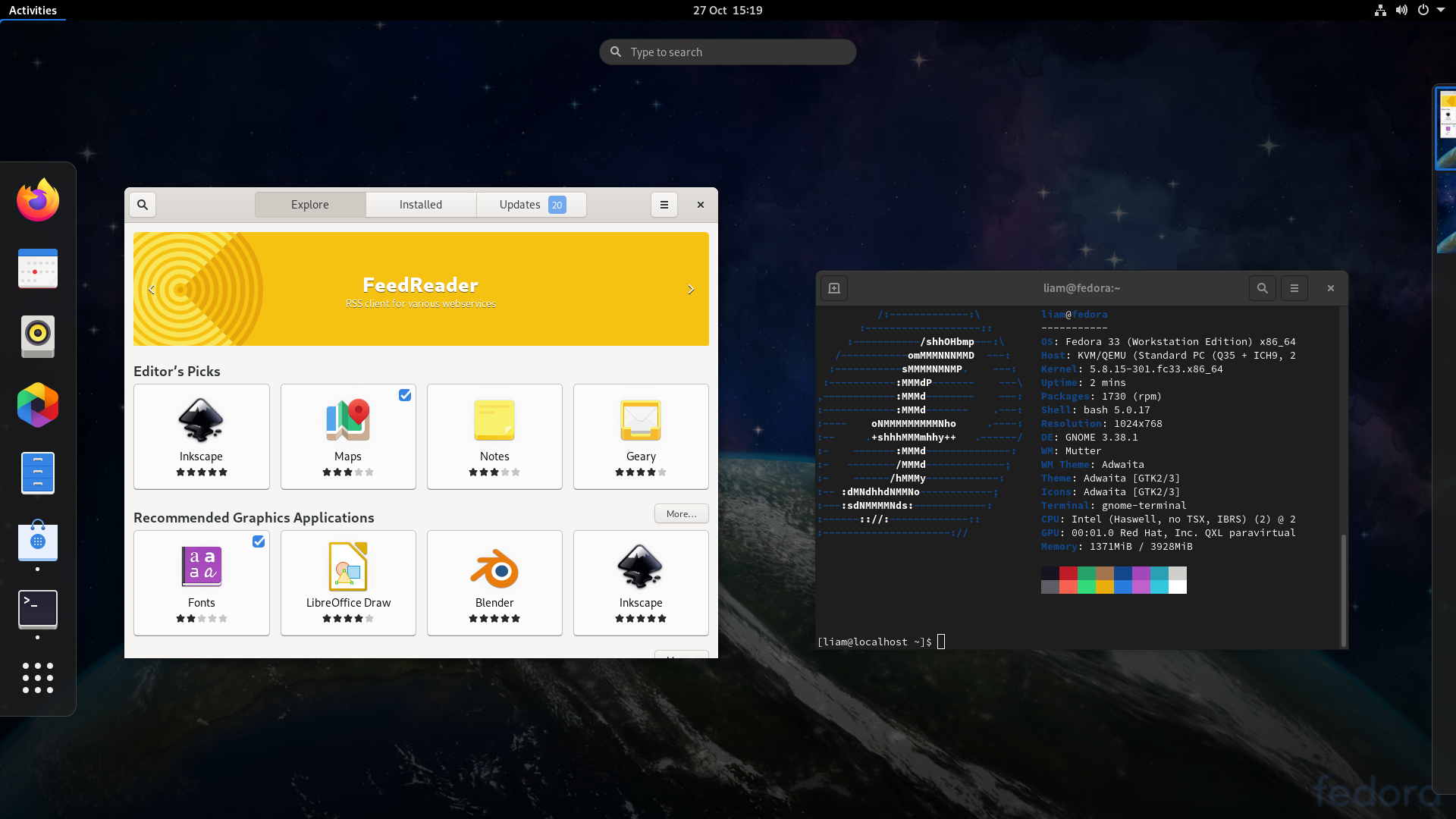 This release also brings in an animated background (based on the time of day) by default which is pretty slick looking. As part of Fedora's "First" mission they try to include all the latest and greatest software and with Fedora 33 you get the likes of Python 3.9, Ruby on Rails 6.0, and Perl 5.32 as default. In their KDE edition, they've also enabled the EarlyOOM service by default to improve the user experience in low-memory situations.

If you make use of the Wine compatibility layer, this release should also now use the Direct3D to Vulkan translation layer DXVK as the default instead of wined3d which should give much better performance in Windows games run through it. As after we covered the proposal, it was approved. Fedora 33 ships with Wine 5.20 and DXVK 1.7.2.

You can see the release announcement here, release notes here and download from here.

Article taken from GamingOnLinux.com.
Tags: Distro News, Fedora, Update
24 Likes, Who?
We do often include affiliate links to earn us some pennies. We are currently affiliated with GOG and Humble Store. See more here.
About the author - Liam Dawe

View PC info
This is good but boring release. Most of "fresh" distros provide all these features from years. Like brtfs, LTO by default or PGO or even EarlyOOM.
But I appreciate that Fedora is following a trail hollowed out by slightly smaller distributions. Now it's time for LLVM / Clang by default.

This is the most fascinating one for me! Thanks Red Hat & Fedora team!
0 Likes

Is this fromm Gnome 3.38? or does another package handle the animated background, am curiousabout doing this on my install.
0 Likes
Linuxer 27 Oct, 2020

Is this fromm Gnome 3.38? or does another package handle the animated background, am curiousabout doing this on my install.

I've no idea... But i've used Komorebi before.

View PC info
I wonder if Fedora will upgrade to XFCE 4.16 within the 33 cycle. (There's already a copr for it, though I'll stick with the official release.)
0 Likes
skye 27 Oct, 2020
Personally Lubuntu has been my "it just works" distro for many years at this point. The ui is functional, not distracting me with flashiness and I get to benefit from ubuntu being the primary target for most devs while being generally sheltered from unpopular decisions ubuntu makes. As an added bonus I like Lubuntus colour scheme.
1 Likes, Who?

View PC info
BTRFS as default on a desktop distro... guess we'll find out how that experiment turns out before long.

Is this fromm Gnome 3.38? or does another package handle the animated background, am curiousabout doing this on my install.

Uhm.. GNOME have shipped with that feature for years. I'm guessing this is just Fedora shipping with one of them as the default for the first time?

Check the backgrounds in GNOME settings. The ones with a little clock in the corner changes.

Quoting: dpanterBTRFS as default on a desktop distro... guess we'll find out how that experiment turns out before long.

openSUSE has been using it by default for years. It works fine and is a lifesaver with snapper and the ability to boot previous snaps.
4 Likes, Who?

Quoting: dpanterBTRFS as default on a desktop distro... guess we'll find out how that experiment turns out before long.

openSUSE have done done it for a few years now, seems to generally work fine. It is also better tuned to be used as a default for the general masses than ext4 these days since it allows things like checksumming, compression, snapshots and copy-on-write while still being a widely used and integrated system compared to say ZFS.

Your average user or gamer will not be limited by the performance difference compared to EXT4 or XFS and can in some cases actually benefit from compression for reduced load-times on rotational drives.

For average Joe it doesn't really matter which file system crashes, they are not going to be fixing attempting to fix it regardless so the confusing docs are not really an issue either.

With my support-technician-hat on, I think it is a rather good default, and those that know they have specific demands also have the know-how to choose one that suits our workload better.
2 Likes, Who?
1/3»
While you're here, please consider supporting GamingOnLinux on: