Back when the space race was at its peak, the USA and Russia were trying to be first but what about if there was another behind the scenes trying to get the crown?

That's the idea in Moonshot - The Great Espionage. You work for a fictional country Ustria, as it becomes a three-way battle for space supremacy. You're part of the Ustrian Secret Service and get front-row seats in this stealth puzzle-platformer as you infiltrate the competition and try to access secret plans to help push Ustria forwards. 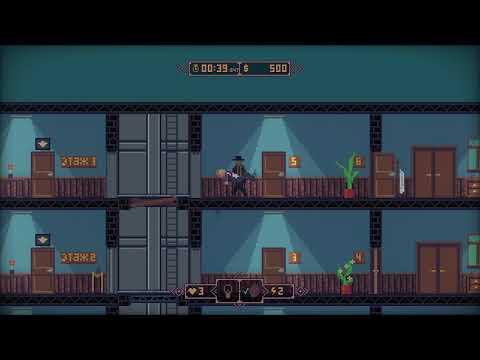 It's a relatively simple game when it comes to stealth but still quite good. The levels aren't overly challenging, it's mostly about getting your timing right on taking down guards and avoiding cameras, which can get a little easier when you complete a few missions and pick up some upgrades like allowing you to walk while pressed up against a wall to avoid things or make lock-picking a bit easier. Annoyingly, you need to manual save at the HQ, so if you finish a mission and quit it will be lost - it would have been better to save on quit but it's a small gripe against an otherwise nice little game.

Didn't blow me away but it's good enough to recommend for some casual stealth fun.

You can buy Moonshot on Steam.

We do often include affiliate links to earn us some pennies. We are currently affiliated with GOG and Humble Store. See more here.
About the author - Liam Dawe
I am the owner of GamingOnLinux. After discovering Linux back in the days of Mandrake in 2003, I constantly came back to check on the progress of Linux until Ubuntu appeared on the scene and it helped me to really love it. You can reach me easily by emailing GamingOnLinux directly.
See more from me
Some you may have missed, popular articles from the last month:
1 comment
Sslaxx 4 Aug, 2021
View PC info
Reminds me an awful lot of Trilby: Art of Theft.
0 Likes
While you're here, please consider supporting GamingOnLinux on: