Linux continues to remain above 1% on the Steam Hardware Survey

We don't usually comment directly on the Steam Hardware Survey every month, not unless it's something real interesting and this is the second month where it is because we're still officially above 1%! It was actually quite big news last month because it's the highest we've seen in many years.

The trend appears to be continuing, with the August numbers up from Valve which show Linux now at 1.02%. You can see a bit of history over on our dedicated Steam Tracker.

Using the latest months recorded share that's an estimated 1,228,080 "monthly active" Linux users on Steam, based on the last data Valve gave from January 2021. Going by the data that Steam provide we can see a breakdown of the most popular Linux distributions (when filtered to just Linux) on Steam right now as these:

You can also see that Steam Flatpak shows up being used by 5.58% of Linux/Steam users.

Want to see what systems our readers are running? Check out our statistics page.

We expect the hype around the Steam Deck and Proton getting some bigger mentions from Valve has helped. Since the Steam Deck is a Linux machine with SteamOS 3 being based on Arch Linux, it's not overly surprising to see a bump in people trying Linux out before the release.

We do often include affiliate links to earn us some pennies. We are currently affiliated with GOG and Humble Store. See more here.
About the author - Liam Dawe
I am the owner of GamingOnLinux. After discovering Linux back in the days of Mandrake in 2003, I constantly came back to check on the progress of Linux until Ubuntu appeared on the scene and it helped me to really love it. You can reach me easily by emailing GamingOnLinux directly.
See more from me
Some you may have missed, popular articles from the last month:
35 comments
Page: 1/4»

View PC info
You should use a Javascript library like Highcharts to have an interactive chart, it is cooler !
1 Likes, Who?

Quoting: FauconNoirYou should use a Javascript library like Highcharts to have an interactive chart, it is cooler !

We already do, on the dedicated page which is linked in the article but we're not going to stick JavaScript required stuff into an article content for something like that.
25 Likes, Who?

View PC info
and 0.001% Gentoo
Probably the only one who uses gentoo and plays games on it...

View PC info
Actually had the survey pop-up for the first time on my daughter's account last night. That's only the third time I recall getting asked across 4 accounts and 7 years.

The survey is such a mystery!
7 Likes, Who?

Quoting: thoughtfulhippoActually had the survey pop-up for the first time on my daughter's account last night. That's only the third time I recall getting asked across 4 accounts and 7 years.

The survey is such a mystery!

What is the adoption in the USA alone?

I know all good businessmen will actually focus more on chinese numbers before rest of the world because there is where big money is made today (well, unless Winnie is able to kill his country VG market with the new restrictions), but USA is meaningful for trend setting and it can give a hint on what to expect in the years to come.
0 Likes

Quoting: MalWhat is the adoption in the USA alone?

Nobody knows, but Liam's tracker has got the English only graph for a guess (nice increase lately!): 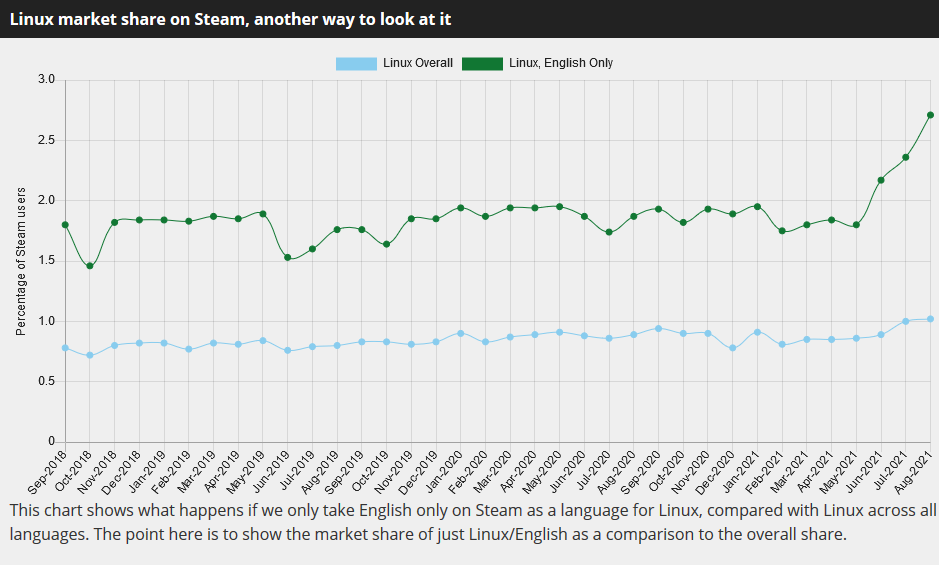 Liam, I'm still not sure how you're calculating it, despite reading the description. Which numbers do you use?

View PC info
Oh nice! That's awesome!
Considering 1% is well above 'trend', to be staying above that mark is really awesome!

And the number is highly likely to rise even higher once the Steam Deck starts shipping.
I really think 2% is within reach next year at this rate.
8 Likes, Who?

Quoting: EikeLiam, I'm still not sure how you're calculating it, despite reading the description. Which numbers do you use?

It's based on an older comment. I'm still not 100% sure if that's actually correct or not, maths is a real weak point of mine - the code is on GitLab if anyone wanted to verify and fix if it's wrong.