Plan ahead and heist away in Spirited Thief, with an open Alpha on Steam

Need something fresh this week? How about scouting out and planning for a heist? That's what you'll be doing in Spirited Thief and you can get in on the action early.

Planned to release on Steam in 2022, the developer has turned on their Steam Playtest, so anyone can request access to play through the current open Alpha version. The developer mentioned they've been developing some of it on Manjaro Linux too which is interesting to see. 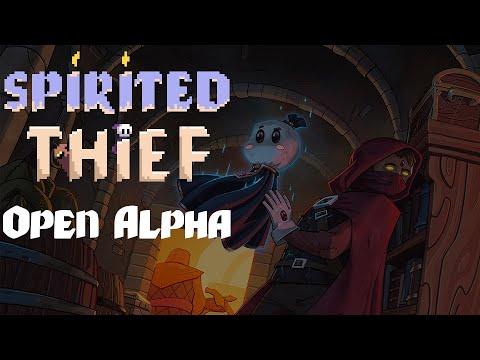 "Spirited Thief is a tactical stealth game with a quirk: take your time to scout and plan your heist, then break in to steal pricey gems under increasing pressure.

Play as Elaj, a thief and sorcerer who lost his powers in an accident, and Trin, a friendly but cheeky spirit of unknown origins. Infiltrate heavily protected vaults with the help of occasional allies to get your hands on treasures, secrets, and troubles."

View PC info
I like the look of this - reminds me of Invisible Inc, which I raved about in my PIN review (THREE YEARS ago?? WTH!!). I'll be wishlisting this for sure.
1 Likes, Who?

Quoting: scaineI like the look of this - reminds me of Invisible Inc, which I raved about in my PIN review (THREE YEARS ago?? WTH!!). I'll be wishlisting this for sure.

I was just thinking about Invisible, Inc. Hopefully it doesn't have that damned XCOM-style global timer nonsense, I hate that mechanic, and it kinda killed my desire to play when I finally got it for my tablet.
1 Likes, Who?

Quoting: NezchanI was just thinking about Invisible, Inc. Hopefully it doesn't have that damned XCOM-style global timer nonsense, I hate that mechanic, and it kinda killed my desire to play when I finally got it for my tablet.

Hey, developer of Spirited Thief here! ^_^
The game uses a system similar to the "Security Level" of Invisible Inc: the mission gets increasingly harder with each turn, but there's no hard time limit. This doesn't concern the scouting phase, which has no time pressure at all. I'm also making sure that you can fine-tune the difficulty to the desired level.
2 Likes, Who?
While you're here, please consider supporting GamingOnLinux on: