The 7 Day Roguelike Challenge was earlier this month with over 200 games submitted. I've spent the past week and half playing various games and I've also seen some streamed. That still means I've tried only a small number of games and Game Jams tend to lead to more experimental games.

Here is a selection of ten games I recommend from the game jam. 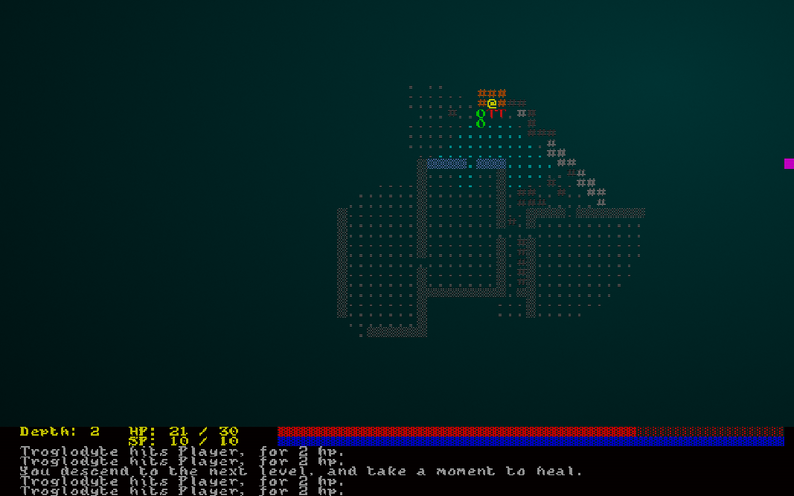 Svarogue experimented with your weapon being separate from you. You can telekinetically move it around. Adding two characters to move can make the game hard to play but I think the developer did a good job with it here. The developer of Mercury Salvage has entered for the past 14 years. As such he starts with an engine he understands very well and he posted about his development in the game jam forums. I knew it looked amazing and the gameplay is equal to the artwork.

You play as an employee salvaging ships. You need to find pieces of scrap, survivors, the black box and kill any creatures on board. You have an air hose of limited length and a gun. You can detach from the air hose for a limited time. It is a great experience.

This game looks more like a traditional roguelike. It is a beautiful game. The forest generation is amazing. You can only travel on the paths but can see between some of the tree so it doesn't feel like hard walls you find in most roguelikes. The path and trees are not one colour but different shades of brown and green.

You travel into a limestone chasm to try to find your father.

This game also has awesome art direction. You show up for your weekly game but this week the game master is running a one shot. You see the complete dungeon but not the content of the rooms. The style is designed to look like a map from a game master might make. The adventure log has the game master tells you if the monster hits and how much damage you take.

There are games that combine genres in the contest. Puzzle Crawl is not a match 3 game. You can match blocks less than three to my initial surprise. There are a variety of monsters on the board you can defeat. The blocks you activate before getting to the monster alter your stats temporarily or grant experience points. As you level up you can skills and you can find items in treasure chests. The game was made for the Pico-8 virtual console. 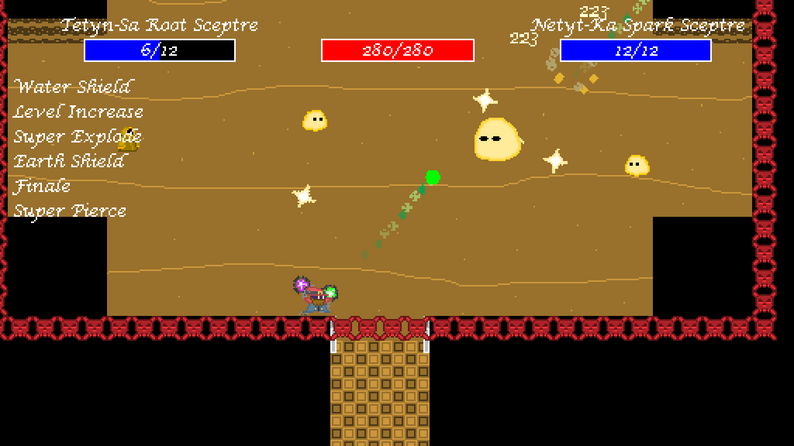 The Omega Rod drops turn based play for real time. It feels similar to Enter The Gungeon. Instead of a gun, you are a wizards with a single rod to start with. You gain more rods as you defeat monsters. You also gain abilities. Some abilities always affect you. Some abilities only work with rods in certain subgroups like wands.

Amulet Raider is another real time game. It combines Rogue with the gameplay of XQuest (Crystal Quest). I haven't played XQuest to my knowledge. The character gets momentum from the movement of the mouse. You do not stop automatically. You can fire in the direction you are travelling. There are potions which can grant invulnerability. You can look at a large map but the game does not pause. 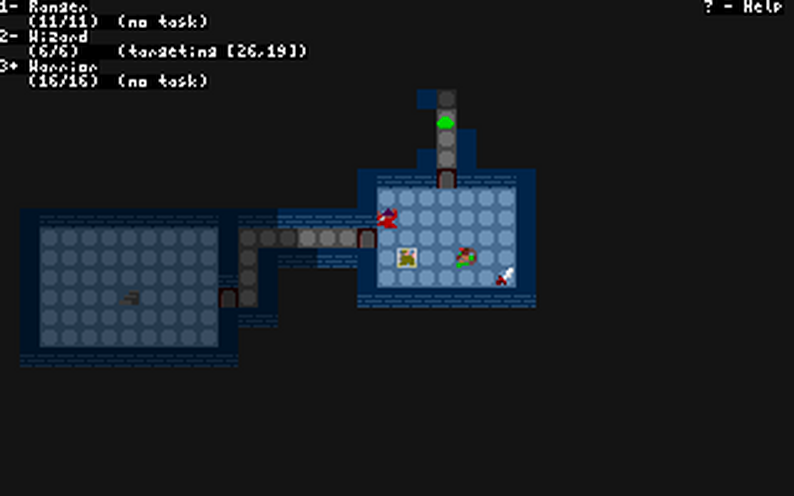 The developer lists this as an incomplete roguelike with a team of characters. This is not the only squad based entry in the game jam I played but despite being unfinished I liked this one the best. The other characters will automatically attack if not being controlled. They can't be told to follow which is my biggest complaint. The graphical version has nice artwork. The developer includes the source code but no license which is unfortunate. 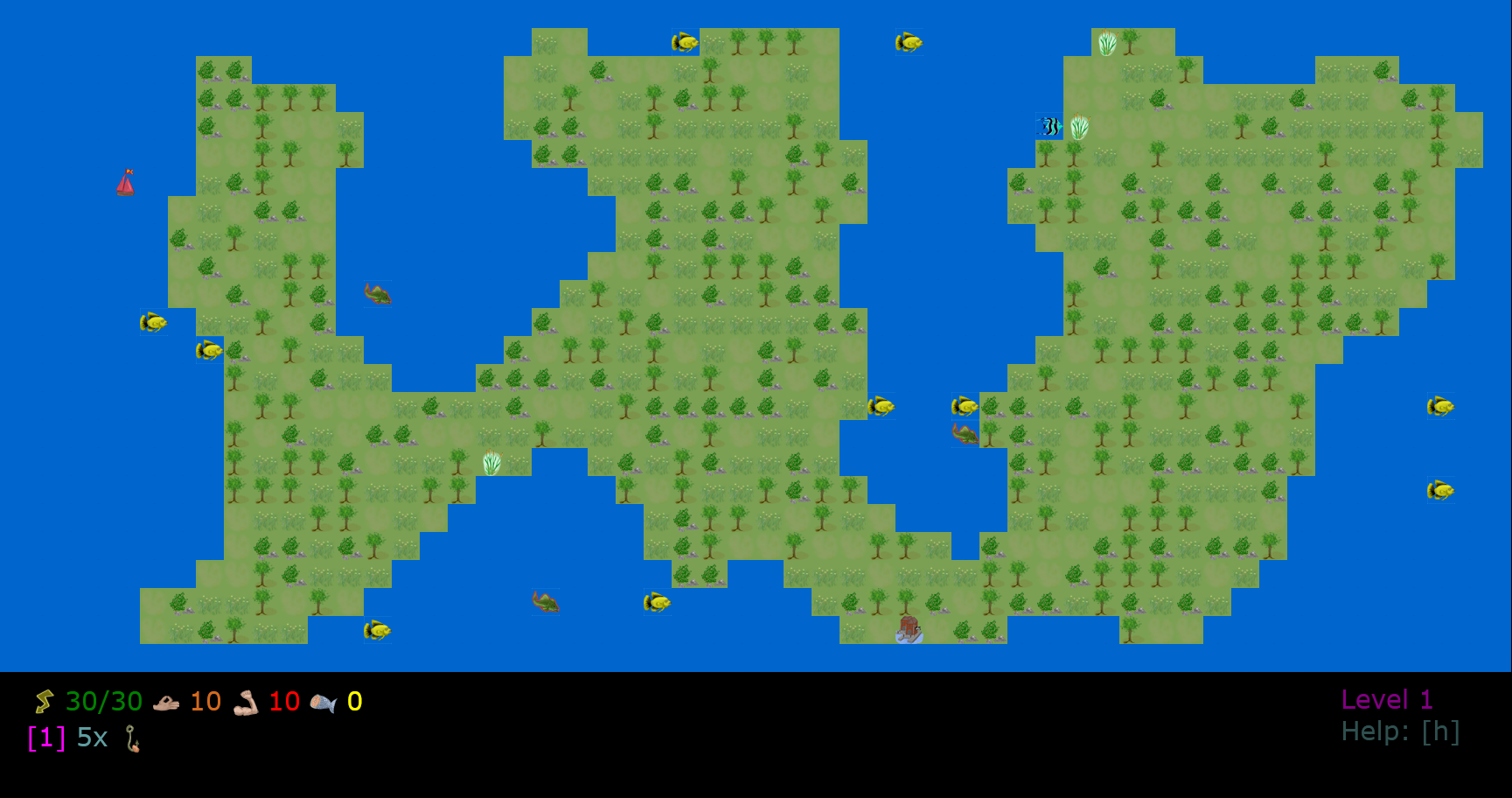 Don't feel like crawling around a dungeon. You can always go fishing. Your goal is to catch the jaguar shark but you need to advance in level before you can do that. It is a well polished game.

Some entries stretch the roguelike or roguelite genre more than others. This one is a real-time shoot em up written for the PICO-8. The graphics are well done. You can choose your ship and you get upgrades during your play-through.

The game jam and all submissions can be found on itch.io.

We do often include affiliate links to earn us some pennies. We are currently affiliated with GOG and Humble Store. See more here.
About the author - Dennis_Payne

I am an open source game developer. I write about games and try to restore ones that no longer work. As a Fedora packager, I try to improve the games available with the distribution.
See more from me
Some you may have missed, popular articles from the last month:
1 comment

View PC info
The Dungeon Team developer has released the code under the MIT license.

https://github.com/tdwsl/dungeon-team
0 Likes
While you're here, please consider supporting GamingOnLinux on: