Heroic Games Launcher, the community-made open source app for the Epic Games Store, is now available as a Flatpak on Flathub making it even easier to install and setup on Linux and Steam Deck.

Work that had been ongoing for a while, with multiple upgrades and tweaks needed to get there. Initially it had a problem finding Proton and Wine versions installed that I spoke with the developer of Heroic on today and now it's solved. Thanks to this, it makes getting both Epic Games and GOG onto the Steam Deck and Linux desktops just a few button clicks away.

Here's a short and to the point updated video guide for the Steam Deck including SD Card access: 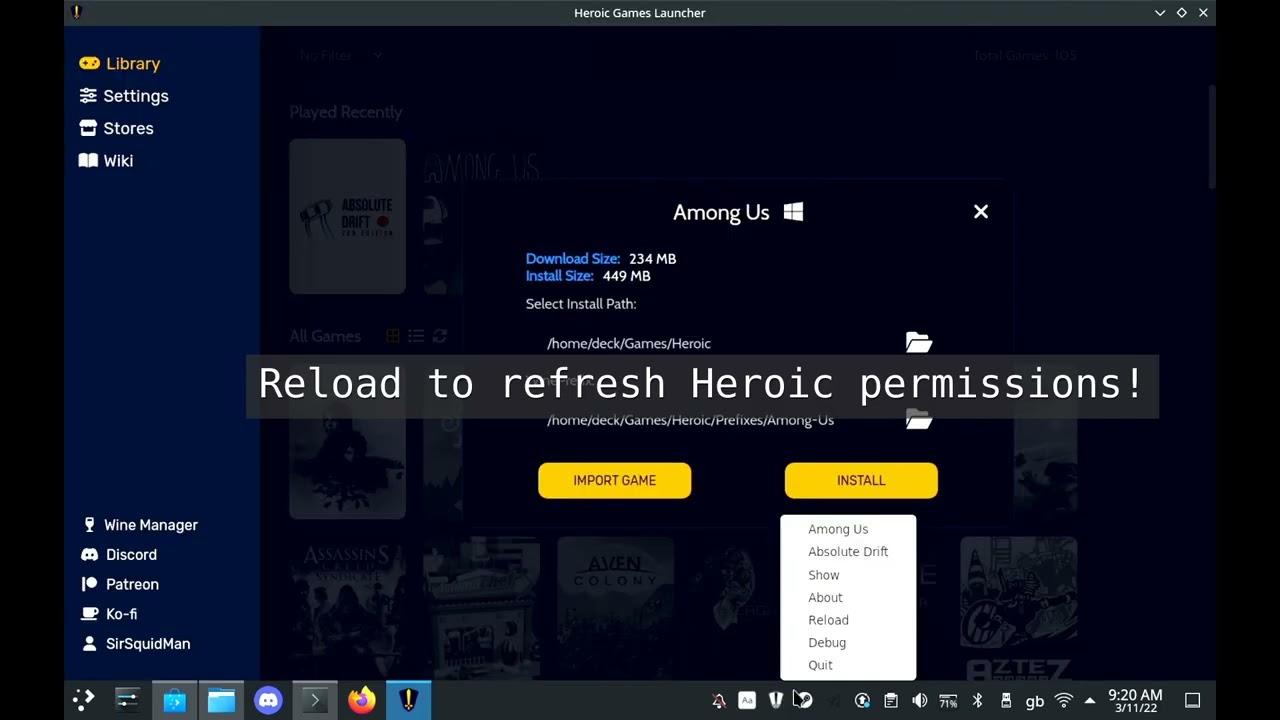 Either run this in terminal:

You can find the correct address using the Dolphin file manager, scrolling down to the Removable Devices and opening Primary. Near the top of the window where it lists the folder name, click next to it and the address will appear for you to copy. For example mine is "/run/media/mmcblk0p1/", which might be the same across most Decks.

Or you can install Flatseal, which allows you to adjust permissions of Flatpak packages. With that, you can load it and pick the Heroic Games Launcher, scroll down in the right panel to Filesystem and add a new entry in the box with no trailing slash.

When you've enabled SD Card access, make sure to reload the Heroic app so it picks up the new permission.

Enjoy all the free games Epic keeps throwing at you.

View PC info
Ha, I still do not want to support them (epic, not the devs of the game launcher) in anyway.
2 Likes, Who?
Mal 11 Mar

I guess this fixation with EGS is because the steam games works all flawlessly and there is nothing to make an article with?
0 Likes

View PC info
It might be easier now, but it's still quite a hassle, me thinks.
I did a quick try to run "Kingdom come deliverance", but it won't run without further hacking. Can't run it with Steam, because of EOS and with heroic and the wine prefix it just does not run. Guess I have to fiddle with it some more, which is tiresome without a bluetooth mouse+keyboard.
But still, nice to see Heroic as flatpack.
0 Likes

I guess this fixation with EGS is because the steam games works all flawlessly and there is nothing to make an article with?

Me too. But in the context of wanting Steam Deck to be appealing to the general audience and sell metric kilobuttloads of units, this is probably a Good Thing.

View PC info
I don't think you need the override to go directly to your SD card
I think you can make the override go to /run/media and that way any SD card naming will be covered
2 Likes, Who?
fearnflavio 12 Mar

Heroic also Supports GOG, including Native Games 👀
1 Likes, Who?
Chevek 12 Mar
Hi,
I've wrote a small shell script to help installing flatpaks in batch (steam, lutris, Heroic Games Launcher, Flatseal, emulators...) on most (if any?) distributions. So far it's working well ; it has a gui if available (gtk and qt). I wonder if it has any use on the deck. I do not have one.

Check my work here:
https://github.com/Chevek/Gaming-Flatpak
(use the releases if you want to try it)

Unfortunately it was made by and for french people so it has limited english support as of now, but I will improve it.

I use Lutris for this. Is it any better?

Thanks for this article (and the Youtube video) it was super helpful. Like many people I've just got a Steamdeck so this is my very first experience with Linux. I installed Prey off the Epic game store using Heroic and apart from the odd stutter it works like a charm. However I also installed MechWarrior Mercenaries which fails to load at all even though it listed as being Platinum on the compatibility list.

This is the error: 'The following components are required to run this program: Microsoft Visual C++ Runtime'. Like I said I'm completely new to Linux so don't know where to even start to fix this. If anyone can give me any pointers it would be much appreciated, thanks.
0 Likes
1/2»
While you're here, please consider supporting GamingOnLinux on: