SteamOS 3.3 and Steam Deck Client updates released for all users

All the latest Beta and Preview changes from Valve have gone live with SteamOS 3.3 and all the Steam Deck Client updates are now available for all users. This is one of the biggest updates yet, with tons of changes across all parts of the Steam Deck software.

Some of the big changes include:

The bug fixes are pretty important too of course like digital reward notifications no longer appearing endlessly, achievement progress notifications should no longer constantly bug you with sounds, the Xbox login window not rendering certain characters properly, several fixes for non-Steam shortcuts crashing, some native Linux games not quitting properly, some Flatpak applications wouldn’t quit properly, a fix for a performance issue with some games when the backlight changes intensity, fixes for multi-channel audio on external displays and audio-out on some capture cards. 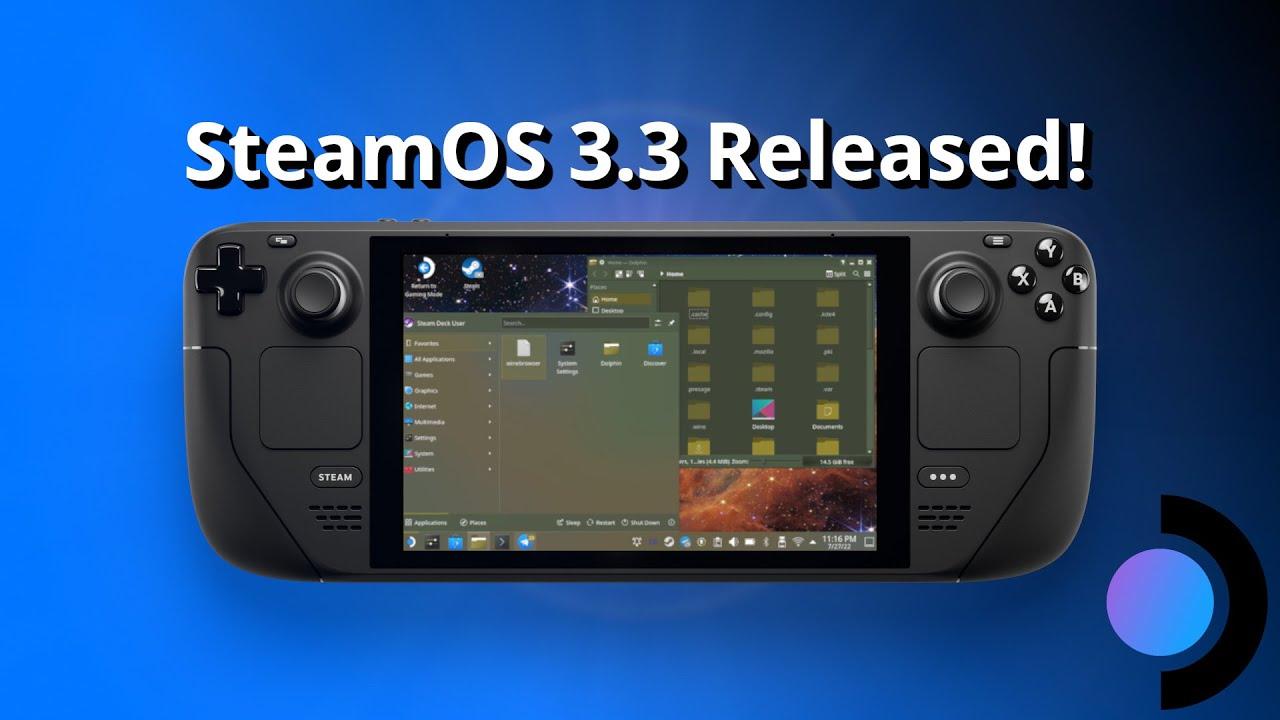 Extra: just note, that there may be some issues with the graphics driver in this, as I showed in a different video. Update: Valve confirmed to me they are looking at the issue now. Update 2: the micro-stuttering issue is now solved.

Some other articles you should take a look at:

We do often include affiliate links to earn us some pennies. We are currently affiliated with GOG and Humble Store. See more here.
About the author - Liam Dawe
I am the owner of GamingOnLinux. After discovering Linux back in the days of Mandrake in 2003, I constantly came back to check on the progress of Linux until Ubuntu appeared on the scene and it helped me to really love it. You can reach me easily by emailing GamingOnLinux directly.
See more from me
Some you may have missed, popular articles from the last month:
25 comments
Page: 1/3»

I would like to see an option to turn off screen when just downloading games and not playing to have better battery life.

jrepin 3 Aug
View PC info
Flatpak :( I would prefer it updated a bit slower (not never like up until now) and having a proper normal Arch package. Why does it even have to take so long, most of the job of packaging Firefox is done by Arch packagers anyways and Valve should not do much to bring the updated Arch package into base OS image. With Flatpak some plugins don't work (like Plasma Integration and KeepassXC) and it is slower and bloated, almost as bad as those Snaps Ubuntu is trying to force down our throats. And probably there are some more problems with Flatpak, like I remember hardware video acceleration not working with it.
2 Likes, Who?

View PC info
Think he could be disappointed by the results here, but maybe.. :)

“Now personally I'm convinced that the reason the Steam Deck dock has been delayed is not because of the dock itself but because of the fact that you'd need a controller to get the most out of docked mode. Maybe it's wishful thinking, but it seems like a new Steam Controller that retains the Steam Deck's control layout is pretty much a necessity for the dock and the future of the Steam OS/Steam Machine concept. To me a Steam Controller 2 feels more like a question of *when*, not *if*.

But there's really no other way to interpret this, right? Is this basically confirmation that a new Steam Controller is in development?”

Supay 3 Aug
View PC info
The Beta update broke my SD card showing up as inserted. Tried rebooting and re-inserting but would not even show as an available device. Switching to Stable resolved it.
0 Likes

Quoting: bonaparteNo link back to the actual announcement page on the Steam website? For shame.

Isn't that already linked in the first sentence under the link embedded in the words "gone live"?
1 Likes, Who?

View PC info
Hmm the update isn't being applied for me. The deck restarts, but after starting up it still shows the update.

Edit: nvm, it is applied (it shows achievements and guides). But it still shows the update.

Edit2: apparently the deck only applies the steam portion of the update, not the steamos part

Quoting: bonaparteNo link back to the actual announcement page on the Steam website? For shame.

Isn't that already linked in the first sentence under the link embedded in the words "gone live"?

Yes, the link is right there, always has been.
1 Likes, Who?

Now that this big update is out, I hope Valve will have another look at Remote Play, which is broken (well, not really broken, but unacceptable performance-wise) for many of us. There are many open issues tracked on github.
0 Likes

Quoting: SupayThe Beta update broke my SD card showing up as inserted. Tried rebooting and re-inserting but would not even show as an available device. Switching to Stable resolved it.

Checked again by switching back to Beta and my SD card is not recognised. Stable works fine though.
0 Likes

Quoting: SupayThe Beta update broke my SD card showing up as inserted. Tried rebooting and re-inserting but would not even show as an available device. Switching to Stable resolved it.

Checked again by switching back to Beta and my SD card is not recognised. Stable works fine though.

And now Stable shows another update and my SD card no longer shows in Stable and is no longer mountable on my desktop. Has worked fine right up to this update installation. I suggest removing it before updating.

Update: My SD card appears to have had its read only setting tripped and is now unmountable and unreadable, and cannot be returned to a usable state. It is an Integral 1TB micro SD and has been formatted and filled to capacity to test, and working fine, so I am certain it is a genuine device rather than a fake. And it only stopped working when I did my Deck update with it inserted, so be very careful and remove your SDs before running any update.