[I] Doesn’t Exist is an up-and coming text-based game by LUAL Games that will combine old-school adventuring with modern design, most notably a narrative AI that promises to smooth out the player experience. We caught up with the developers at Gamescom 2022 in Cologne, Germany to see how this ambitious project is progressing.

LUAL Games is made up of two recent graduates who studied game design, Luzia Hüttenmoser and Anna-Lena Pontet, both from Zürich, Switzerland. [I] Doesn’t Exist started as a bachelor’s project that quickly took on a life of its own, especially one it was picked up by ProHelvetia, a Swiss arts council.

Further funding was secured by setting up a Kickstarter campaign and launching a demo for the game via Steam and itch.io. However, the team’s modest goal of 10,000 Swiss francs (roughly £9,000) was overshot by a massive margin and a total of nearly CHF25,000 (about £21,000) was raised.

“It’s amazing,” says Luzia, the game’s artist, “you never know what to expect when starting out.” Both developers emphasize that everything about their new-found situation is a first: it’s their first game, their first Kickstarter, even their first time engaging with the media. To have their demo be as successful as it is was a huge relief after what Luzia calls a “stressful and nerve-wracking” experience.

There’s little doubt in either Luzia or Anna-Lena’s mind that it’s the demo that propelled the [I] Doesn’t Exist Kickstarter campaign to its dizzying success, and playing it you’re tempted to agree. Tasked with the mission to open a mysterious door set in a tree, the player makes their way through a forest, collecting items and solving puzzles. 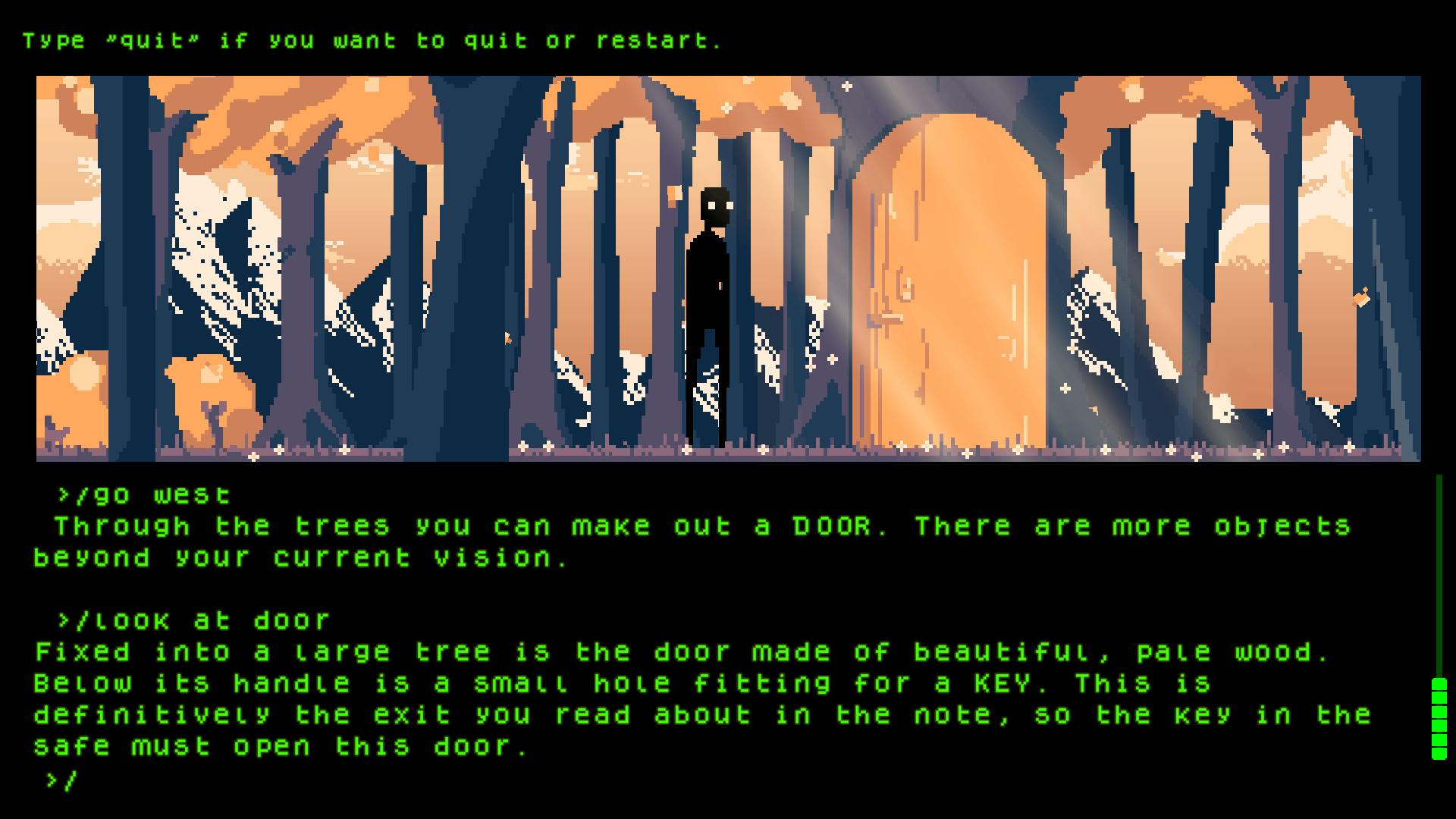 The demo -- which will also be the game’s first act out of three -- is a relatively straightforward affair: there’s a clear linear progression from your starting point to the end, about half an hour later. As simple as it is, though, you can already feel the work the artificial intelligence is doing, there’s none of the clunky interaction like in the text adventures of yesteryear.

For example, to open up a radio with a screwdriver, you just need to type “open radio” and the AI will figure out that you meant to do so with the screwdriver you have in your inventory. You don’t have to remove each screw one by one like in older games, or tape up cats like Gabriel Knight did.

The demo ends after about thirty minutes of gameplay with a great hook, one that both twists what the player thought they were doing as well as teasing greater adventures once the full game comes out. It needs to be played to be believed, but you’ll probably walk away wanting to pledge a few bob to Kickstarter yourself once you experience it.

The game is set to come out some time in mid 2023, and meanwhile the team is hard at work getting it finished. The demo that was shown at Gamescom has a few improvements already over the downloadable version, such as some added visual effects, like seeing leaves fall in a slow breeze in the forest.

Another update affects gameplay more drastically, adding text effects that convey the player character’s state of mind and could very well affect your own. If the player character is anxious or angry, for example, the text will become bigger and also take on different colors. It’s a simple, but effective addition. Other planned features include better animations for the player character, as well as a bigger role for the mushroom you met in the demo. 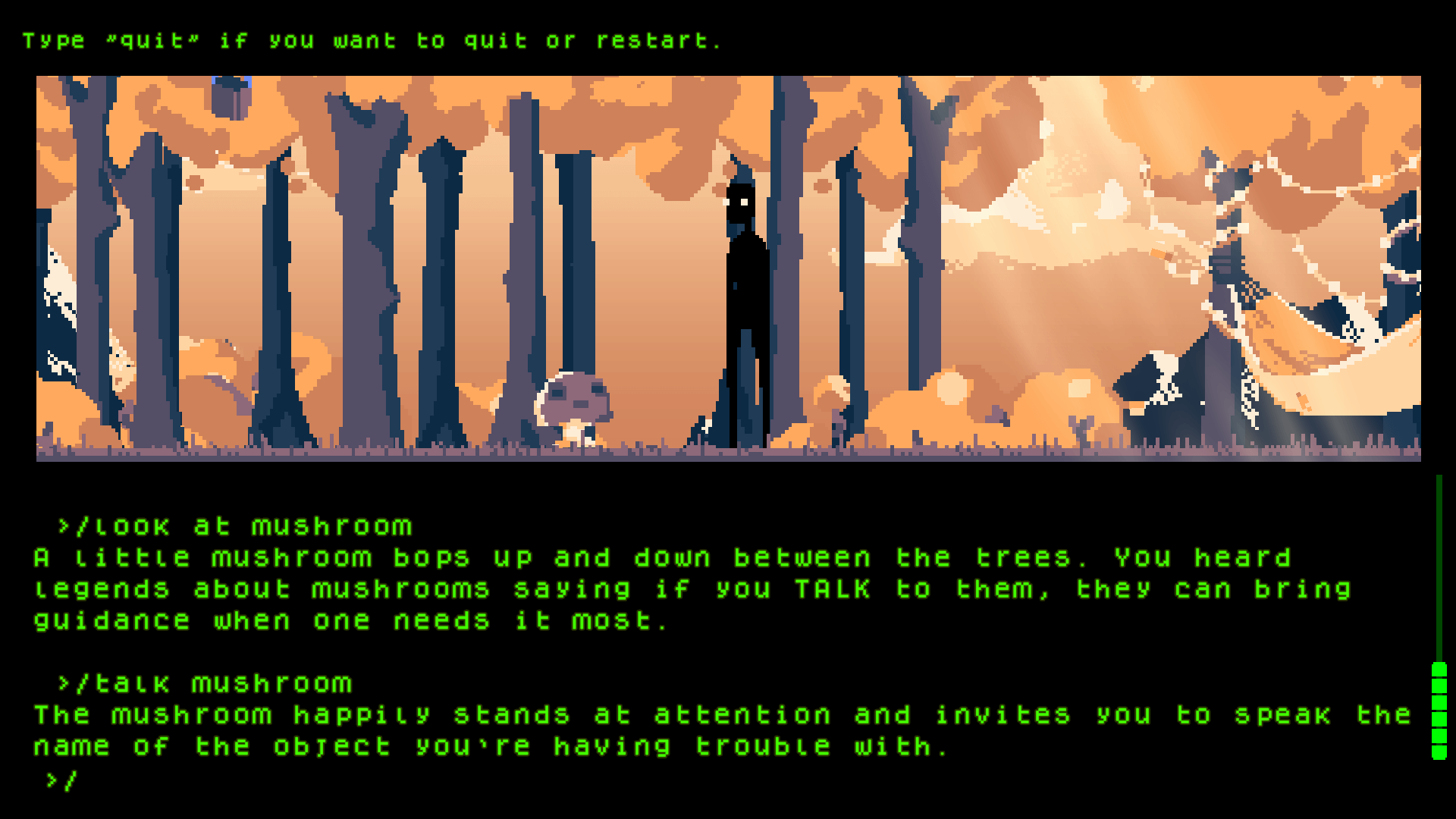 Anna-Lena, the game’s coder, is also planning to further improve the AI. “It makes for a much smoother experience for the player,” she says, “but also means a lot less work for us.” Though the AI in [I] Doesn’t Exist is still entirely reactive -- it only responds to player input, it can’t work out anything on its own -- by further refining it Anna-Lena should be able to avoid manually entering different options for commands, for example. “Using the AI makes it a lot easier to add things on the fly.”

If [I] Doesn’t Exist will prove a success on launch, Anna-Lena hopes that both LUAL Games and other studios will be able to use narrative AI to make better games across the spectrum, or even create tools that will help creators of all stripes make their dreams come alive. For now, though, they’re putting their noses to the grindstone and getting their current project done. We’re looking forward to seeing the finished product.

We do often include affiliate links to earn us some pennies. We are currently affiliated with GOG and Humble Store. See more here.
About the author - FergusOSullivan

Fergus is a writer and journalist who mainly writes about cybersecurity, but likes to dip his toes into Linux gaming as well. He's been a member of Team Penguin for about a decade now, and won't abandon Tux any time soon. To check out his other work, visit his site at fosullivan.com.
See more from me
Some you may have missed, popular articles from the last month:
2 comments

const 3 Sep
View PC info
I gave it a try. Couldn't really feel any difference to the text adventures of old times. Sure, keywords were a little more wild, like I could use shortened versions of these - but else? There were quite a few situations where I thought I might get additional info about the situation by asking different ways - no chance, always the same answer. Like in the starting position after the first puzzle, the AI insists there is only a Safe there, yet the graphical part shows 3 distinct objects. The note I read earlier, the safe and something that looks like a bar or a handle. I also couldn't make it cut out a piece of the chain to take with me or put out the fire with water.
Granted, I haven't played a text adventure for a good time, but other then the relaxed use of keywords, I couldn't find a difference, so I lost interest quickly. On the other sides, the clear vocabulary of of older adventures certainly helped staying focused. I fear this will be missing here.

Farmboy0 10 Sep
View PC info
It would have been great to have it mentioned that the game requires an internet connection to play. Some people might want to know this before buying.
0 Likes
While you're here, please consider supporting GamingOnLinux on: