THQ Nordic has acquired the Carmageddon IP, perhaps we will finally get it on Linux

THQ Nordic have announced that they've swallowed up another IP, this time it's Carmageddon from Stainless Games. It's interesting, since we were supposed to get Carmageddon: Reincarnation on Linux. 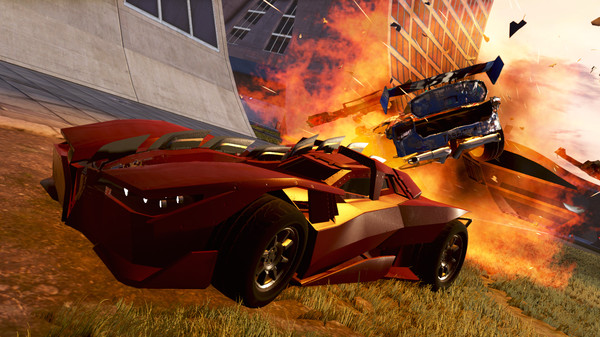 Stainless originally made a Kickstarter back in 2012, which had a promise of Linux support as a platform. Years later, they revamped the game into Carmageddon: Max Damage and we're still here six years later without Linux support for the game. Part of the problem, is that Linux support was a "stretch goal" at $600K (see here) and they did get funding of over $625K.

“Carmageddon finally crashed its way into our portfolio. Some pedestrians and a couple of members of the Bovinae subfamily might have (virtually) been killed in the process” added Jan Binsmaier, Publishing Director at THQ Nordic. “With over twenty years of franchise history, and yes, I feel a little older just saying this, and such a passionate and dedicated fan-base worldwide, we are confident we hit the right target.”

THQ Nordic have actually put out a few Linux games, so there's at least some hope there. They did the revamps of Sphinx and the Cursed Mummy, Silver, Imperium Galactica II and others which gained Linux support in the process. They also publish a few other games from smaller developers that also have Linux support. So they're at least a friendly name to have around.

Original announcement can be found here. Also on the Stainless Games site.

View PC info
Sounds good! THQ Nordic are one of the Linux supporting publishers.
4 Likes, Who?

I'm just running the full gamut of emotions right now. I've never been pissed off at a developer team before as much as I have Stainless and their troll employees.
4 Likes, Who?

View PC info
I backed this on kickstarter back then because of that promise.
Fool me once, shame on you. Fool me twice, shame on me. They won't see my money, THQ Nordic or not.

View PC info
Would be great if you can get a word with THQ, Liam, to confirm their feelings about a Linux port. This disgrace has been sitting in my Steam library unplayed for so long.
4 Likes, Who?
Whitewolfe80 3 Dec, 2018

Quoting: ShmerlSounds good! THQ Nordic are one of the Linux supporting publishers.

Mmm am holding off on that yet they bought deep silver still no mention of Darksiders 3 or Metro exodus coming to linux.
1 Likes, Who?

View PC info
I wound't say they support linux. They just seam to don't care if the devs port it or not, looking their steam page its majority is windows only games.
0 Likes
svartalf 3 Dec, 2018

Quoting: mirvWell Duke Nukem Forever was actually released. So anything is possible really.

It wasn't released...it ESCAPED...that's the only explanation for how atrocious the damn thing was... X-D
2 Likes, Who?

Quoting: toorI backed this on kickstarter back then because of that promise.
Fool me once, shame on you. Fool me twice, shame on me. They won't see my money, THQ Nordic or not.

They wouldn't see your money, even if you did buy it this time around. THQ Nordic would.

THQ Nordic just bought the IP, not the studios. The studio that made the game won't see a dime from this purchase.

So really, you're boycotting THQ Nordic - which had nothing to do with the kickstarter project you backed.
4 Likes, Who?
svartalf 3 Dec, 2018

I'm just running the full gamut of emotions right now. I've never been pissed off at a developer team before as much as I have Stainless and their troll employees.

Any of our community that went presuming that since they offered as a stretch goal that we'd get it eventually and acted accordingly got PRECISELY what they had coming from Stainless, unfortunately.
0 Likes
1/3»
While you're here, please consider supporting GamingOnLinux on: