Valve have put out their second beta update to the Steam client this year and this is actually a rather nice one.

Firstly, the big annoyance of Steam Play titles always having a zero-byte download when you first load the Steam client has been solved. It will still do it once but when you update them again now, it won't happen again (confirmed that myself). While in reality it was a really minor issue, it was damn annoying so it's great to see it fixed.

On top of that, Steam now supports ipv6 for "connections to download servers", DPI and screen size changes bugs were fixed, a new force quit option in the normal Steam Overlay if a game is frozen but the overlay still works that will be handy.

Then we get to the other Linux issues that were fixed, this time there's a pretty healthy dose on the menu:

yay, hopefully it fixes Sonic Mania network error on SteamOS, the kids have been waiting to play that one.
0 Likes

Awesome, I hope it fixed the issue with PES 2019 always blocking me to play online matches.
0 Likes

You should try to use AppIndicator/KStatusNotifierItem. 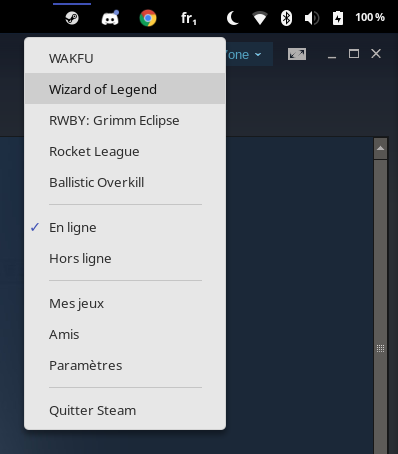 View PC info
Yes! While the zero byte updates were confusing and somewhat annoying, these two problems are much more important!:
-Fixed settings dialog incorrectly always prompting for a client restart (so annoying!)
-Fixed an issue with host libssl on newer distributions breaking some titles (I think this might fix some Worms games)

View PC info
-Mouse scrolling was the biggest issue for me. Its now way better but could still use some work, its a bit jumpy when scrolling. Not a big deal anymore though

-Dialog for restart was annoying. Happened mostly when i limited the download speed from the client.

-0 bytes thingy was annoying also as i have my PC on 24/7 and sometimes the download list went crazy, so many games that it was hard to see which games actually got update

-IPV6 is nice to have also


Rest i don't really care or never seen issues. But good to see some fixes

Maybe switching to KDE isn't an acceptable solution for everyone.

I realized that I hardly ever click that icon. Do you guys use it for some specific function?
0 Likes

Quoting: GuestSo many changes, nice :-) Didn't expect that IPv6 support is new though!

When I was in university, they told us that IPv4 is running short of addresses and the new IPv6 will fix that.
This was over 20 years ago.
6 Likes, Who?

Quoting: EikeWhen I was in university, they told us that IPv4 is running short of addresses and the new IPv6 will fix that.
This was over 20 years ago.

NAT on the client side, SNI on the server side - and suddenly the "shortage" isn't so important.
0 Likes
1/3»
While you're here, please consider supporting GamingOnLinux on: