AMD detail future plans for socket AM4 and Zen 3 compatibility, no Zen 3 for older chipsets

Update 19/05: AMD later clarified some new plans but they come with plenty of caveats.

If you're keeping an eye on the latest AMD processors coming, you might want to sit down and take a look at a recent post from AMD detailing their support plans for socket AM4 and Zen 3 compatibility.

Writing in a post on their community forum, AMD developer Robert Hallock announced their plans. Going over a little history, how in 2016 they said they would support socket AM4 until 2020 and since then processors have expanded a lot across the Excavator / Zen / Zen+ and Zen 2 architectures.

Starting off with the big question answered: the upcoming Zen 3 will be compatible with the X570 (2019) and B550 (2020) motherboards through a BIOS update. While they also mentioned "no plans" to have Zen 3 support older chipsets so if you were waiting on it you're likely going to need to spend more.

They've also provided a picture of their support status and plan: 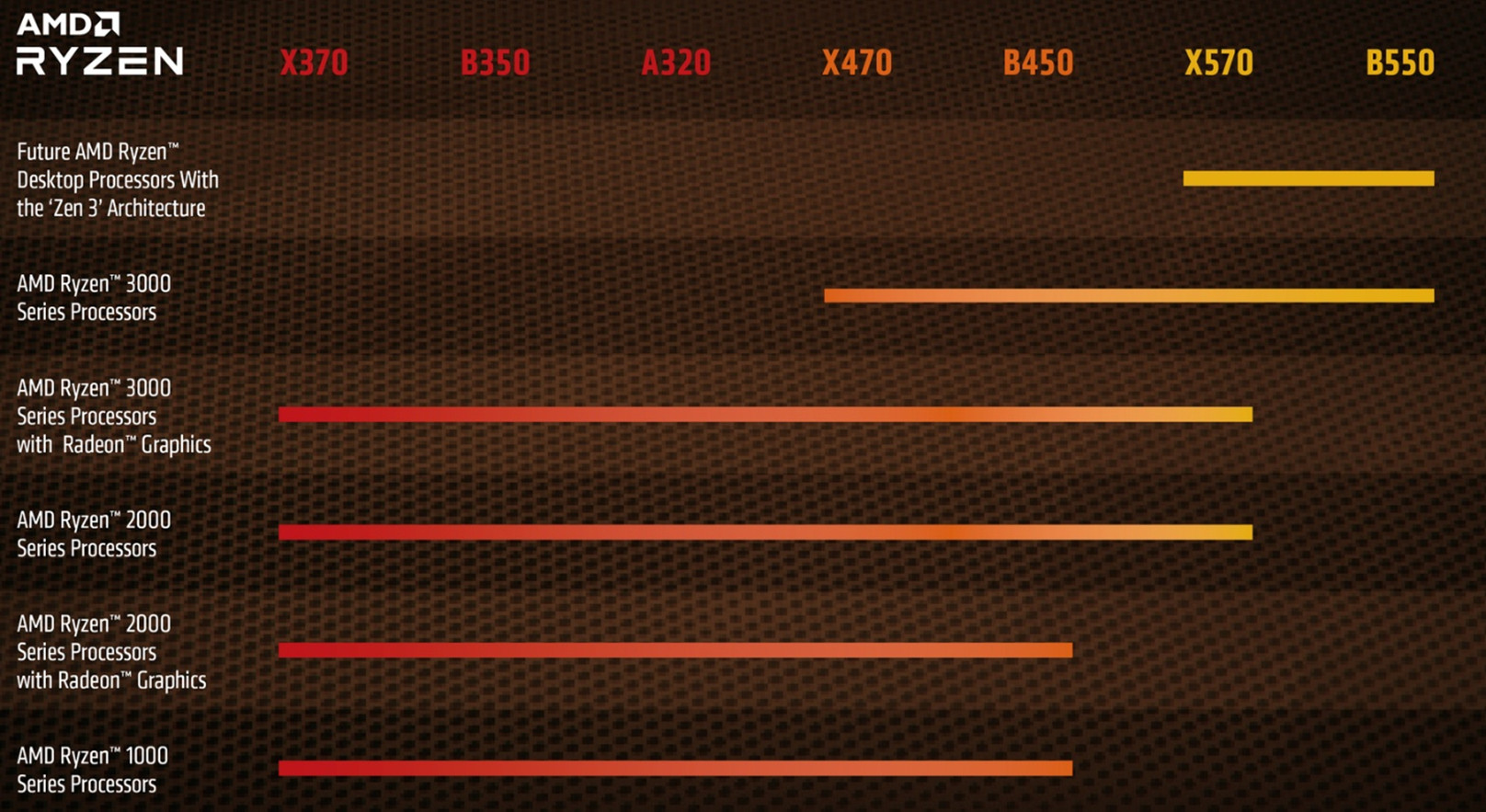 For the full details, see here.

Curious about their upcoming Zen 3? AMD stated recently that it and their next-generation GPU architecture with RDNA 2 are on target for this year.

About the author - Liam Dawe
I am the owner of GamingOnLinux. After discovering Linux back in the days of Mandrake in 2003, I constantly came back to check on the progress of Linux until Ubuntu appeared on the scene and it helped me to really love it. You can reach me easily by emailing GamingOnLinux directly and find me on Mastodon.
See more from me
Some you may have missed, popular articles from the last month:
The comments on this article are closed.
25 comments
Page: 1/3»

Anyway, I tend to keep my builds complete (motherboard/RAM/CPU) and use them as secondary computers, instead of swapping only my CPU... Having a sleeping CPU in a cupboard makes me itch. :)

View PC info
I don't get their happiness from the fact that the socket AM4 survived 4 years (2016-2020). AM3 socket debuted in 2009 and was partially compatible with AM2 released in 2006! It makes 10 years of support of the general socket design. Of course, not every motherboard supported all processors, but the same is true with AM4.

Moreover there is no gain from the fact that motherboard from 2016 and current one both use the same socket if they support different processor. I can't take 4 year old mobo and put a new Ryzen there. So, why I should be happy that the socket didn't change? Similarly, latest generation chipset won't work with Zen 1 architecture CPUs.
0 Likes

[email protected] 7 May, 2020
View PC info
Fine by me. I see no reason to support more than 2 generations of CPUs on the same motherboard. Look at how troublesome Ryzen 3000 support was at launch, with a scramble to update BIOSes on old boards that ended loosing support for older processors.

I want to buy a motherboard without too much research to know if what I'm buying have the necessary update for the CPU I chose.

View PC info
You are only reconfirming my point - they have nothing special to brag about :)
0 Likes

I have an ASUS Prime B350-Plus which states Ryzen 3000 support. I was planning to upgrade so the image here worries me. I will need to do more research.

View PC info
I guess it ultimately depends on the OEM decision, I have a B350 and it does support Ryzen 3000 series. (and also PCIE 4)

Anyway probably all the b350/370 are a dead end, because I think no OEM does bios updates after three years, maybe some 470 have better luck.

View PC info
Yeah so a lot of the discussions regarding the lack of support is due to the UEFI/BIOS capacity as opposed to AMD not making CPU's compatible with older boards. For example, my Asrock X370 Gaming K4 is capable of supporting Ryzen 3 series (e.g. Ryzen 7 3700x), but by updating my UEFI for support for it, it removes support for anything below the 3 series as there is not enough ROM space.
1 Likes, Who?
Nagezahn 8 May, 2020

It's always a nice thing when new things and old things get along well, but in this specific case for me it doesn't make a difference - there's usually too much time passing between upgrades. Still running an Athlon X4 860K here. And while I'm thinking about upgrading ever since Ryzen released, there's always a new version of them coming up on the "horyzen" that I fell there's never the point where I "have to" upgrade. After all, my machine is still working for the things I feed it.
1 Likes, Who?
1/3»
While you're here, please consider supporting GamingOnLinux on: