Valve have updated Dota 2 with a major new release featuring not only a brand new Battle Pass and a big new event, they also added in AMD FidelityFX Super Resolution.

The new Battle Pass is available at a minimum $7.49 / £5.49 spend, although you don't need it to access the Nemestice Event Game as it's available to everyone. In this new game mode every three minutes a Nemestice Storm will cause a giant meteorite strike in the centre of the map. You need to channel them to collect Nemestice Embers while also dodging them so they don't hit you. These Embers will power you up boosting attack damage, spells and movement speed and if you have enough you shock nearby enemies. It puts a little twist on towers too, with each falling giving the remaining a power boost - destroy all enemy towers to claim the area and win. 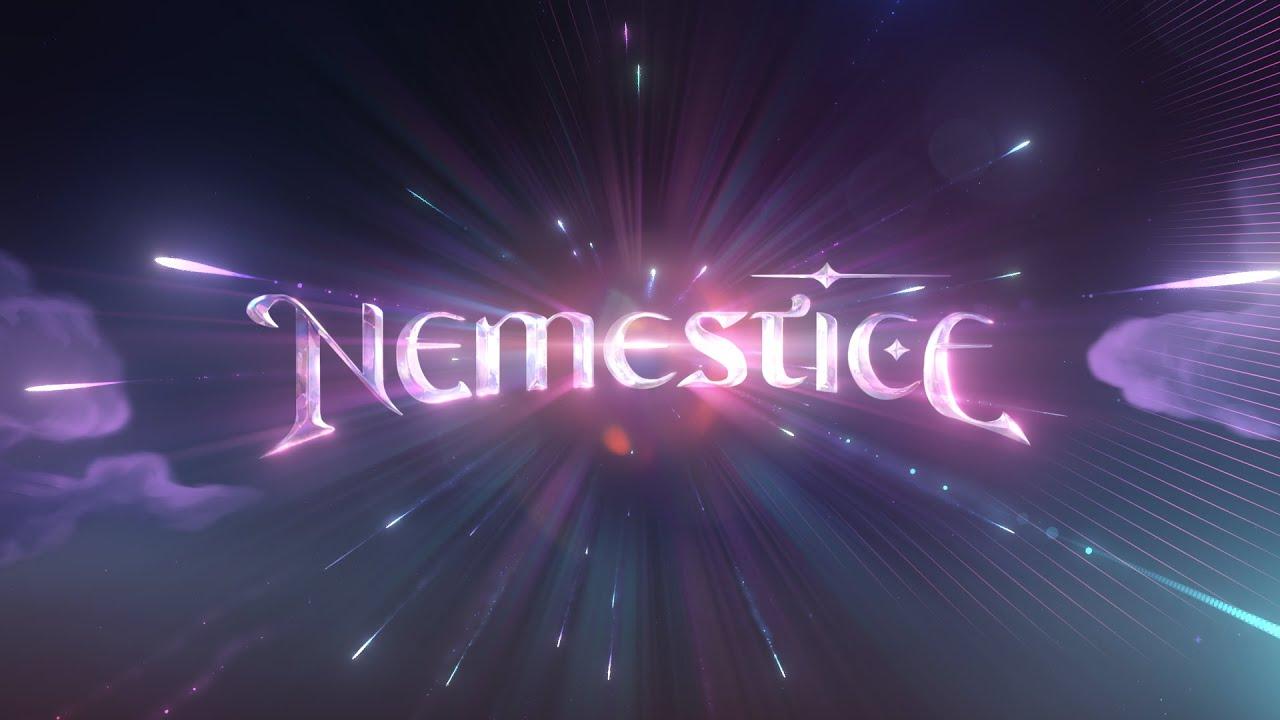 As for the Battle Pass, you likely know the drill by now. There's quests to complete to gain Battle Points, new assistant features, unlock new rewards as you level up the Battle Pass. Level up high enough and there's some real special cosmetics included like the outfit from the Anime series Dota: Dragon's Blood, along with Spectre Arcana, ranged attack effects, new creep styles and much more.

Surprisingly, AMD FidelityFX Super Resolution does work on Linux too which we've now been able to confirm with this natively supported title (and absolutely on NVIDIA GPUs too). There's also scattered reports of it working just fine in some Windows games played in Steam Play Proton but this gives another game to test with. As long as you have Dota 2 set to Vulkan and bring down the "Game Screen Render Quality" to less than 100% you're able to tick the box to turn it on.

How does it look? Well, compare these two images (off left / right on - click for bigger): 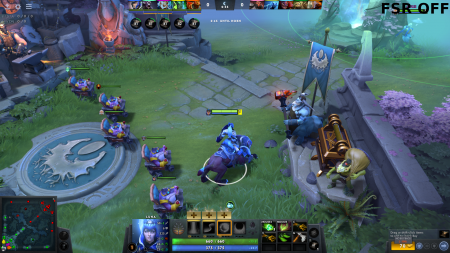 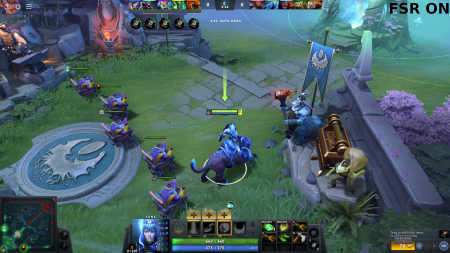 If you zoom in, you can clearly tell the image with AMD FidelityFX Super Resolution is looking a lot sharper.

Zappor 24 Jun, 2021
View PC info
The AMD Windows driver 21.6.1 says it has "AMD FidelityFX Super Resolution (FSR) support for select titles" but this is just marketing.
FSR has nothing to do with the driver, AMD confirmed this. So yeah it's just a pixel compute step the game does, and should work everywhere...
0 Likes

View PC info
That awkward moment when the upscaled result looks better than the native... sharpening is amazing. :D
1 Likes, Who?

Quoting: ZapporThe AMD Windows driver 21.6.1 says it has "AMD FidelityFX Super Resolution (FSR) support for select titles" but this is just marketing.
FSR has nothing to do with the driver, AMD confirmed this. So yeah it's just a pixel compute step the game does, and should work everywhere...

I wouldn't be so sure, the pixel compute step is still running on GPU, so driver optimizations for specific GPUs HW capabilities might be possible. While it clearly also runs on Nvidia, it is running slightly slower (for now?).
1 Likes, Who?

fagnerln 24 Jun, 2021
View PC info
A fun fact is that AMD is "winning" with the openess of their projects, freesync for example. I hope that amd continues with this ideology even with the market share growing.

I read some early reviews and it's only good things about, free performance for everyone.
5 Likes, Who?

I don't agree here. It just looks like your average sharpening filter and I don't think it looks better.
3 Likes, Who?

View PC info
Looking better than native resolution was never the goal for FSR, at least not in the initial stages. It shouldn't be that much sharper as seen in these screenshots... hmm. I wonder if something else is going on here, like CAS which specifically is sharpening while FSR may produce a slight sharpening effect from the edge detection algorithm.

Could it be that Liam mixed up the screenshots?

Quoting: dpanterLooking better than native resolution was never the goal for FSR, at least not in the initial stages. It shouldn't be that much sharper as seen in these screenshots... hmm. I wonder if something else is going on here, like CAS which specifically is sharpening while FSR may produce a slight sharpening effect from the edge detection algorithm.

Could it be that Liam mixed up the screenshots?

View PC info
Well I could replicate it on my setup so it's definitely correct, enabling FSR in Dota2 has a sharpening effect.
Screenshots are 3440x1440 everything maxed. (ignore MangoHud claiming it's using OpenGL, it's a bug with 0.6.4) :)

OFF at native vs ON at 99% resolution scale

So why is the FPS unchanged between screenshots? You tell me. Is this really FSR or just sneaky CAS? It's a 6900XT after all so maybe it's too fast to make a difference. Hmm intensifies...
0 Likes

Quoting: dpanterCould it be that Liam mixed up the screenshots?

Quoting: SolitaryMy guess is that the native resolution example just doesn't have any sharpening applied at all, which might be Liam's mistake or maybe the game doesn't have any sharpening options (I never really played Dota, so I am not sure), but if I am not mistaken you should disable any sharpening options before enabling FSR (because it would interfere), so if the native resolution is missing that effect (by mistake or that's just how it is) then you might get this unbalanced comparison.

There is no mistake. FSR sharpens the textures in Dota 2.
0 Likes