Linux and audio have never entirely gotten along well together, when PulseAudio came along it actually solved a lot of problems but it's PipeWire that's the real future.

Truthfully, I was hesitent to switch my own PC over from PulseAudio to PipeWire for fear of breakage, especially with the Steam Deck — I needed things to continue working smoothly. However, I also sometimes tend to just "YOLO" for the fun of it and so I did. I'm now running PipeWire and I have to tell you how happy I am with it.

PipeWire is a project that aims to greatly improve handling of audio and video under Linux. It provides a low-latency, graph based processing engine on top of audio and video devices that can be used to support the use cases currently handled by both pulseaudio and JACK. PipeWire was designed with a powerful security model that makes interacting with audio and video devices from containerized applications easy, with supporting Flatpak applications being the primary goal. Alongside Wayland and Flatpak we expect PipeWire to provide a core building block for the future of Linux application development.

Not only is it powerful, it's also surprisingly easy to use and assorted applications have sprung up around it to support it. Software like Helvum and qpwgraph have absolutely blown my mind on how ridiculously simple they make messing with audio inputs and outputs.

Something I've wanted to do for a long time, but Pulse didn't really help and I didn't like the complexity of JACK was to get different inputs and outputs going for OBS Studio for my livestreams. Things like only having very specific audio go to certain places. Now, it's ridiculously easy.

With the aforementioned applications, you just drag wires between things and…done. That's it. How is Linux audio now this easy?! 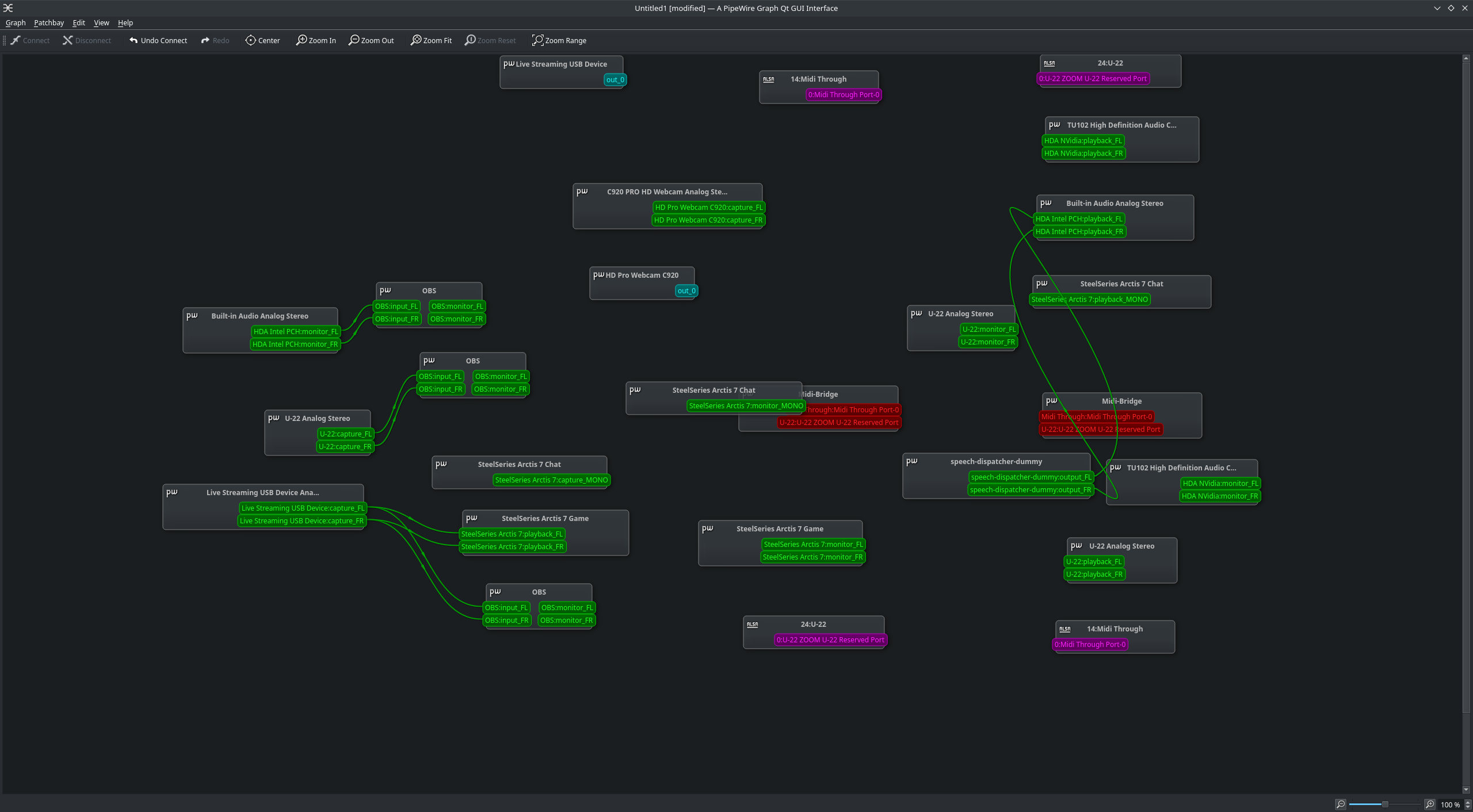 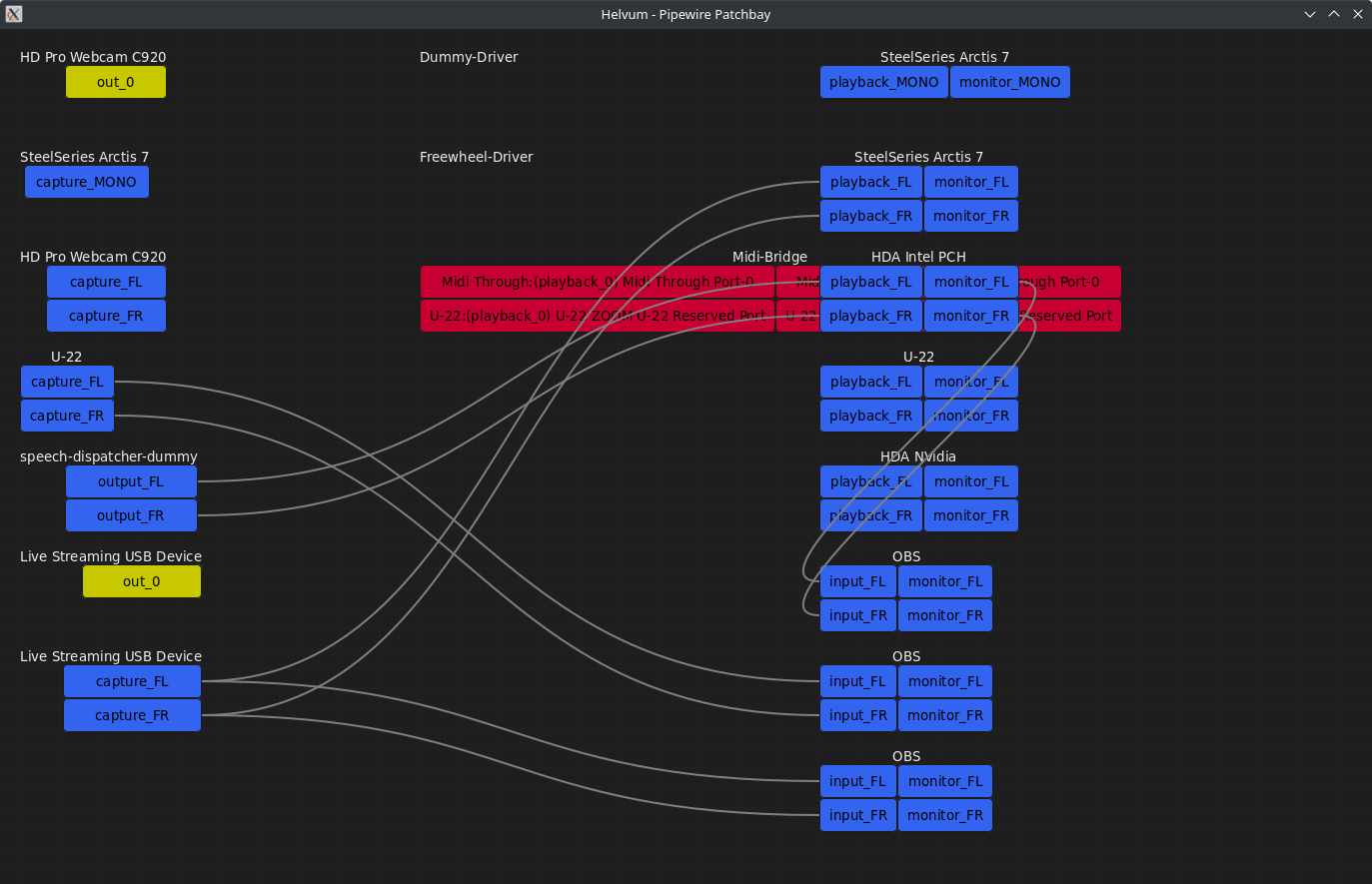 For example, grabbing the audio from my shiny Capture Card that's attached between the Steam Deck and my PC, with a drag of a wire I can now have it going to OBS Studio and also have it so only that goes to my Wireless headset. How about music playing that only I can hear? It's a small thing but PipeWire makes everything like that simple. Duplicating and moving audio streams with the drag of a wire. I like simplicity, it makes me happy. There's a huge amount this enables without diving into confusing configuration files, and there's no terminal needed - it's all in the UI. Lovely.

Linux audio is really going places with this. If you also haven't tried PipeWire yet, you're missing out.

We do often include affiliate links to earn us some pennies. We are currently affiliated with GOG and Humble Store. See more here.
About the author - Liam Dawe
I am the owner of GamingOnLinux. After discovering Linux back in the days of Mandrake in 2003, I constantly came back to check on the progress of Linux until Ubuntu appeared on the scene and it helped me to really love it. You can reach me easily by emailing GamingOnLinux directly.
See more from me
Some you may have missed, popular articles from the last month:
53 comments
Page: 1/6»

jordicoma 28 Feb
View PC info
I'hve been using pipewiere on arch for some time now (probably a year), and I have no problems. The transition from PulseAudio to pipewire was seamless, with (almost) no issue. I'm happy with it, even I don't use the advance features.
3 Likes, Who?

View PC info
I rode the change back whenever Fedora swapped it as default and it's been pretty painless. The biggest annoyance I have is that when starting a new audio stream it will start by playing the last half second of the last audio played. Annoying but not breaking. Maybe once a month it will manage to die and need to be restarted.

It mostly stays out of my way which is where I like it.
1 Likes, Who?

garpu 28 Feb
View PC info
It's impressive, but if you do any kind of audio work, it's not quite there yet, especially for real-time audio. But if you're doing that, you're using jack, anyway.
5 Likes, Who?

View PC info
Now if we can get it to work around Discords lack of audio share in some magical Linux way.
3 Likes, Who?

ruskie 28 Feb
View PC info
Hmm I've been doing this kind of stuff with pulse without much of a problem at all - and it gives me network audio as well which is a big use case for me - I funnel all my different devices to a rpi with a dac to output to my primary speaker system.

Haven't seen that with pipewire.
4 Likes, Who?

View PC info
Using Pipewire like two months now. Not only that it is just works, switching from Pulse was also seamless.

I don't have a complicated audio setup nor i use any extra features that Pipewire might bring to table but even with just switching change was noticable.

I was in need of using `PULSE_LATENCY_MSEC=60` on Pulse for some games, lately on God Of War ( lip sync issue(. With Pipewire it is not needed anymore, works out of the box without issues.

Been riding the pipewire wave since mid-2020, results mostly positive, though it's been tough to find parameters for my usb audio card that yield acceptable latencies with acceptable amount of xruns.

Liam, what are you using for music playback that allows for persistent connections in the patchbay? VLC, clementine, and all the other stuff I've tried creates a new source whenever the track changes. VLC (in JACK mode) allows automatic connection to sinks matching a given pattern, but that's no patchbay simplicity.
2 Likes, Who?

Quoting: RaabenMaybe once a month it will manage to die and need to be restarted.

That's bit too much Pulseaudio compatibility for my taste

Pulse is amazing too you know problem is that it lacks Jack-like patchbay UI, everything needs to be done via CLI.