Update 27/12/22: they've removed the logo from it now — good! They said shipping is delayed now though for 1 week.

Chinese accessory brand JSAUX have officially put up their transparent backplate for the Steam Deck.

I know a fair few people love the whole retro transparent tech style, I sure do, reminds me of my original Game Boy Pocket that was transparent so perhaps a late Christmas present for someone? JSAUX say it comes equipped with  thermal grease and a heat dissipation aluminium sheet they claim "enhances the heat dissipation performance through their joint action". Along with the backplate they also have back buttons to go along with it too. 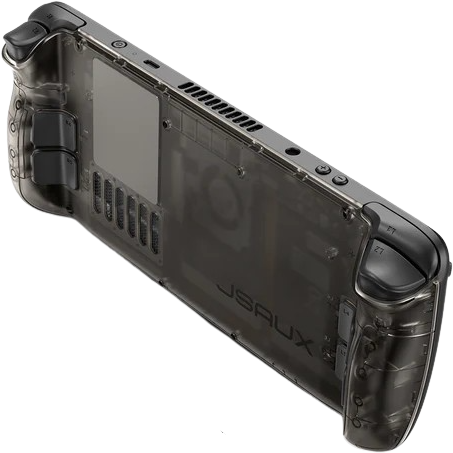 I actually like it a lot, wouldn't mind one myself but I have bad memories of snapping my SD Card when forgetting to take it out after taking off a back cover quite some time ago. I just know I would forget to remove it again.

When I previously talked to JSAUX about doing this after their original teaser, and mentioning to them that Valve's Steam Deck shell designs were under a non-commercial license, they made it clear they did not have permission and were trying to get in touch with Valve. They didn't update me on if they did ever hear from Valve on it and now they're selling it so either they have permission or they're doing it anyway. Or, they simply didn't use any design work from Valve at all, and made it entirely themselves.

I also have various privacy issues with JSAUX, which remain unsolved and JSAUX denied all allegations. After pointing out other issues and being notified that Shopify (who they use for their orders) were investigating them — JSAUX simply stopped replying to me.

View PC info
Firstly, I think the concept is cool.. but... I'd rather my steam deck say "valve" on the back case, than JSAUX.

My other concerns would be: Airflow, has this case got the correct thickness and/or material for correctly absorbing and removing heat?

Does it fit correctly? I mean properly? You don't want a case that "over laps" or "is a little loose".

Quoting: CAVRThat logo in the back... Nope!

If it was a small and sweet logo sure but a big JSAUX in black on it. I agree, it looks ugly like that.


Last edited by Liam Dawe on 23 December 2022 at 2:35 pm UTC
3 Likes, Who?
s01itude 23 Dec, 2022
Hopefully they make a purple one (and reduce the size of that massive, billboard sized logo)!
3 Likes, Who?
While you're here, please consider supporting GamingOnLinux on: