Update: This data has not yet actually been verified by Netmarketshare. When I first took the shot, it wasn't noted, but it's been pointed out in our comments they do now have a link at the top to say so. I fully expect this to be revised down to the current level.

Take this with a rather large bag of suspicion! Netmarketshare is reporting that Linux had 6.91% market share, which is higher than Mac for the first time.

Not only that, but it seems even FreeBSD actually registered on it this time too. 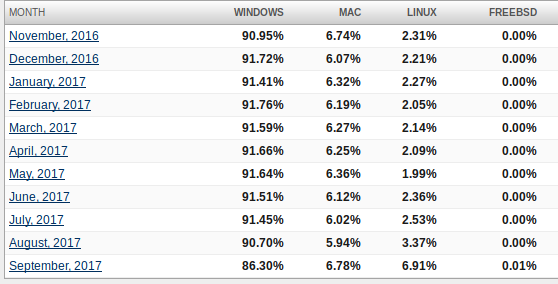 Honestly, it seems far too good to be true. Hold the partying and champagne popping for now. Other sites like StatCounter separate Chrome OS (which uses the Linux kernel), but I believe Netmarketshare does not. StatCounter also shows Linux overall at far less than what Netmarketshare shows.

With that said, both websites have reported Linux growth over the past year. It may not be as large as we want it to be, but it seems multiple sites statistics do report Linux market share is growing and that's the important thing here.

What do you think? A nonsense blip, or Linux really making gains?

We do often include affiliate links to earn us some pennies. We are currently affiliated with GOG and Humble Store. See more here.
About the author - Liam Dawe
I am the owner of GamingOnLinux. After discovering Linux back in the days of Mandrake in 2003, I constantly came back to check on the progress of Linux until Ubuntu appeared on the scene and it helped me to really love it. You can reach me easily by emailing GamingOnLinux directly.
See more from me
Some you may have missed, popular articles from the last month:
The comments on this article are closed.
109 comments
Page: 1/11»

View PC info
According to StatCounter GNU/Linux is at 4% in Germany with ChromeOS being non-existant. One of the rare occassions where it feels like something is going in the right direction where I live ;)
17 Likes, Who?

View PC info
I don't think ChromeOS is much of a thing in Europe in general, I don't know anyone that bought one. Correct me if I am wrong.
10 Likes, Who?

A doubling in one month seems highly unlikely! Unless China suddenly made Linux mandatory, or something :p.
8 Likes, Who?

I know a handful of ChromeOS devices being used. But in general, you're right.

And without a plausible explanation on the huge upturn in the past (two) month(s), I'm gonna consider this a blip.
0 Likes

Quoting: Uramekus"This report contains preview data that has NOT been reviewed by Quality Assurance."

well , yeah, we have our response rn with this.

Hah, that wasn't there when I first looked at it. I'm guessing they've had to put that up, due to how different it is. I did say it was suspicious!

Edit: This is now clearly noted at the top of the article, to prevent confusion.

View PC info
What the heck is ChromeOS?
0 Likes

wojtek88 1 Oct, 2017
View PC info
While I would like those numbers to be true, I am really skeptical.
Before you start to celebrate, just think for a moment. Was there any big release in Linux that would make people start using it?
From my perspective there was none, so it's hard for me to believe that suddenly people started to use Linux without a reason and now there are more than twice Linux users than month before.
This netmarketshare... Who are they? How do they calculate marketshare? Maybe their results are indicating other thing going on. I don't know how do they measure marketshare, but for example, let's assume they are collecting user agent string from multiple pages. It may be indicator, that there is a new botnet of infected Linux machines that are visiting those pages. Other scenario is that there are new crawlers running on one host having dynamic external IP and they do not handle it correctly, hey have just changed the way they are calculating results, etc, etc.
There are many potential scenarios, such a significant grow without a reason makes no sense to be honest.
1 Likes, Who?

Available in Germany, but I don't know anybody who has got one or only considered one.
0 Likes

Quoting: pbAre Chromebooks even available in Europe? Maybe in some of the western countries, but certainly not where I live.

MediaMarkt NL has 15 chromebooks on their website, out of 313 laptops in total. But yeah, about as 'western' as you can get.
0 Likes
1/11»
While you're here, please consider supporting GamingOnLinux on: