Ashes of the Singularity: Escalation inches closer to a Linux release with Vulkan

Some fun weekend news for those wanting another RTS to play, as Ashes of the Singularity: Escalation is getting closer to a Linux release. 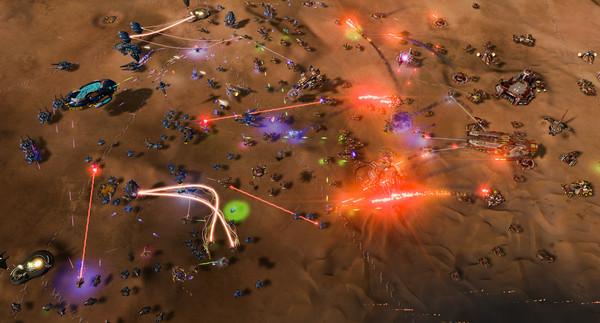 As a real-time strategy game nut, I've been waiting to play it since I first laid my eyes on it. Back in May of 2017, Stardock Entertainment put up a Steam post themselves asking to see requests for a Linux version which caused some more excitement.

Back in September this year, they mentioned the base game engine was on Linux but not the actual game itself. Seems it's moving along, as yesterday they updated that Steam post to say this:

We now have the core engine compiling under Debian Linux and running via Vulkan. We still have a long, long way to go but this is a major step. Thanks for your continued interest and support!

Only noticing it now, as it's a post I follow that the developer has no replied to mention it. Their wording isn't too different to what was said in September though, so keep that in mind.

I like their honesty with it, that we still have some ways to go but they're still working on it so that's great stuff.

Article taken from GamingOnLinux.com.
Tags: RTS, Steam, Strategy, Upcoming, Vulkan
14 Likes, Who?
We do often include affiliate links to earn us some pennies. We are currently affiliated with GOG and Humble Store. See more here.
About the author - Liam Dawe

View PC info
Oh boy, I hope this does come. RTS is what got me into gaming and I still fall back on it.

Stardock are going all in. Vulcan AND Linux....
This is no longer a new game so I wonder if it is being used as a development platform for something else as this will be costing them alot
1 Likes, Who?

View PC info
Now we can have the benchmark game of this generation on Linux =)
2 Likes, Who?

View PC info
It's funny, just before this article i bought it and tried to launch the game via Steam Proton, with different options based on other Linux users. Failed. Refunded.
0 Likes

View PC info
To be honest I hope they optimise the **** out of their Vulkan render to show DX12 up :D

No qualms in waiting for the Linux port if that's what they do!
2 Likes, Who?

View PC info
I'm starting to not like even mentioning developers/games that promise Linux support but haven't delivered on it yet, and given the fact this has been in progress for how long now makes me even more reluctant. Given their update though, I gave in. :P

I wonder how long they're talking about here. Hope it comes eventually regardless!
0 Likes

Thetargos 29 Dec, 2018
View PC info
When I found out this morning I was in awe. Not only for this critically acclaimed title for its own merits in regards to the game experience itself, not to mention the monster engine they built that smacks CPU cycles and its scale in terms of simulation and rendering behemoth. This game will not only mark a milestone for the genere (as it did when it was originally released) on Linux, but also it will be VERY interesting to see just how will it not only be a test for hardware, but highlight the core differences between OSes and the more intriguing aspect of the scheduler and thread management (already made apparent with other software suits ins regards to Win Vs Lin). I DO hope they will be able to deliver crossplatform multiplayer, that would be THE killer feature for sure.
2 Likes, Who?

Quoting: pete910To be honest I hope they optimise the **** out of their Vulkan render to show DX12 up :D

No qualms in waiting for the Linux port if that's what they do!

Their Vulkan renderer has been available for a while on Windows as an alternative to d3d12, and IIRC performance is similar. Great for Windows 7 users who don't have access to d3d12.
2 Likes, Who?

Quoting: pete910To be honest I hope they optimise the **** out of their Vulkan render to show DX12 up :D

No qualms in waiting for the Linux port if that's what they do!

Their Vulkan renderer has been available for a while on Windows as an alternative to d3d12, and IIRC performance is similar. Great for Windows 7 users who don't have access to d3d12.

And I think that's actually kind of the point. Microsoft will never backport DX12 to Win7/8 but the truth is with Vulkan it's not needed. As long as drivers keep showing up supporting Win7/8 Vulkan can keep people from having to switch to M$'s bloated spyware. Would obviously be better if they switched to say, Mint or something, but for the die hard gamers Vulkan at least gives them options within the Windows ecosystem.

I'm still on the RHCSA/RHCE track, but I am thinking of switching to C++/Vulkan because the next PeasantStation is going to use Vulkan, same with Android, same with Linux, and the same with Windows. Apple decided to lock their graphics API down instead of making it easy for game devs, so their loss, and the XBone will of course use DX12.