I'm personally sad about this, as I have been following Enemy Starfighter for years. It reminded me of Freespace 2 which is my favourite space sim of all time. The developer confirmed to me it's no longer coming to Linux officially, but he may team up with a porter in future. 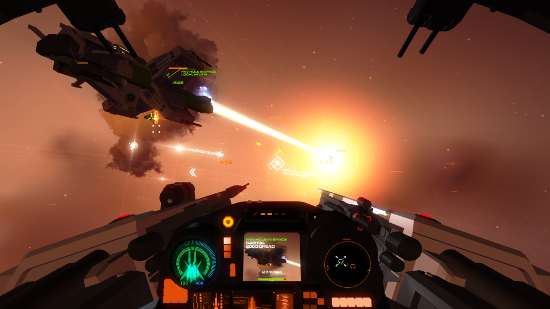 Here's what they said in reply to me about Linux support:

@thenaughtysquid No, not anymore, sorry!

And about the possibility of someone else porting it:

@thenaughtysquid That's definitely a good solution I'd consider down the line. A few cool people have talked to me about it.

I seriously hope he does get someone in to port it, as it looks awesome.

What is Enemy Starfighter?

Enemy Starfighter puts you in the cockpit of the universe's most terrifying interceptor and gives you command of a vengeful fleet of Imperial warships.

View PC info
Noooooooooooo! I want this one so badly. :-(
1 Likes, Who?

aristorias 10 Apr, 2016
View PC info
Jesus christ. It is unity. It is singleplayer.
There is no reason for this -.-

View PC info
Yes, why? was really looking forward to it, especially with a VR headset :(
0 Likes

Mountain Man 10 Apr, 2016
View PC info
Sounds like another developer who painted himself into a corner with the "develop for Windows now, port to Linux later" attitude. I really hope developers will start being more conscientious about cross-platform support in the future.
5 Likes, Who?

Quoting: aristoriasJesus christ. It is unity. It is singleplayer.
There is no reason for this -.-

If they are talking about a "port" possibly in the future, maybe the game is less cross-platform than we know. It should be a simple click Export to Linux, but perhaps they've highly customized it?

doesn't make sense.
rather looks like he don't want to test/support it.

View PC info
On their Blog they say the following:

After reading a hugely informative launch thread on the Indie MEGABOOTH alumni list, Enemy Starfighter will only be launching on Windows. Mac and Linux versions are now off the schedule, and I'm not sure if/when they will come back. After doing some export tests, I came to the conclusion that I simply don't have the resources to make these versions happen without sacrificing the quality of the lead Windows build.

Oculus's decision to focus on Windows makes this an easier choice for me too. But if SteamOS gains traction, I will take another look at supporting that.

Thats really sad because i like such Games very much.
This was an must buy Title for me.

Devlin 10 Apr, 2016
So they build the game for Windows and when they tried to export it they found unforseen issues with the process, as has happened countless times before. Some companies make good on their words, even if later down the road, like Larian, others simply cancel the game.

The developers should start referring to the Linux version as port, it should cause less surprises in the future when they decide to cancel or delay it. That's the difference between planing a real cross platform support and treating other systems as an afterthought. I'm fine with either, Windows has the marketshare and I understand that a developer may decide to focus on it, but at least they could say so from the beginning talking about ports and not supported platforms.

QuoteBut if SteamOS gains traction, I will take another look at supporting that.

Back to the old catch 22. We need games like yours in order for it to gain traction in the first place!
2 Likes, Who?

View PC info
Huh. Well, on the one hand, he has been working on it for years it seems, so maybe he just wants something, anything, to launch, and Windows is where the bucks are. Ok, I can get that, I suppose.

But on the other hand, maybe it's like Mountain Man posted above:

Quoting: Mountain ManSounds like another developer who painted himself into a corner with the "develop for Windows now, port to Linux later" attitude.

I'm wondering if his mentioned "export tests" were the first time he realized that there was going to be more to creating Linux and Mac versions than simply clicking "Export."

I'm inclined to be less impressed with Enemy Starfighter than I might have been because that, to me, implies a dearth of planning skills, foresight, and even imagination. Even the title, Enemy Starfighter, seems more like a utilitarian afterthought than any real attempt to capture the imagination.

Developers who fail to follow through on a promised Linux port are no loss to me. The loss is all theirs.

Quoting: aristoriasJesus christ. It is unity. It is singleplayer.
There is no reason for this -.-

If they are talking about a "port" possibly in the future, maybe the game is less cross-platform than we know. It should be a simple click Export to Linux, but perhaps they've highly customized it?

It's almost never as simple as "click Export to Linux". This is probably another middleware issue.

Not a game I had any interest in, as exploring, trading, and building stations and trading empires is my jam in space sims, and this seems completely combat focused, but it's still sad to hear.
1 Likes, Who?
1/2»
While you're here, please consider supporting GamingOnLinux on: