Interstellar Marines [Steam] was one of the most promising FPS games in a long time, until they basically ran out of money. They're still going and this latest updated fixes a long-standing Linux issue.

One of their online game modes "Wargames" can only be joined at specific times, the problem was on Linux the timer was always in a negative and just didn't work unless you set your regional settings to the US. The latest update this week finally fixes that issue and I've been able to actually test it. Turns out—it's actually pretty cool. Confusing as hell, but cool.

Wargames in Interstellar Marines is essentially an open-world sandbox area where you all compete for points. You find crates with points, weapons, ammo and so on. There's a Scavenge wargame mode where you can just grab as many points as possible (the only one that seems to be online right now). Then there's the Battle Royale wargame mode, where it will start eliminating players with the lowest score, until there's only three left and a winner is found. There's armed robots to deal with and other players in a bunch of connected maps you can travel between. It's a little confusing, something they should really explain to the player a bit better, but I love the idea of it.

Surprisingly, there's actually people still playing it online. I was even able to jump into a normal Deathmatch mode and get a recording of it. It reminded me of why I was so excited about this game! It feels good, the maps are dynamic and it can be a little freaky: 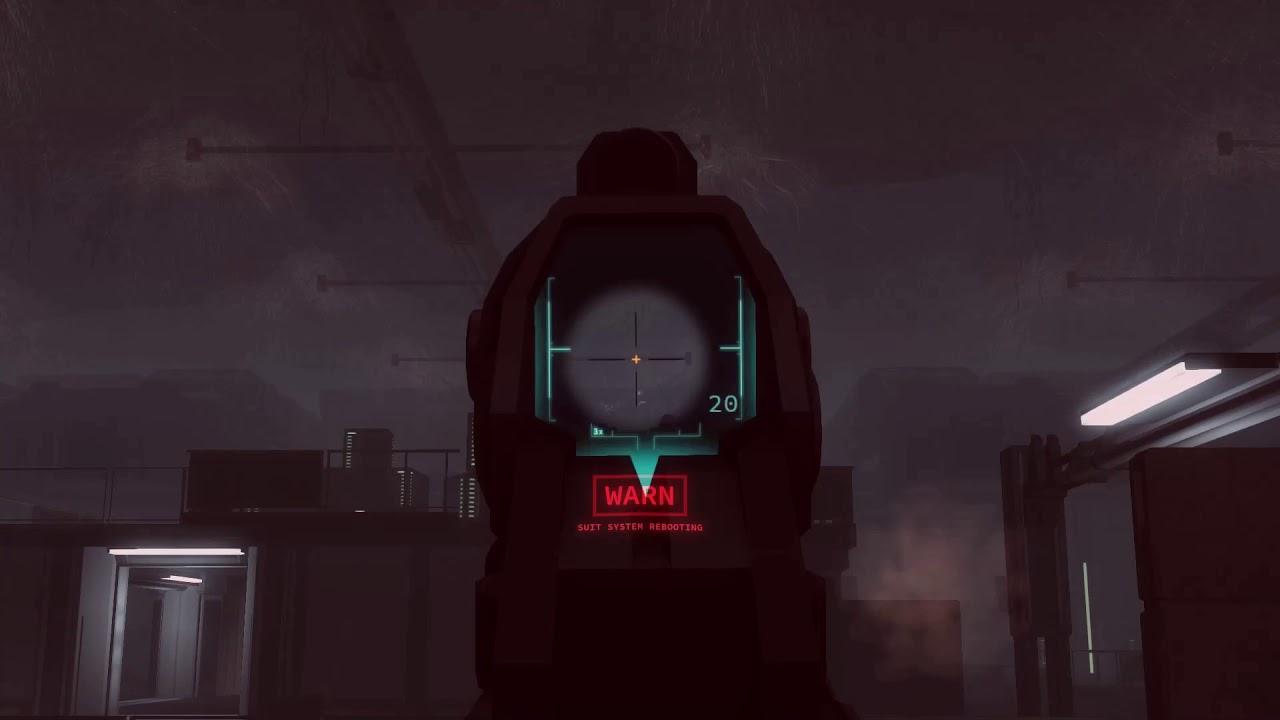 It has some of the most dynamic maps I've ever seen that switch between night and day, parts of the maps move around, there's weather effects and more.

I really hope they can continue working on it, as it is still really promising it just needs a big push. The lone survivor of Zero Point Software, Kim Haar Jørgensen, is still working on the game in their spare time while they work another job to keep income coming in. There's also some volunteers helping with art and code now.

If they do manage to come back in full force, I do hope they start focusing on the single-player and co-op again, as that's what was interesting about it originally. It has a few good missions, but it needs more. I think the online focus is part of what their problem was, they just didn't have a big enough player-base for what they were doing, as so many people were interested in the single-player and co-op experiences.

Article taken from GamingOnLinux.com.
Tags: Early Access, Action, FPS, Indie Game
14 Likes, Who?
We do often include affiliate links to earn us some pennies. We are currently affiliated with GOG, Humble Store and Paradox Interactive. See more here.
About the author - Liam Dawe

QuoteIt feels good, the maps are dynamic and it can be a little freaky:

I played some yesterday again, and i like the general feeling of the game. I do hope they manage to deliver.
0 Likes

View PC info
I've always had high hopes for this game. I hope they can pull through and make it work. I think honestly they should drop the story and focus on multiplayer gameplay.
1 Likes, Who?

orochi_kyo 19 January 2018 at 7:54 pm UTC
View PC info
This is a good game with recoil on weapons, how this isnt exactly a financial success and other much worst games are beats me. I dont understand nowadays gaming.

View PC info
Wow, seriously mixed reviews on Steam on this one, mostly around the slow development pace and limited weapons (which doesn't bother me). I love the idea and look. At $9.99 for a long gestating early access, it's not pricey, but not quite a cheap, "Sure, to support a Linux dev, why not?" For the Linux gamer, what do you all think?

iiariWow, seriously mixed reviews on Steam on this one, mostly around the slow development pace and limited weapons (which doesn't bother me). I love the idea and look. At $9.99 for a long gestating early access, it's not pricey, but not quite a cheap, "Sure, to support a Linux dev, why not?" For the Linux gamer, what do you all think?

Go for it mate, great fun for so/coop and MP is like an extra slice bonus, I advise pants though ;)
0 Likes
DoomsdayOrange 20 January 2018 at 2:01 am UTC
Hey, IM volunteer developer here, just want to state a minor thing, Kim isnt the only person working on the game anymore. He has gathered many experienced individuals like me to volunteer with the development of the game, and since were all working for free, we dont have to run into the issue of funding. That is all.
9 Likes, Who?

If you feel this game migt be your cup'o'tea, try it! It is quite immersive, and quite a unique experience... Interesting environments/maps, changing weather - adding another tactical level on the battlefield, several different game modes, and challenging freaky survival mode with robots

Also, coop survival modes for up to 4 players, which will make you s*it your pants, even if there are 4 of you covering your backs

jasonmI've always had high hopes for this game. I hope they can pull through and make it work. I think honestly they should drop the story and focus on multiplayer gameplay.

The mixed to bad reviews are not directly connected to the game quality itself, but people got tired and frustrated with things like slow development speed (dev team promised to add a lot, and due to various reasons did not add that much content and focused on bugfixing) and also - as it seems now - they have made a mistake by adding more multiplayer, whilst community expected huge and shark-moster-filled-in-space-slaugter-epyc single player campaign (which was promised from the beginning but was never fully realized/delivered).
Thus community got frustrated (this took a year or two, though), dev team lost the community support, bad reviews starting piling up and in the end, they run our of money before they could deliver some of the more advanced game-mechanics (hunting for loot, weapons, ammo, health) and before they could create more of the "real" content - the big story, and landsharks, which community was waiting for....

jasonmI've always had high hopes for this game. I hope they can pull through and make it work. I think honestly they should drop the story and focus on multiplayer gameplay.

Interesting. I couldn't disagree more. I found the multiplayer to be, while playable, both lackluster and empty. The co-op of this game is what made it shine above all others. My friends and I once played through the Neurogen Incident with all the lights off, and as things in the game escalated, we started screaming as the intensity grew and we were running around like mad trying to keep our perimeter clear and push the objective.

I really wished the co-op/campaign was *more* fleshed out before they worked on hell-week/wargames (The earlier regular deathmatch stuff was fine for the time being). I wasn't expecting a 10 hour campaign to be done in a year, but every 3 or 4 months, if they came out with a new co-op training mission, map, etc. then I think the bulk of the player base would have stuck around.

I still think Interstellar Marines has huge potential and really hope it can be more fleshed out in the coming months/years. Somethings I'd really like to see more than anything:

-A way for players to run their own server should be released (dedicated or listen)
-A limited editor (to allow for players to create their own "training scenarios" within the underground complex)
-Workshop Content
-More Single Player/Co-op missions (slowly but steadily, I think this is key). If they were added at regular intervals, I think this would be enough to bring many back to the fold.

iiariWow, seriously mixed reviews on Steam on this one, mostly around the slow development pace and limited weapons (which doesn't bother me). I love the idea and look. At $9.99 for a long gestating early access, it's not pricey, but not quite a cheap, "Sure, to support a Linux dev, why not?" For the Linux gamer, what do you all think?

I think it's well worth $10. I really enjoy the game and I look forward to it getting better.
0 Likes

View PC info
How many FPS you have in this game? I have very low no idea why, maybe IM not like mesa3d?