Game store itch.io are doing some fantastic things and so it's time to highlight it a bit. They just released a massive overhaul to their open source client!

Here's how the new and improved client looks, pretty slick right? It's blazingly fast too, from clicking the itch application button to actually logging in took around 2-3 seconds. When you want to just play your game, that's the kind of speed you want to enable you to quickly get going. 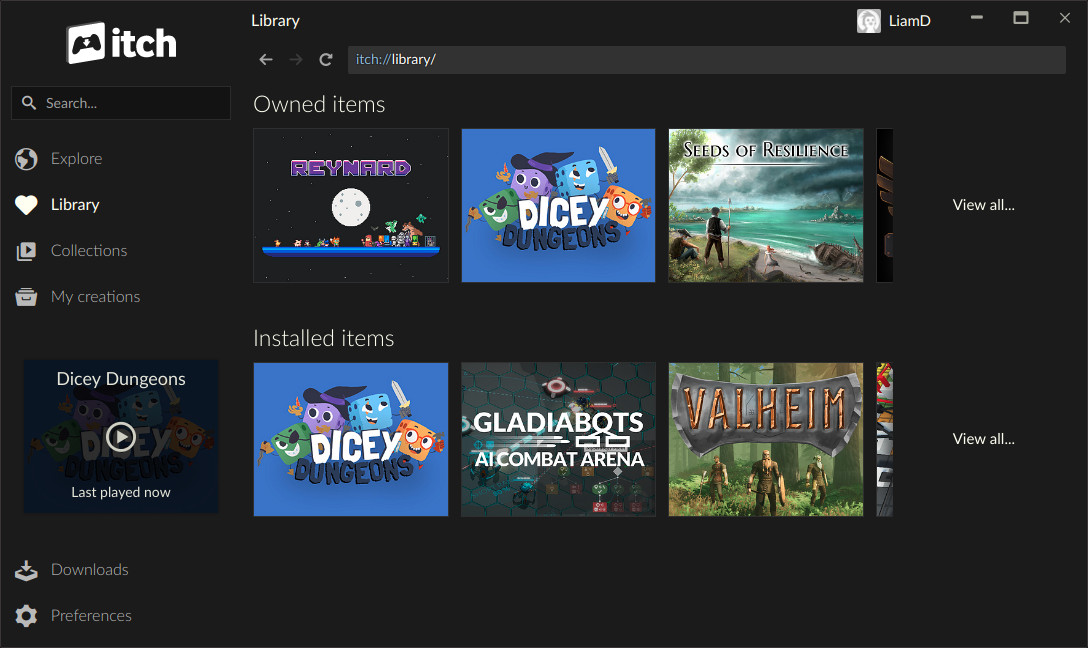 I spoke to the developer of the itch client, Amos Wenger, to have a chat about what's new and improved plus a few other things.

GOL: Why did the itch app need a redesign? What does the new version solve that was wrong in the previous version?

AW: "The redesign is only the tip of a very large iceberg! I would say that v25 is "a proper re-engineering" of the app.

We originally released the app to power Overland First Access. Our command-line upload and patching tool, butler, was released around the same time.

Since then, we've been adding features left and right - and with organic growth, codebases tend to get messy. At over two million downloads (updates included, deb/rpm/AUR downloads excluded), it was pretty obvious that the itch app was here to stay, so I decided to bite the bullet and clean up the foundations of the app.

It didn't start out as a complete rewrite, but I ended up replacing almost everything that matters. In previous versions, almost everything was written in TypeScript (the interface, but also querying the itch.io API, storing it locally for offline use, extracting games, configuring and launching them, and so on).

In the new version, all core responsibilities have been shifted over to butler, which is now running as a daemon (although it starts and stops with the app).

This changes a lot of things. Since concerns are properly separated (and often split into their own project), it's easier to test individual parts of the app - giving us a more reliable product overall.

In fact, when developing new features, I often just use a command-line butlerd client! This also opens up new possibilities, like developing completely different interfaces that have the same solid install/update/launch engine - and can even share game libraries.

Thanks to this and other changes, the app starts up faster, uses less memory, and needs less disk for itself and for installing games. I'm going to be releasing a series of postmortem articles that go over the architecture changes in-depth in the next few weeks.

Finally, there's a whole new installer - the itch app is now distributed directly on itch.io, patched with the same technology any other itch.io game is. That means that the Linux version of the app is finally self-updating, just like the Windows & macOS builds."

GOL: Could you list some benefits of developers putting their games on itch.io?

AW: "There's a bunch of good reasons! Launching on itch.io first gives developers a smaller but friendlier audience to test their game. You can design your page however you like it and manage your community the way you want.

After launch, it's easy to maintain the game up-to-date by adding butler to your deployment workflow, and you can run your own sales and bundles. The percentage of sales that goes toward supporting itch.io is up to you - it defaults to 10%, but you can adjust it to anything you want.

Ultimately though, I think the best reason to support itch.io (by publishing and buying games there) is because it's unique. We're a small team working remotely, and from the beginning we've set out to provide creators with the best tools to let them distribute their content, whether it's paid or free.

We've stayed away from ads, investor money, and buyouts. All this was made possible because of fans supporting creators no matter where they publish, and creators entrusting us with their games, comics and more in the first place."

AW: "I think it's important for developers to make sure their game runs fine in the app.

In the coming months, we'll be integrating the website and the app more closely. It'll still be possible to download games directly from the website, but the app will be presented as the first and best option, just because it's so much easier for users.

It's also the easiest way for developers to test API integration. It's minimal for the time being, but expect some news on that front in the near future :)"

GOL: What are your plans for the future of the itch app, what do you hope to achieve with it?

AW: "Now that the big refactor is over, there's a ton of stuff I want to do. I mentioned we'll be developing our API, I'm sure you can imagine what's in store there - but I'm also excited about other projects like capsule, which should make it even easier to share cool gems you find on itch.io.

I'm also looking forward to see more bigger games that fully embrace itch.io. We already have more than people realize, but now that itch v25 is out, we feel even more confident in supporting them. The ball's in your court, developers!"

I would like to thank Amos Wenger for having a chat with me today, always nice to learn more about what other interesting game stores are doing. Truthfully, I didn't even realise their collection of some bigger titles had grown as large as it has. There's some real gems to be found there and I do hope more developers look to itch, as having all your eggs in one basket isn't the best of ideas.

I especially like how they host game jams, where developers come together to create all sorts of unique game ideas. A lot of them end up getting taken further into development too.

View PC info
I do wish they'd better integrate the VAT into pricing. It's a bit off-putting to see the VAT pop up separately.

Otherwise, I love Itch. It's a bit more chaotic feeling compared to Steam, but they have a great interface, clean, easy to use client and some Devs even offer a Steam key with an Itch purchase, so you get the best of both stores (of course, not always).
5 Likes, Who?

View PC info
Basically I see Itch as Bandcamp, but for games. Love the fact that small projects and developers have a place to go without having to deal with the sort of hoops the big stores need to put in place.

I see they've been working a lot on discoverability, which is really key for a service like this. Stuff like capsule should help, and I'll be interested to see what else they add in that vein in the future.
2 Likes, Who?

View PC info
hmm my itch client is "Up to date" but it still looks the same as before. Did it not reach their bintray repo yet?
0 Likes

View PC info
I hope Amos gets around to implementing cross-platform dependencies. He has already improved multi-platform support by allowing game archives to specify OS-specific launch paths based on my suggestion.
0 Likes

I pay money so that someone else can organize, update, and manage my games.

View PC info
I wonder if these sort of clients could use valves proton in the future if they supported it?
2 Likes, Who?

View PC info
Kinda lame you can't download the installer script separately. If I click Linux on the download page on my Chromebook, it takes me back to the main download page for the app, and download now says "no downloads found for your OS".

Edit: Entering "https://nuts.itch.zone/download/linux" seems to work. The installer is a GUI, so you can't invoke it via the CLI without a display..

View PC info
I'm not too fond of the new high contrast interface look, is a bit too harsh for my eyes and I have to squint when I look at it. The old one was more pleasant.
I've look in the settings but haven't found any way to change it.
1 Likes, Who?

Quoting: GustyGhosthmm my itch client is "Up to date" but it still looks the same as before. Did it not reach their bintray repo yet?

I was wondering the same thing... you have to uninstall the previous version, and download/install the latest version. I guess it changed too much to update from pre-25 to 25+.
1 Likes, Who?

On the other hand, my issue got acknowledged in minutes. Not bad.

Edit:
And not even two hours later, it is already fixed. Not bad, at all.