Homefront: The Revolution gamespot video looks good, but it will feature microtransactions 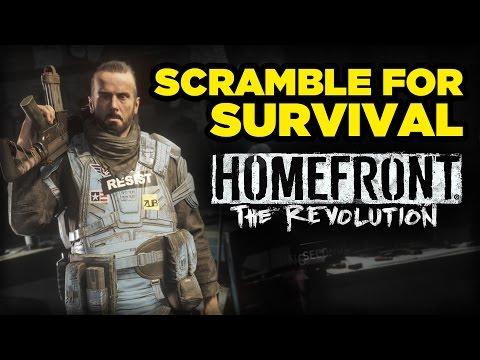 YouTube videos require cookies, you must accept their cookies to view. View cookie preferences.
Accept Cookies & Show   Direct Link
This is exactly the kinda of shooter I have been missing on Linux, and I am ever so happy it's coming to our platform.

You earn items and customization bits as you play that seem to come in cases you open, but it will also be featuring microtransactions.

I am torn on this issue as always. I don't agree that a single player and co-op game should feature microtransactions at all, especially since you're going to be paying likely £30-40 for the game in the first place. As long as they don't get in the way, I won't really care though if the gameplay is good.

To quote the video


QuoteThey made a really big statement that it's not pay 2 win.

I hope this turns out to be true. It wouldn't make any sense at all to make a single-player game pay 2 win.

The upside is that they have promised a full year of free DLC with no season pass. That's pretty rare. Although, I wish they would just call it patches, I miss developers just saying patches. Everything is DLC this, DLC that. Article taken from GamingOnLinux.com.
Tags: Action, FPS, Steam, Upcoming
0 Likes
Share

drjoms 27 Jan, 2016
View PC info
Not pay to win they say. So if it's true, seems like very good game.
I have seen games with micro transactions which were all right.
0 Likes

Quoting: drjomsNot pay to win they say. So if it's true, seems like very good game.
I have seen games with micro transactions which were all right.

In some games it is done fine, CS:GO has a good balance for example.

Dota 2 and TF2 have a nice balance, not the best examples since they are free, but they still do it nicely.
0 Likes

View PC info
Totally different genre here, but Fishing Planet another example of a game with microtransactions, and even premium subscriptions, but it is not pay to win. It is, however, super grindy. Still, if you enjoy the core mechanic of fishing, it's not that bad. As an avid fisherman, I've found it to be the best fishing game I've tried so far, and it fills the gaps nicely when the weather is poor, or I'm stuck at home waiting for the lakes to freeze up (or thaw, when Spring rolls around). I have put around 70 hours in and tossed them a few bucks for my enjoyment, in the form of a month's premium subscription (basically gives a 50% XP bonus and some free licenses and in-game money).
1 Likes, Who?

Liam Dawe 27 Jan, 2016
View PC info
For Homefront, if you like shooters and the gameplay is as interesting as it looks in the videos, are you really going to care for optional micro? Probably not, I won't considering no other "player" will have an advantage over me considering it's a single player/co-op game. I don't really see it as a big issue here myself, and it will help fund the free content additions they claim to be adding. As we know what publishers are like after a game is finished, this will allow the devs to carry on with it I hope.
0 Likes

View PC info
The game looks and sounds great, though the idea of microtransactions in a full priced title doesn't sit well with me. Let's hope they stick to their word of it not being pay to win, but whenever I see microtransactions in a full priced game I always fear that they balance the game around the idea of people spending money, purposely tuning the drop rate of certain items down to make the game excessively grindy to get the items you want so as to encourage people to spend real money. Only time will tell, I guess. On the brighter side, the year of free DLC is quite welcome, even if the DLCs wind up being rather minor.
0 Likes

minj 27 Jan, 2016
Patches? What patches? Surely AAA games don't need any patches since they are tested to perfection on day 1.

View PC info
If it's not pay to win, can't they just release a series of mini-DLCs - like they do in Saints Row - instead? Just to have a purchase nagging inside the game - no matter how discrete (let's face it, they're not gonna hide it too well) - is just so... Cheap. And breaks immersion.

What's wrong with the mini-DLCs? If it's fully optional anyway?
0 Likes

View PC info
Disclaimer: Not trying to kill anyone's buzz, but I am generally a critical person :P

I'm pretty turned off when a $60 game has the balls to start playing the "Please, sir, can I have some more?" gambit. Though considering 'year of free DLC' it might be justifiable, though I'd wait until finding out what this DLC is exactly to make that call. That said, such a model could be a preferable since the alternative of paid DLC maps and such in a multiplayer focused game would split the community. It was also stated that nothing is exclusive to those who pay, the micro-transactions anyway.

However, I still think it's quite a slippery slope to support developers making games with free to play models that aren't actually free. Especially since there's no doubt that such models have to make a challenge curve to incentivize players to part with their money. If I'm paying $60 for a game I want a proper experience curved accordingly. They say it's just for people who don't have time, but such a statement deepens my fear of how much this has affected the development of the game (and if you check out the history of said development it's quite murky in itself.

And personally, I prefer either a good competitive shooter or a linear single player one (Wolfenstein: The New Order was a blast btw <3). This whole open world co-op thing leaves me feeling rather uninterested, not to mention that it reeks of following trends, as it'll likely mean a lackluster narrative and bland character, if any. This could partly be because I'm an anxious twat who resents being forced to cooperate with people who aren't in the same room

I may still get the game if it's good, but I'm certainly going to do my research beforehand (as if we penguins don't need to do that already :P).
2 Likes, Who?

Looks like gamespot was paid to only say good things about the game. Still, I hope it will be good!
0 Likes

Quoting: drjomsNot pay to win they say. So if it's true, seems like very good game.
I have seen games with micro transactions which were all right.

In some games it is done fine, CS:GO has a good balance for example.

Dota 2 and TF2 have a nice balance, not the best examples since they are free, but they still do it nicely.

This comment monkey-wrenched my brain since CS:GO and Dota 2 + TF2 were separated as if to contrast.

I don't know about TF2 or CS:GO, but in Dota2 the buying/selling of items, skins, etc... for Steam Wallet Money seems like it enhances the game as no items really effect the player's stats.

Then there's League of Legends where you can pay for runes to get a 10-15% advantage over competitors and noobs. Also pay real money to unlock heros that are new and overpowered. Yeah...


Last edited by ElectricPrism on 27 January 2016 at 9:38 pm UTC
0 Likes
1/2»
While you're here, please consider supporting GamingOnLinux on: