With all the games we have on Linux now, let’s not forget some of the defining classics like Half-Life 2 which I have finally finished.

Yes, ~13 years after release I have finally finished it. Although, let’s be fair, it’s only been ~3 years since it released on Linux and I have had a lot of other games to keep up with. Still, I wanted to see what all the fuss is about and why people want Half-Life 3 so badly, so I powered through the entirety of Half-Life 2 during a few livestreams.

I played through using the Half-Life 2: Update standalone mod which arrived on Steam last year. It’s the exact same game in terms of story, but with improved visuals and some bug fixes. I felt that was the best way to experience an older title with maximum possible enjoyment. It makes an old game look sharper, shinier and just better overall. It's also perfection on Linux, I didn't encounter a single issue during my entire play-through which is incredible.

If you haven’t seen it already and fancy a laugh, check out the video Samsai stuck together showing off some of my fails during the livestreams.

What an incredible all-around experience Half-Life 2 truly is. The first hour or two didn’t really hook me in. While it was fun for sure, the start felt like it lacked a bigger push. Once you get past that — wow, the game truly does start to come together. The amount of effort that was actually put into this game is mind blowing when it opens up some more. I can see where so many games, even games still coming out, take some inspiration from. Half-Life 2 has such varied gameplay and some really fun enemies, it’s quite surprising given how old the game is.

The varied locations, ranging from an open-world style game where you’re driving a buggy and you’re able to get out and look around at any point, to dark and gloomy caves filled with creepy crawlies where light plays an important role in the immersion. The dark sections were probably some of the most tense I’ve played in any game, as sometimes you would see nothing but dead bodies leaving your mind to wander, sometimes zombies and so on. The atmosphere the game creates is testament to the Valve of old that made great single-player experiences.

During livestreams the game would repeatedly make me squeal with surprise and fear when enemies jumped out at me. One of the enemies will stay with me for a long time! An enemy not too unlike the Xenomorph type aliens you would find in the Alien series of films. They run, climb buildings, they jump and they scream at you as they come for you. A lot of butt-clenching and panicked firing happened whenever they were around, one of the best enemies I’ve ever faced in a game. 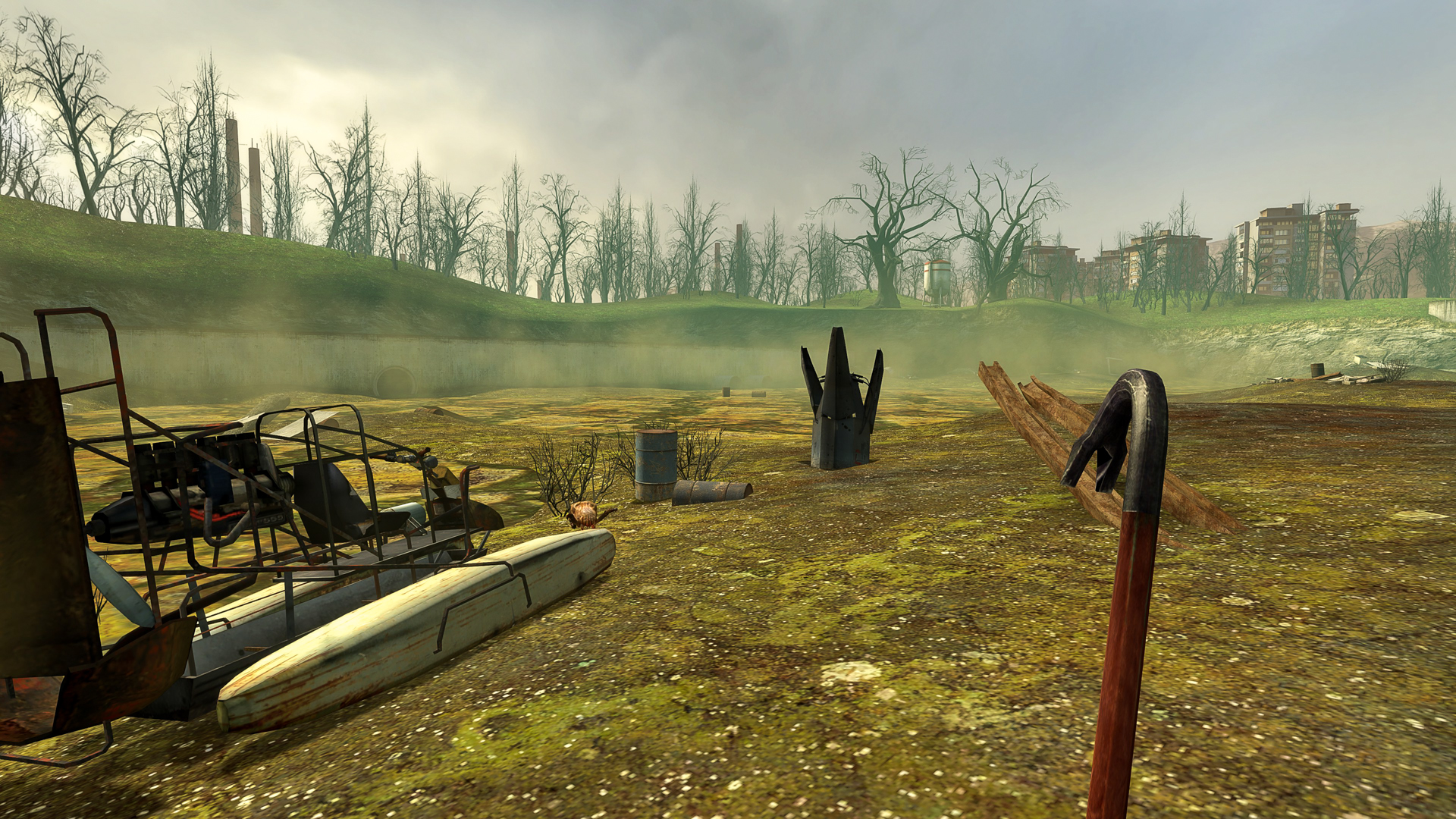 There are so many moments in Half-Life 2 that are memorable, from being chased by a helicopter while powering across the land in some sort of small hovercraft, to running through dark alleys hoping head-humpers don’t jump out at any moment causing me to wildly panic and employ my trusty "spray and pray" shooting style.

Half-Life 2 has well and truly left a lasting impression on me for sure. I can see why so many people speak highly of it, as it stands up to the test of time for absolute certain for so many reasons. Sure, some parts of it were Valve showing-off their Physics engine, but even today it’s still vastly better than what we see in a lot of games with much bigger budgets.

Seeing the Combine forces battle against zombie-like humans with headcrabs on them was also surprising. There’s many surprising moments like that, from seeing the remains of larger battles in rooms full of turrets and blood, to setting up your own turrets as wave after wave of Combine soldiers bear down on you.

The AI, while not amazingly smart, is again still better than a lot of the AI you find in shooters today. Enemies will find cover, throw grenades, wait for you to come to them and not just run directly at you all the time. There are times it falls flat, like when you have a bunch of companions near the end and they repeatedly block doorways, but for the most part the AI in Half-Life 2 is still impressive today.

Like a lot of games, the ending battle was a bit of a letdown. Really though, that’s probably the only part of the game that was a letdown. It reminds me of Dying Light, a fantastic single-player campaign with an ending where you don’t really do much. You’re just firing balls at a tower with your Gravity Gun and in a few minutes it’s all over.

To think, when the game came out the PC I had at the time could barely run it, now I’m running it at around 300FPS with graphical enhancements, all on Linux.

It took me around 12 hours to fully finish it, which is a pretty decent length. It’s not so long that the story drags on, but not so short as to leave too many things out. The way the story is presented is brilliant too. You’re not repeatedly given cut-scenes, as the story unfolds literally as you’re playing and makes the action and the story blend seamlessly together in a way not many developers are able to achieve.

If like me, you still haven’t set aside some time to play Half-Life 2, you seriously should. If you’ve been sitting on the fence about it since forever, then take my advice and download it right now. I’m going to take a look at the episodes next, so I can finally see if I need to join the ranks crying out for Half-Life 3.

Just be sure to play Half-Life 2: Update. It’s the exact same game in terms of story, only with some graphical enhancements done to bring it up to date a bit more.

Oh and who the hell is the man in the suit? Article taken from GamingOnLinux.com.
Tags: Action, FPS, Review, Steam
15 Likes, Who?
We do often include affiliate links to earn us some pennies. We are currently affiliated with GOG, Humble Store and Paradox Interactive. See more here.
About the author - Liam Dawe

I am the owner of GamingOnLinux. After discovering Linux back in the days of Mandrake in 2003, I constantly came back to check on the progress of Linux until Ubuntu appeared on the scene and it helped me to really love it. You can reach me easily by emailing GamingOnLinux directly.
See more from me
The comments on this article are closed.
45 comments
Page: «2/5»
Marky 3 March 2017 at 11:19 pm UTC
Be warned Liam, finishing Half-Life 2 and not having Half-Life 3 is okay, but finishing the episodes and not having Half-Live 3 is tough.

EDIT: I still recommend playing the episodes though, since they are great. The last hour or so of episode 2 is my favourite part of the whole series.

View PC info
Half Life 2 and it's episodes are some of the few games that I can play over and over again. Much like Harry Potter, I find myself defaulting to them when I'm out of other things to play. It doesn't help that I don't like strategy and RPGs, so for a while there wasn't much else to play.

On a another note, I finally finished episode 2 recently, with a Steam Controller! That final battle was epic, but overwhelming for a while.
3 Likes, Who?
iniudan 4 March 2017 at 12:11 am UTC

FedaSomeone gave me boxed version of that game when it came out and I never got around to installing it. I wonder if the serial would work for Steam.

It should, I got a platinum collection of Half-Life when I purchased my first PC, in 2001, registered perfectly fine the first time I installed steam, after looking up wtf all the TFC server had went, after reinstalling the game in august 2004.
0 Likes

View PC info
Just recently completed Shadow Warrior (2013). Great game, much fun was had. Now hurry up and release SW2 for us Linux gamers.
1 Likes, Who?

g000hJust recently completed Shadow Warrior (2013). Great game, much fun was had. Now hurry up and release SW2 for us Linux gamers.

Off topic, but I agree completely. Shadow Warrior was the little game that could. A no-name developer, remaking a ridiculous old fps from the nineties, whose main character was named Wang. What could go wrong?

Nothing apparently. Epic game; all the feels. The sequel can't come soon enough.
1 Likes, Who?

Traversy 4 March 2017 at 4:44 am UTC
View PC info
Same here, I started this game back around 2009 when I was in high school, got to ravenholm and then stopped. Picked it back up last year and finished it because I converted to Linux and basically threw away most of my windows games catalog.

I didn't play the update mod though, I had a GT 240 at the time, and so I just went with turning up AA and AF, instead. It was pretty much the only recentish linux 3d game I could play on high quality settings.
0 Likes

View PC info
With HL1 I was and still am stuck in Xen between the Gonarch and the Nihilant. HL2 was different. Finished the base game several times - I find all levels stunning: Ravenholm, the highway section, the "water hazard"... Episode I was - relatively speaking - a bit of a letdown. Episode II cranked it up again, but I never finished the final battle against the Striders with the Magnusson Device. Shame.


QuoteRise and shine, Mister Freeman. Rise and... shine. Not that I... wish to imply you have been sleeping on the job. No one is more deserving of a rest, and all the effort in the world would have gone to waste until... well, let's just say your hour has... come again.

View PC info
Is Black Mesa a viable alternative? I'm not sure if I feel like playing a 13 years old game. If you've played those games from the very beginning it's not a problem.
1 Likes, Who?

cRaZy-bisCuiTIs Black Mesa a viable alternative? I'm not sure if I feel like playing a 13 years old game. If you've played those games from the very beginning it's not a problem.

I'd say it's very viable. Naturally it still doesn't have Xen but the rest of the story is in there. And from what I've heard, Xen isn't necessarily the best part of the original.
0 Likes
«2/5»