By crakkhead - 24 January 2014 at 1:43 pm UTC | Views: 21,478
The Kickstarter page for the open world sandbox RPG built on the CryEngine promises Linux support.

From the Kingdom Come: Deliverance Kickstarter page, the game is a (emphasis mine)

QuoteA first-person, open world, realistic RPG that will take you to Medieval Europe in a time of great upheaval and strife. A humble, young blacksmith loses everything to war. As he tries to fulfill the dying wish of his father, Fate drags him into the thick of a conspiracy to save a kidnapped king and stop a bloody conflict. You will wander the world, fighting as a knight, lurking in the shadows as a rogue, or using the bard’s charm to persuade people to your cause. You will dive deep into a sweeping, epic, nonlinear story from Daniel Vávra, an award-winning designer from the Mafia series. Our unique, first-person combat system lets you wield sword or bow in both one-on-one skirmishes and large-scale battles. All of this - and more - brought to life beautifully with next-gen visuals delivered via Cryengine.

* Publishing on closed platforms is subject to approval by the platform holder. This can also influence release date there.

According to the CryEngine Wikipedia page, this would be the first game built on that engine that supports Linux. Almost two years after Phoronix reported that there is a native Linux port of the CryEngine (Mike from Phoronix shared no source for this information, so Phoronix as usual are speculating), there might actually be a game now for our platform. That would be great news.

In my opinion, the goals are way too ambitious for the requested funding and from a developer without any track record as far as I can tell, but it is already successfully funded, so build your own opinion and watch the pitch video below. 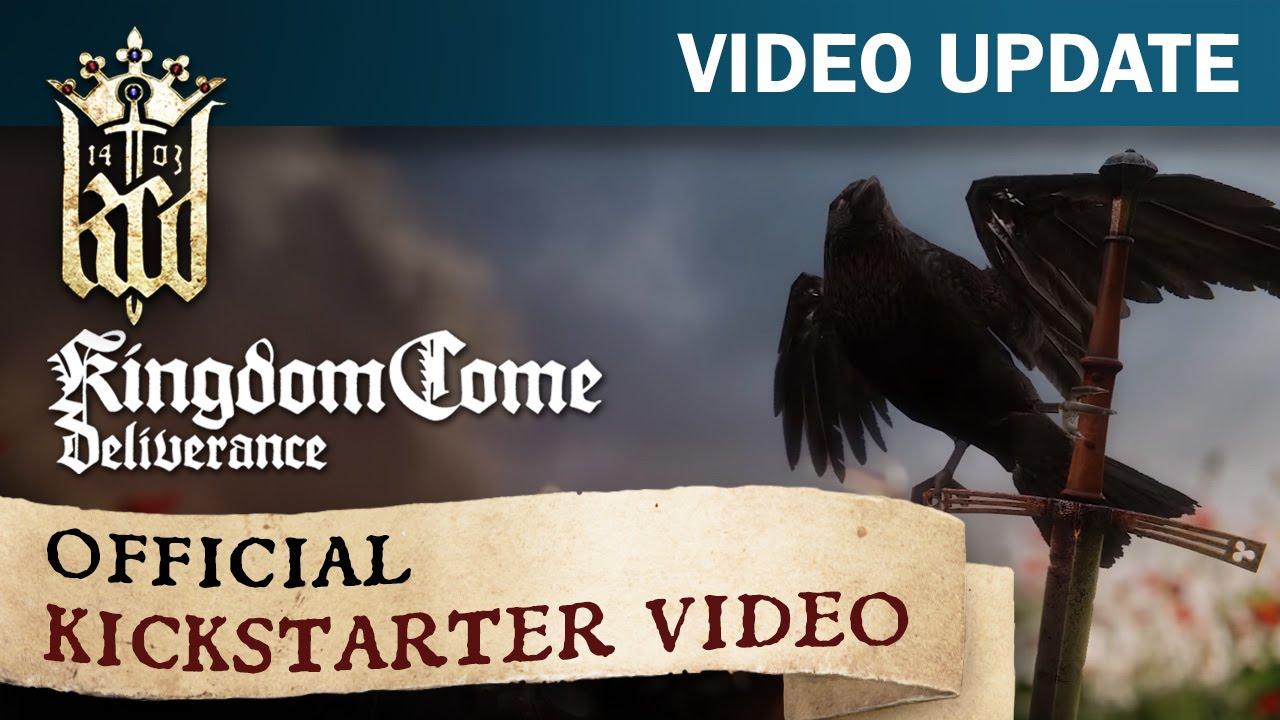 We do often include affiliate links to earn us some pennies. We are currently affiliated with GOG and Humble Store. See more here.
Some you may have missed, popular articles from the last month:
The comments on this article are closed.
25 comments
Page: 1/3»

View PC info
It's a new startup, so of course they haven't shipped a game yet. But each member on the team has experience at big companies building games I've at least heard of, if not played. They've been working on this game for almost 2 years.

If you listen to the whole pitch video, they make it clear that their relatively low goal was chosen as a reasonable sum in order to simply prove there is customer interest in the game to their existing investor, who would then continue to fund development just as he has for the past couple years already.

I'd also like to point out that they clearly will offer a refund on the Kickstarter page in the event that they don't ship the game on your chosen platform, which is Linux for me. I fully intend to take them up on that if they fail to bring it.
0 Likes

If you watch/read everything they say that the 300k pounds are not really to fund the game, but to prove to their investor that people are interested in the project. They also talk about their past experience.

Edit: I took too much time to write this :P
0 Likes
manny 24 Jan, 2014
They might become the star citizen of medieval :D! this is only 10% and their total budget and they reached that in just 36 hours !!

, hopefully they will reach at least 50%

"Our investor is strong and capable of funding the complete development of our project. But he does not follow the game industry very closely, and needs proof that publishers and marketers are wrong about our game - that you are indeed interested in a mature, medieval RPG that emphasizes freedom and authenticity. And so we stand, as a studio, at a crossroads. Either those naysayers are right, and there truly is no desire for the game we are making, or we are right. Either way, we think Kickstarter is a great way to find out.


The sum we are asking for is about ten percent of our total budget; for our investor, however, it is proof that there is real demand for the game, and that there is a point to keeping it funded. Every extra dollar will allow us to make the final product that much better because it means more money for development and more support from our investor.


Should our Kickstarter campaign fail, it will mean that we were wrong, that there is no interest to play a game with the atmosphere of Braveheart, and that we will have to start considering working on some mobile MMO, because that's where the money is these days (or so everybody tells us). We are, however, positive that our instincts are right."
0 Likes

crakkhead 24 Jan, 2014
Don't get me wrong, I hope they achieve all they set out to do. That'd be a damn great first game.
But they basically want to make a better Skyrim. That game cost $85 million (incl. marketing) [1]. So even if this is only 1% of what their investor will give them, they are still short. I know that it's not gonna be as big as Skyrim, but 30 hours of gameplay is no small feat either.

They also say they are 35 people at the moment, planning on doubling that number. For comparison Wasteland 2, Torment: ToN and Project Eternity all made over $3 million and have a team of 20-30 people working on those projects. Granted, wages are probably lower in the Czech Republic than in California. Also for comparison Skyrim had 90 people working on it with an experienced team, an engine they already knew, no money problems whatsoever and it still didn't turn out that great, IMHO, but that's just me.

Anyways, let me reiterate. I really would like to see them succeed because it sounds like a great game and it'd be great for Linux, but I remain skeptical. Again this is just my opinion. No ambitions for world domination here.
0 Likes

Anyway I think they have very good graphists and they seem to know what they’re doing. They are not making a huge map like in Skyrim but a very small one. There’s probably gonna be much less side quests too. And hopefully they are more rigorous than Bethesda who are well known for releasing buggy games ;).
0 Likes

View PC info
Comparing a AAA to an indie isn't really fair. Even so, the budget of a game is not always an indicator of the quality of the game. Even in AAA land, there have been many games with massive budgets that sucked complete balls. $60mil for Too Human??? $20mil for Enter the Matrix?!? And whatever amount was pumped into Final Fantasy XIII. I don't even know what Bethesda blew $85mil on for Skyrim. I loved the game and all, but really?

As relates to Warhorse, they certainly don't need to try and get $85mil to make the game they want to make. Just because Bethesda spent that much doesn't mean that the only way to produce a game equal to or better than is to spend as much. The Witcher 2's budget, including marketing, is probably around half that of Skyrim. Just for example.
0 Likes

Quoting: Quote from crakkheadThat game cost $85 million (incl. marketing) [1]. So even if this is only 1% of what their investor will give them, they are still short.

Don't foget the difference in currency here. Their goal was 300k Britisch pond, which roughly equals 500k US dollars. If that is 10% their total budget is around 5 million dollars.

Still a long way from 85, but I guess the marketing for skyrim was insanely expensive with all the ads I've seen.

If they play it smart and make modding as easy (or even easier) as skyrim, they could end up with a big collection of user generated content. A large part of that will be of less than optimal quality, but there are always a few real treasures to be found.
0 Likes

Sabun 24 Jan, 2014
View PC info
I'll be honest, I don't believe in the Linux port until I see it. If Crytek won't officially announce Linux compatibility, then I refuse to believe there is any. If Kingdom Come really does end up on Linux, that would be awesome. Until then, I will remain skeptical.

Why remain skeptical on the Linux support? As they've said, this is just to show that there's interest for their investor(s). The money will be refunded in the event of no support, which is very smart. This means they don't have to support Linux, just say that they will and suddenly create additional hype and interest that they don't have to atone for later on (just simply throw out refunds).
0 Likes

Quoting: Quote from SabunI'll be honest, I don't believe in the Linux port until I see it. If Crytek won't officially announce Linux compatibility, then I refuse to believe there is any. If Kingdom Come really does end up on Linux, that would be awesome. Until then, I will remain skeptical.

Why remain skeptical on the Linux support? As they've said, this is just to show that there's interest for their investor(s). The money will be refunded in the event of no support, which is very smart. This means they don't have to support Linux, just say that they will and suddenly create additional hype and interest that they don't have to atone for later on (just simply throw out refunds).

I asked Warhorse about this, here is the exchange(Linux part, I asked other questions as well):

"2. To my knowledge CryEngine doesn't officially support Linux, has this changed or are you gonna port it yourselves?"

View PC info
They've already hit their goal and because of that; I'm a backer.
0 Likes
1/3»
While you're here, please consider supporting GamingOnLinux on: