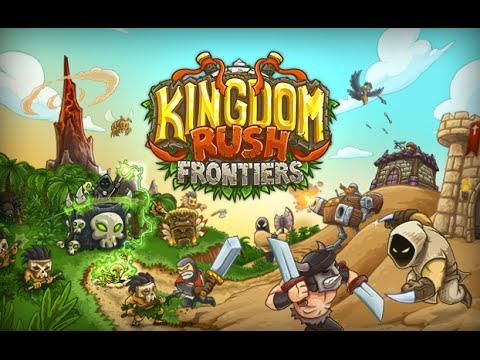 Speaking on their forum they said this:


QuoteLinux will be included in a free update after launch. I forgot to mention that. My bad.


I still haven't even played Kingdom Rush even though it was ported to Linux two years ago, yes it has been that long I even had to check. Am I missing something big here?

About the game (Official)
The world's most devilishly addictive defense game is back - welcome to Kingdom Rush: Frontiers!

Bigger and badder than ever before, Kingdom Rush: Frontiers is a whole new level of the furiously fast, enchantingly charming gameplay that made the original title an award-winning hit. Command your troops through an epic (mis)adventure as you defend exotic lands from dragons, man-eating plants, and ghastly denizens of the underworld -all with flashy new towers, levels, heroes, and more goodies to help you crush your foes to a pulp. (Don't worry, we've still got all the good ol' stuff from the last game, too. It's vintage now.)

Kingdom Rush: Frontiers packs in so much content, it's like a fully upgraded artillery blast of mouthwatering, pixelated joy launched right into your smiling little face... and it hurts so good! Article taken from GamingOnLinux.com.
Tags: Steam, Strategy, Tower Defense, Upcoming
0 Likes
We do often include affiliate links to earn us some pennies. We are currently affiliated with GOG and Humble Store. See more here.
About the author - Liam Dawe

lvlark 18 Jul, 2016
View PC info
I've only played the free web version of Kingdom Rush over on Kongregate. I've played a bunch of TD games there, this one probably ranks second for me, after Cursed Treasure. One or two wonky bits, but overall it's pretty solid.
1 Likes, Who?

Quoting: lvlarkI've only played the free web version of Kingdom Rush over on Kongregate. I've played a bunch of TD games there, this one probably ranks second for me, after Cursed Treasure. One or two wonky bits, but overall it's pretty solid.

Yep, I'd agree with that. One of the best TD games I've ever played, second only to the awesome Defender's Quest: Valley of the Forgotten (which combines a bit of RPG, so it's not an entirely fair comparison, but still).
0 Likes

Janne 18 Jul, 2016
View PC info
The original Kingdom Rush is great. Have it on both Linux and Android, and I've replayed it any number of times. Frontiers, on the other hand, feels like a warmed-up rehash with bad game balance and very uneven level quality. It's as if they gave the original game code to a group of summer interns and asked them to make a sequel.

Get the original; it's great. But don't bother with this one.
0 Likes
Purple Library Guy 18 Jul, 2016
Frontiers . . . every time someone mentions that word I get reminded of this Star Trek joke:
How many ears does Mr. Spock have?
Three. One on the left, one on the right, and the final, front ear.
0 Likes

Awesome, Kingdom Rush is an excellent tower defence game and I’ll certainly buy Frontiers too. My only issue with KR is I haven’t been able to finish it :-/ (too hard near the end).

And it’s much better than Defender’s Quest ;). After all the hype around DQ I was disappointed… There is little challenge and a lot of grind and cutscenes.
0 Likes

boltronics 19 Jul, 2016
View PC info
OMG.. this is a day one purchase for me. I've got almost every star on the Android version, and have every achievement for the GNU/Linux one. Great little tower defense game.

QuoteI still haven't even played Kingdom Rush even though it was ported to Linux two years ago, yes it has been that long I even had to check. Am I missing something big here?

A lot! It is super fun, I spent like 50 hours playing this one and I don't even like tower defense games :P

Quoting: boltronicsOMG.. this is a day one purchase for me. I've got almost every star on the Android version, and have every achievement for the GNU/Linux one. Great little tower defense game.


Well, they have three Kingdom Rush titles for mobiles and browsers, among which the first one is also available on desktop platforms, while the second one is also coming, as you can see.

They are also working on a new title, Iron Marines: https://www.youtube.com/watch?v=A9n4hwMdWMQ
0 Likes
Sammaster 19 Jul, 2016
The best TD game ever is Bloons TD 5 by far.
Kingdom Rush is not a classic TD, as the enemies can attack you as well.
First Cursed treasure was mediocre, the second was great.
0 Likes

View PC info
I've to agree Kingdom Rush is super fun.
However super hard too - at least for me.

Definitely buying Frontiers when it is released to Linux.

BTW, IIRC they said you can apply for becoming beta testers somewhere on their forums.
0 Likes

Quoting: SammasterKingdom Rush is not a classic TD, as the enemies can attack you as well.

Well they attack the hero and the reinforcements, but not the towers. I don’t like TD games where you have to rebuild your towers at all, so it’s a good thing. (I also don’t like the "hero" concept but you can just put it at the end and forget about it, more or less.)
0 Likes
1/2»
While you're here, please consider supporting GamingOnLinux on: