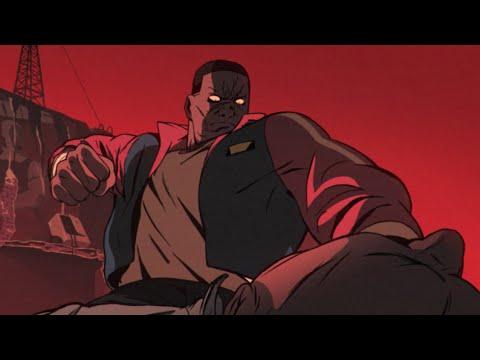 YouTube videos require cookies, you must accept their cookies to view. View cookie preferences.
Accept Cookies & Show   Direct Link
Mother Russia Bleeds is a rather violent beat 'em up that's now available day-1 for Linux. My friends at GOG sent over a key, so here's what I think.

Issues
First thing: If you have more than one monitor, it may start on the wrong one. Putting it in a window, dragging it over and setting it back to full-screen works fine though.

I highly suggested using a gamepad for this, as the keyboard controls are quite bad. I accidentally tried changing the "Select" keybind which was set as left-ALT, but it wouldn't let me re-use that key. The keybindings section of the options doesn't actually detect all the keys, which is annoying.

I wasn't able to actually get into a game using the keyboard, as there's no prompts. First impressions weren't good while using a keyboard.

Thankfully, SC Controller exists. Once I popped my Steam Controller into Xbox Controller mode all was dandy.

Gameplay
The game itself is damn, extremely brutal. You can throw an enemy down, get on top and repeatedly punch them in the face – savage.

The game is very much intended to shock you, and I do suggest doing the brief tutorial as it sets up how you came to be in this room where people in hazard suits give you injections. What's in the syringes? I don't have a clue, but it's glowing so that cannot be good.

You're actually able to use the syringe my character seemed to store in his pants on fallen twitching corpses to suck out this vital drug you need, it's totally gross and plays into the shock value of the game completely. The drug can either heal you, or make you incredible strong to be able to tear someone in half with a power attack. Terribly grim and awesome each time.

The drug seems to be having a rather adverse affect on my character, as he freaks out and throws up at times. I should probably send him to rehab once I'm finished kicking ass.

The game brings out some real classic gameplay from old gems like Streets of Rage, like being able to hit multiple enemies in a line with a kick in the air, to picking up weapons like a bat or a fire extinguisher.

I absolutely love the combinations of attacks you can achieve, from a dash and sliding kick, to grabbing someone and 'using my head'.

If you're not easily shocked, it's actually quite a good beat 'em up. I've been stabbed, had glass smashed in my face, pushed to the floor and punched repeatedly and damn it's a solidly good game. Obvious issues with the keyboard, but who wants to play this type of game with anything other than a gamepad?

Mother Russia Bleeds feels extremely fresh in a world where we are getting a flood of games.

We do often include affiliate links to earn us some pennies. We are currently affiliated with GOG and Humble Store. See more here.
About the author - Liam Dawe
I am the owner of GamingOnLinux. After discovering Linux back in the days of Mandrake in 2003, I constantly came back to check on the progress of Linux until Ubuntu appeared on the scene and it helped me to really love it. You can reach me easily by emailing GamingOnLinux directly.
See more from me
Some you may have missed, popular articles from the last month:
The comments on this article are closed.
8 comments
JudasIscariot 5 Sep, 2016
View PC info
There are prompts for the keyboard as I watched one of our testers test the game. Perhaps the keyboard prompts are missing in the Linux version, then?

I wouldn't know as I've only played the game with a controller :)
0 Likes

Ahh OK, I thought you were referring to the prompts you get while playing the game. My bad.


Also, Liam, you know that the game has this mechanic where you can press and hold the button for punching to charge it up, right? Well, you can use that while you're beating up a dude while he's down...brains errywhere!

Well, obv. If it was about male menstruation that would just be weird.
0 Likes
posmunk 7 Sep, 2016

View PC info
Coincidentally, I just uploaded 2 videos with some gameplay if anyone is interested in taking a look in how it plays:

(Also, go ahead and check my full playlist if you want)
0 Likes