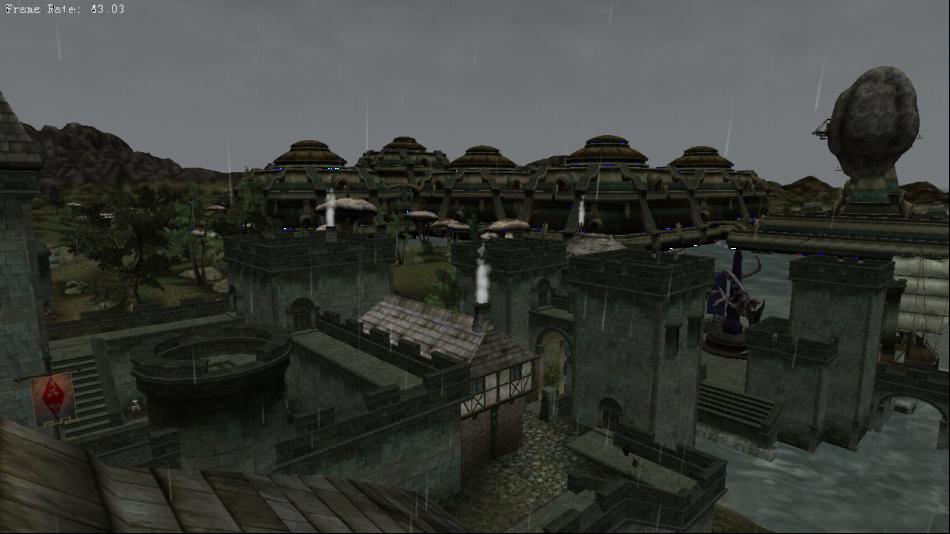 One thing I totally forgot to write about is that in the next release of OpenMW, the open source game engine for Morrowind, will finally have the 'Distant terrain' feature.

Distant terrain is one of the features missed from all the previous releases, so I am looking forward to the next stable release. Exactly as the name might suggest, it allows you to see a lot further which in a game like this really will help immersion.

You can grab Morrowind from GOG, install it with Wine and then point OpenMW to the data files. One of the few times I personally consider it acceptable to buy a Windows game, since it's being used to play with an open source engine.

If you've been on the fence about OpenMW, don't be, it's impressive. I actually tried OpenMW today and I was really impressed by how buttery smooth and complete the experience feels right now. I've been told you can actually play Morrowind through to completion on OpenMW which is fantastic. Article taken from GamingOnLinux.com.
Tags: Game Engine, Open Source
8 Likes , Who?
Share

View PC info
I think OpenMW is one of the best open-source game projects out there.

It has so much potential and seems so extensible. I even saw someone loading Skyrim worldspaces in OpenMW :))

I don't really have any interest playing Morrowind in OpenMW (I'm kinda hyped for Skywind tho) but I sure hope that it will eventually be forked to create completely new games - instead of being just a rewrite of an existing game.

Or as an engine for mods like Nehrim, Endereal or whatever - that create a completely new game and use TES games engines.
Or even Skywind, why not (I would would be so happy) - if someone makes it compatible with Skyrim data files.

This, however, will require much improved graphic capabilities.

dmantione 10 Apr, 2017
View PC info
... and Morrowind is by far the better game compared to its successors. Yes, Oblivion and Skyrim are not on Linux, but Morrowind is, and you can play it like nobody did before. Combined with some other community upgrades (which OpenMW supports in an excellent way), it is fantastic.
0 Likes

View PC info
I will add that openmw is in the Ubuntu repos, and it's the best way to get the stable version. It's been updated twice since I installed it.

I agree that Morrowind is a superior game; I don't know if it's better than Oblivion or Skyrim, but it's one fine, fine game, with at least as much complexity as any RPG you've ever played.

BTW, I installed the complete Morrowind from disc when I installed openmw, and openmw found the Morrowind installation without my having to tell it where to look.

As for the installation, innoextract should do the job if you get it from GOG, no need for Wine.
3 Likes, Who?

As for the installation, innoextract should do the job if you get it from GOG, no need for Wine.

That is good to read. I didn't know this, i will be sure to try this way when I get Morrowind since I prefer to buy DRM-free Windows only games.
0 Likes

View PC info
People claim Morrowind is a better game than its successors, however I'd say it depends on what you're looking for in a game.

There's articles on the web which go into greater detail, suffice it to say people have opinions.
0 Likes

Quoting: rafebelmontThat is good to read. I didn't know this, i will be sure to try this way when I get Morrowind since I prefer to buy DRM-free Windows only games.

FYI: It is DRM free on Steam as well. You can install it then on Linux with steamcmd.

Buy it on sale at the cheapest place you can find, no need to reward Bethessa for not supporting Linux.

Quoting: rafebelmontThat is good to read. I didn't know this, i will be sure to try this way when I get Morrowind since I prefer to buy DRM-free Windows only games.

FYI: It is DRM free on Steam as well. You can install it then on Linux with steamcmd.

Buy it on sale at the cheapest place you can find, no need to reward Bethessa for not supporting Linux.

Thanks for that. Is there a way to see if a game on Steam is DRM-free? I usually only buy games on sale these days, you see, I would buy more often for the full price (not Bethesda games anyway), but having a baby at home with a low budget does not allow it :)
0 Likes

nadrolinux 10 Apr, 2017
View PC info
I can confirm that you can complete main campaign, Tribunal, Bloodmoon and a lot of side quests without any problems. I didn't notice any problems with any quest I played (I finished a lot of them, I have a highest rank in a lot of fractions). For me OpenMW is even better than an original version, because is much more stable and what is the most important for me in this case... has native support for Linux :P
1 Likes, Who?
ssj17vegeta 10 Apr, 2017
Oh. My. God. Absolutely can't wait !! :D
0 Likes
1/2»
While you're here, please consider supporting GamingOnLinux on: