Planet Nomads drops plans to have co-op and multiplayer 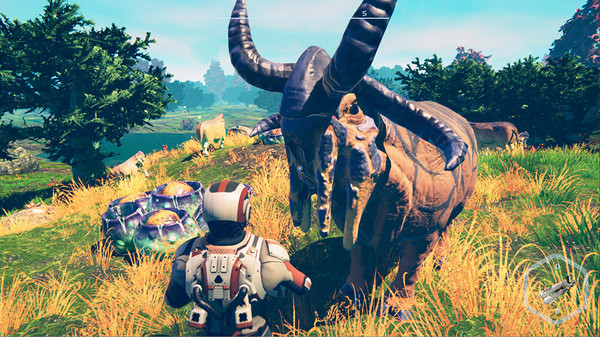 The Early Access sandbox game Planet Nomads [Official Site] has officially dropped plans to include any kind of co-op or multiplayer.

A massive shame, as these sandbox games really do end up boring by yourself. Unless they make the game somehow incredibly good, this move may not go down well with their Kickstarter backers and Early Access buyers. In fact, negative reviews for this are already starting to appear.

They wrote in a post on their official site, which does give some valid reasons. The part that bothers me here is that they did promise it, seemingly without thinking on how difficult it would be. I mean, did they really think implementing proper multiplayer wouldn't be difficult? Here's what they said:

It's about time we stopped contemplating and constantly discussing whether or not to start adding multiplayer. A decision had to be made and has been made. Planet Nomads is not going to have multiplayer or CO-OP game modes. Our focus is going to be 100% dedicated to making an immersive singleplayer sandbox game that's both giving a huge amount of creative freedom and plenty of things to explore and discover, as well as a sense of direction towards a higher goal. We apologize to our Kickstarter backers and preorder Nomads who backed Planet Nomads purely for the multiplayer aspect of it. Here's a more detailed explanation for our decision.

In the more detailed link, it really just reads like like they're saying "It's more work than we planned for.". It might sound like I'm being particularly harsh, but that is basically the reality of what they're saying.

They haven't posted about this on Steam directly yet, I imagine as it would cause an even bigger backlash due to more people seeing it and taking note of it.

I'm not writing the game off completely, since it could end up being a good game. However, now it won't have any multiplayer at all, it's essentially become "yet another survival game" that's in Early Access. Their roadmap doesn't particularly sound all that great either. Planet customization, optimizations, quests (very difficult to make quests actually fun) and monuments.

Still, since they can fully focus on the game being singleplayer only, they might surprise us with having more breathing room to make it a great experience. Last thing we need is another ARK.

Thanks to Marcelo in our Telegram Group for the tip!

Article taken from GamingOnLinux.com.
Tags: Editorial, Indie Game, Sandbox, Steam, Survival
5 Likes, Who?
We do often include affiliate links to earn us some pennies. We are currently affiliated with GOG, Humble Store and Paradox Interactive. See more here.
About the author - Liam Dawe

View PC info
Another posibility of becoming popular is abandoned. Now i dont see any future for PN. Game already has boring to death crafting mechanics.
And single player will make it more.
2 Likes, Who?

View PC info
Wow, and I had plans to play it with my friends.. glad I didn't purchase it.
1 Likes, Who?

View PC info
Oh shit - I purchased it solely for the coop aspect of it. I was about to get my colleagues to get it too, as a scifi alternative to the fantastic 7 Days To Die (who has excellent coop). How n00b a developer are you when you promise things you totally lack experience in implementing?!

So... Not only should I stop funding kickstarter projects (I never do anymore), now early access is out of the question too.
0 Likes

View PC info
That's irritating. I am quite liking this game but was hoping to play it with friends...
0 Likes

But to promise multiplayer as a stretch goal is just completely beyond amateurish.
Every developer worth his money knows that multiplayer is a framework decision, not something you can just "add" later on.
Doesn't exactly inspire confidence in the developer in this case.

View PC info
I guess I'm a little bit disappointed about this news. I have been watching Planet Nomads, thinking it looks like the sort of game I'd like to play. The fact that it is now looking like it will only be single-player does not ruin the game completely for my enjoyment. I'd still play it single-player.

If this means it will turn into a fantastic single-player experience (by concentrating on the game balance and content) then that would be great.
2 Likes, Who?