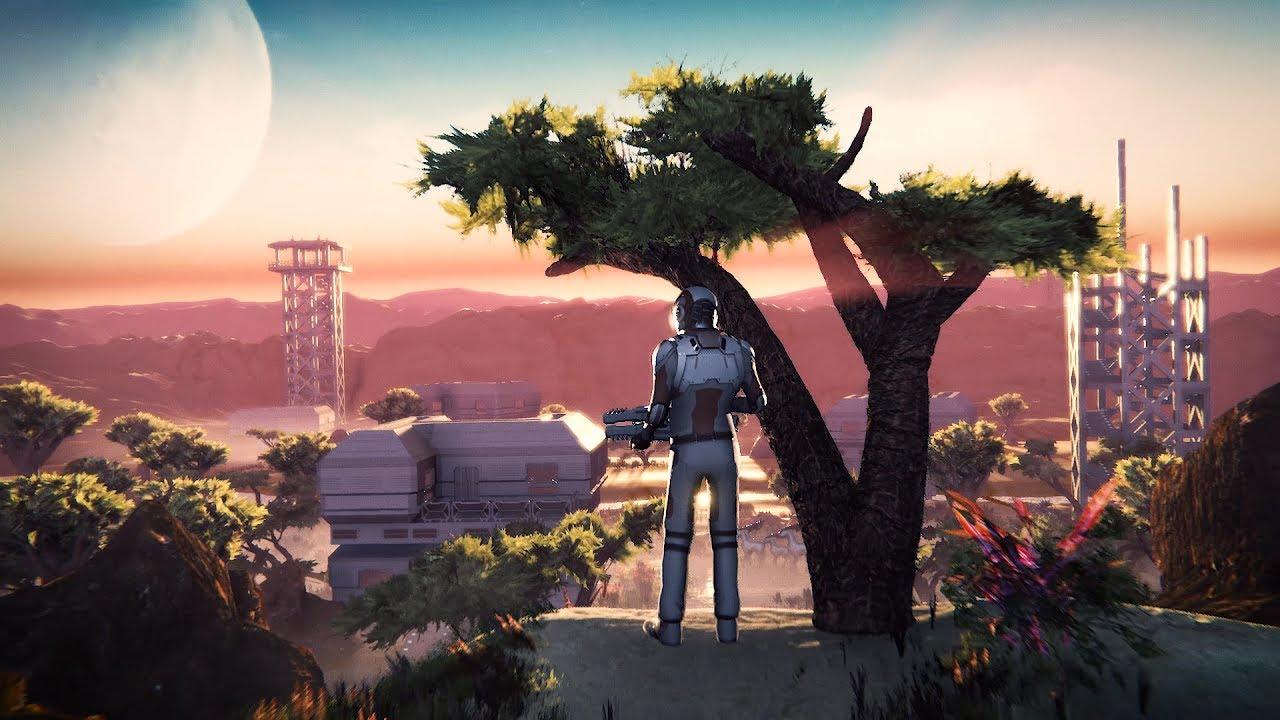 Planet Nomads is a survival game taking inspiration from many others. The resource gathering is very much like No Man's Sky, incredibly similar in fact to the point that it really does feel like I'm playing it. The game features both a survival mode, where you're battling the elements for survival and also a creative mode to play around as you see fit.

The survival mode gave me a pretty decent impression, even if performance isn't great right now. It starts off with you in some kind of pod falling towards the planet and an inevitable hard landing. Once out, you're now greeted with some small starting hints to help you get some of the basics.

There's animals too, it's not just about mining resources. One I constantly come across looks a little like a space Turkey. I find them everywhere, crazy little critters. They're a damn menace too, they spit some weird crap at you and bounce like they're made out of Flubber, they bounce so much they're near impossible to actually hit, which is a problem early on.

It's changed a lot since the earlier builds and it looks like it's really starting to come together nicely. As it stand right now, it's still quite basic, but a good start. It sure does look beautiful as they have the graphical style nailed down near perfectly, but it has that dreaded empty survival game feeling, where it feels like there just isn't all that much to see and do. Sure you can spend hours grinding resources, building a house and a vehicle, do a little exploring, but then what?

I do get the feeling of "yet another survival game" even if their future plans for it are grand, right now the genre has a lot of titles, some good, some terrible and this sits somewhere in the middle.

I don't mean to put a downer on their new release that we've been waiting on for some time, but those are my honest thoughts on it as it stands right now. It's not a bad game, far from it, just needs a lot more of everything right now.

It's available now in Early Access, with 10% off on both Steam & GOG. Article taken from GamingOnLinux.com.
Tags: Early Access, GOG, Initial Thoughts, Sandbox, Steam, Survival, Planet Nomads
7 Likes, Who?
We do often include affiliate links to earn us some pennies. We are currently affiliated with GOG, Humble Store and Paradox Interactive. See more here.
About the author - Liam Dawe

View PC info
Like you say, the game isnt running that great atm.

And I was hoping for a better frame rate at release. This game ran horrible on my PC, 11-20fps isnt cool, stutter and lag. Ended up refunding it because of that. As the game progresses in development i will probably give it another go.

Its really got some nomad skys wibes to it aswell ^^

View PC info
Well, I've been meaning to get on board with this. Purchased.
0 Likes

View PC info
Ok, so it runs ok. Not well (underwhelming for a 970) but it's good enough for now. It really looks very No Mans Sky esque. It's great to have a game like this on Linux, and I'm very excited to try the spaceships later

ZeloxLike you say, the game isnt running that great atm.

And I was hoping for a better frame rate at release.

Yeah performance is abysmal for me with anything but lowest settings (RX480). Looks like it's using Unity 5.4.2f2, so it's OpenGL only (no Vulkan yet). Hopefully they'll switch to Vulkan at some point (for which they need Unity 5.6).

ShmerlYeah performance is abysmal for me with anything but lowest settings (RX480). Looks like it's using Unity 5.4.2f2, so it's OpenGL only (no Vulkan yet). Hopefully they'll switch to Vulkan at some point (for which they need Unity 5.6).

OpenGL or not, that's not normal. A lot of games on GNU\Linux works fine enough (10% FPS drop from Windows counterpart is acceptable IMO).
0 Likes

View PC info
@Areso: I suppose it's not. But Unity with OpenGL really isn't optimized for heavy graphics.
0 Likes

Yep, the issue, for me, is that many of them stays forever in Early Access or suddenly drops to Release, and then... nothing. They are buggy or very uncomplete or lack players for multi or interest for solo.

Also i hate the balance of most of them, and the lack of ecology concern : destroy a forest to build a shelter, dig a mountain to build a fireplace. Eat meat to stay healthy because veggies are not enough...