Terraria Still Planned For Linux, Due After The 1.3 Release 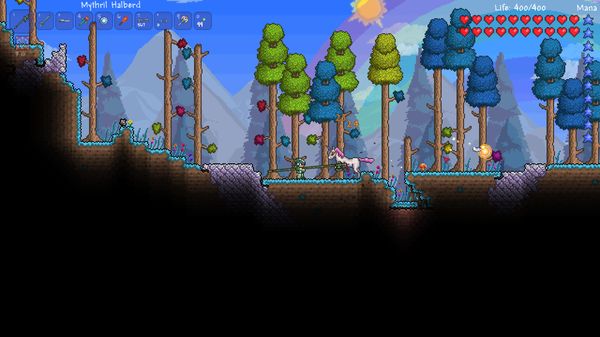 The developers of Terraria have recently commented on a reddit post, and they mentioned Linux is still planned for the game.

It’s exciting news, as it’s a game I’ve always wanted to properly try, and now I should get the chance. We already knew they were planning it, but they went quiet about it until now.

QuoteJust to add to this, and reiterate what /u/Shadow1591 said, it is very much something we're planning for, or shortly after the release of 1.3. We definitely take both Mac and Linux gamers seriously. :)

I already have too many games!

About the game (Official)
Dig, Fight, Explore, Build: The very world is at your fingertips as you fight for survival, fortune, and glory. Will you delve deep into cavernous expanses in search of treasure and raw materials with which to craft ever-evolving gear, machinery, and aesthetics? Perhaps you will choose instead to seek out ever-greater foes to test your mettle in combat? Maybe you will decide to construct your own city to house the host of mysterious allies you may encounter along your travels? Article taken from GamingOnLinux.com.
Tags: Adventure, Sandbox, Steam, Upcoming
0 Likes
We do often include affiliate links to earn us some pennies. We are currently affiliated with GOG and Humble Store. See more here.
About the author - Liam Dawe

nifker 29 Apr, 2015
View PC info
Sounds nice but I still enjoyed Starbound more sadly I wasn't able use my savegame anymore because of the 1.0 update
1 Likes, Who?

View PC info
Apples & Oranges.
My girl and me have over 1,000 hours in Terraria and we tried Starbound and wanted to puke. Each game is very different, one is about collecting and stealing things and the other is about building.

I've been watching my RSS feed for Terraria news on Linux all year. So nice to see this on GOL - Terraria 1.3 is going to be amazing :) (No More Wine + SSH Tunnel to play with .NET + XNA - it was such a nightmare)

Finally after gifting people 8 copies of this game I'll be able to play since Windows has RIP 1+ year and we're rocking Arch.
1 Likes, Who?

View PC info
I really hope it comes out this summer, with a Linux server too! Playing MP under Wine is annoying, and trying to run a server has been impossible for me (though some claim they can do it).
0 Likes

View PC info
I've actually held off on buying this when it kept being on sale because of the promise it would be coming to The Penguin.
0 Likes

View PC info
Terraria has been in my collection since 2011 so a couple more months waiting isn't going to be any great hardship.
0 Likes

1.3 is supposed to come out in June, so after that.

And yet the developers were previously saying it would be made available with the 1.3 update... They even showed a video of Terraria running on Ubuntu and as I recall, they claimed that "just about everything" worked (paraphrasing there).

1.3 is supposed to come out in June, so after that.

And yet the developers were previously saying it would be made available with the 1.3 update... They even showed a video of Terraria running on Ubuntu and as I recall, they claimed that "just about everything" worked (paraphrasing there).

I'll believe it when it happens... Until then, my money will stay in my bank account.

Just to be clear, he did say it was planned for, or shortly after the 1.3 update. So it may still be with 1.3.
0 Likes
1/2»
While you're here, please consider supporting GamingOnLinux on: