The massive 0.5 release of Lutris is out with a revamped UI, GOG support and tons more

Regular readers will know by now how much I've enjoyed using Lutris to bring together my game library across Steam, GOG and more. It just recently put out the big update!

There's something so satisfying about having all games on your system, under one roof regardless of where you purchased them. It's the anti-launcher of launchers and it's slick. 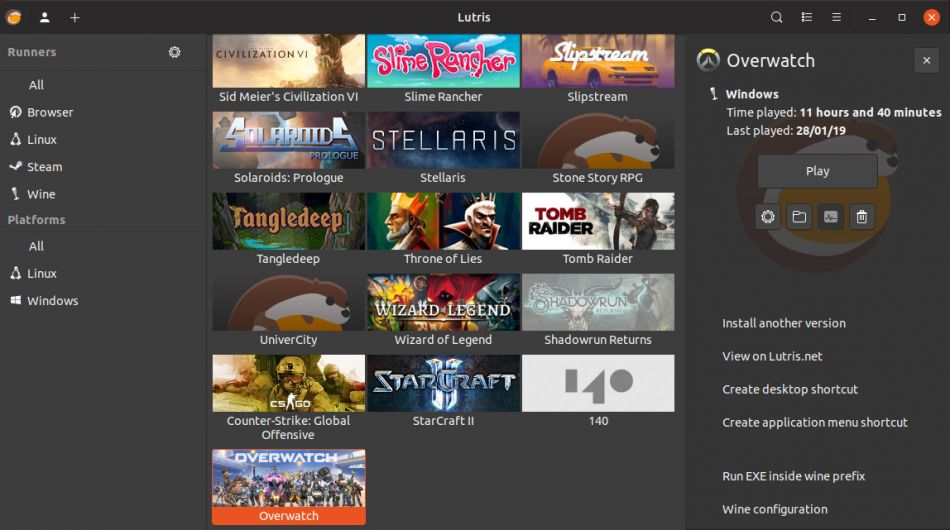 It's crazy really how long GOG have dragged their feet on getting Galaxy on Linux, so Lutris should help a lot there for those who do shop across different stores. Personally, it's made me more likely to purchase from GOG as keeping tabs on manual downloads is a hassle I don't want.

Article taken from GamingOnLinux.com.
Tags: Apps, Open Source
32 Likes, Who?
We do often include affiliate links to earn us some pennies. We are currently affiliated with GOG and Humble Store. See more here.
About the author - Liam Dawe

View PC info
I tried to install a Gog game with Lutris, works very well.
Lutris became a "must to have" for Linux gamers with this new major version.
6 Likes, Who?

View PC info
I've had a secret love affair with Lutris for over a year now, and I've been eagerly waiting for the 0.5 release. I love the new website so far, and there seems to be a download option for all of the most popular distributions. Like you, Liam, I avoid installing GoG games because I don't like having to manually manage them.

I've followed the FAQ and found where to "import" my GoG games, and I get a notification saying that they're imported... but I can't seem to find where to actually install them. Suggestions?
1 Likes, Who?
QUASAR 3 Feb, 2019

Can't say I'm that much of a fan of the idea that turning the sidebar off means both sidebars vanish. I'd like to be able to turn the one on the right off and just have it show when I need it, but the only options are all or nothing.

Edit: I'm getting some weird behaviour where the right sidebar will be replaced by some sort of ferret logo, with no obvious way to get back the previous menu that was there. Also, I was playing Caves of Qud and it didn't recognize when I quit the game. Ended up having to restart Lutris to restore normal functionality.

View PC info
This is great to see the gog support since gog won't give us a client.
6 Likes, Who?

View PC info
Does it have Humble Store support?

For games that are DRM free downloads from there. Admittedly, many give only a steam key, but it would be a nice thing to have direct download support for those that it is available.
5 Likes, Who?

That indeed would be even more important than the GOG integration, as the 'support' from Humble regarding downloads etc. is (IMHO) abysmal. But as they don't even have a common system for installations that is probably not going to happen....
2 Likes, Who?

View PC info
Anyone have this running on KDE, complains of no "Gnome-desktop available" for me.

Seems it's a bug

Quoting: pete910Anyone have this running on KDE, complains of no "Gnome-desktop available" for me.

Seems it's a bug

Can confirm with i3 its the same.
0 Likes

As soon as Lutris will show all my Steam games, it could be interesting, but it shows only the installed ones :-(