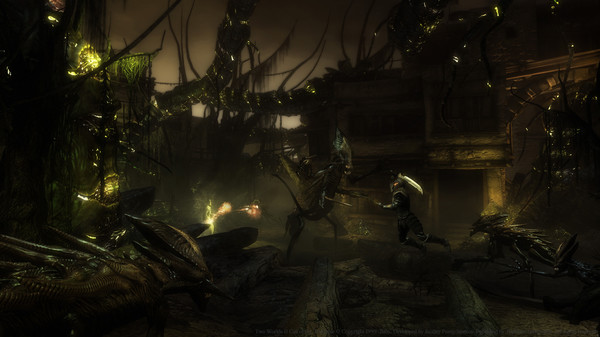 Two Worlds II Call of the Tenebrae is a new DLC & Standalone game coming to Two Worlds II along with full Linux support, but sadly the release date has slipped for everyone. They also seem to be having issues with the Linux version.

From the Steam forum here:

Quoteyes. we changed the release date to 15th of June. We need more compatibility testing. changes from CoT conflict with the main game.

And this one too:

Quote[…]We have trouble with Linux and Mac versions. Of course we will solve it somehow, but there are issues with the larger texture size.

Hopefully it won't be delayed once again, but I would rather we had a good release than a bug ridden mess like previous releases.

The developer also confirmed again they will be moving away from their old DRM method, to a less annoying "DLM". Where you don't need to enter in a key to activate anything. They will still give you a key, to access multiplayer and get back lost games if you purchased from other stores, as the key is your proof of ownership. A much better system overall.

Thanks for the tip DamonLinuxPL.

Article taken from GamingOnLinux.com.
Tags: Action, Delayed, RPG, Steam, Upcoming | Apps: Two Worlds II - Call of the Tenebrae
4 Likes, Who?
We do often include affiliate links to earn us some pennies. We are currently affiliated with GOG and Humble Store. See more here.
About the author - Liam Dawe

View PC info
Ugh.
Kinda sad. We just heard it was being released and now we get the delay.
Oh well, better they do release a proper game when they do.

View PC info
People don't seem to like the Two Worlds franchise, apparently. However, I think it's kind of admirable that they're being really gung-ho about porting these games to Linux and being functionally better. We shall see if the latter has any merit.
2 Likes, Who?

View PC info
They got a decent metascore. I'm so totally gonna support this release when released, presuming the Linux version runs properly.
1 Likes, Who?

View PC info
Two Worlds 2 is a really nice RPG, but you have to get over the first 1-2 hours. The beginning of the game is not too good, but then it turns into a open world with lots of places and stuff to discover.
0 Likes

View PC info
How interactive it is? I like talking to people (in games), but I don't like diablo-esque games, where everything is about combat. I like freeform character development system, where I am not limited by level and class. Everything close to strict C&L, especially with MUST HAVE party is boring, but everything closer to skill-system (especially with "repeat to gain mastery", instead of putting skillpoints) is better. Where does 2W2 stands in there?
1 Likes, Who?

Quoting: ColomboHow interactive it is? I like talking to people (in games), but I don't like diablo-esque games, where everything is about combat.

Of course combat takes a big part in the game, but you don't have to fight all the time. You can do quests either with combat, or stealth/stealing or with your talking skills.


Quoting: ColomboI like freeform character development system, where I am not limited by level and class. Everything close to strict C&L, especially with MUST HAVE party is boring, but everything closer to skill-system (especially with "repeat to gain mastery", instead of putting skillpoints) is better. Where does 2W2 stands in there?

The game uses skill points, but you can remove them for money at some points. I haven't played it for almost 3 years, so I can't remember every single detail, so it might be possible to gain skills with using them, but don't take this as granted.

For the question about a party, you don't have a party in single player. It's more like a Skyrim experience (without being that good). But the game has an online multiplayer where you can play in a party with others, build your own house and even a whole village.
0 Likes

Only to NPC.
0 Likes

Yeah, none of us like talking to people (in reality). We're Linux users and Gamers. That's like a double whammy as far as socializing with our fellow Earthlings.

I still maintain that the Ultimas (specifically 4 and 5) had the best NPC system. You didn't have any hints on what to say to people and had to actually talk/type to the NPCs. 6 was similar, but they had highlighted words suggested to say to people during conversations, then 7+ just had selection menus...

I can't think of any other games since those had any real interaction with NPCs.
1 Likes, Who?
1/2»
While you're here, please consider supporting GamingOnLinux on: