Verdun is yet another Unity title with broken fullscreen on Linux, here's a quick fix 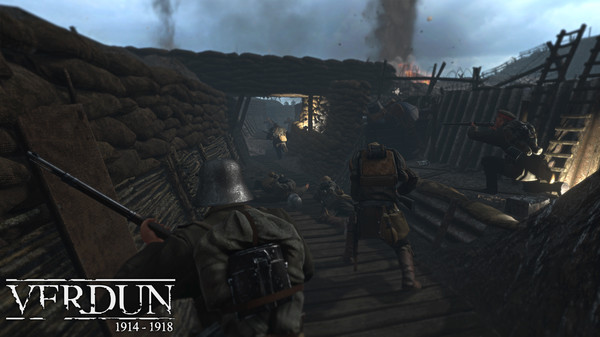 Sadly another game that updated to a version of Unity that had the fullscreen bug on Linux is Verdun [Steam], so here's a reminder of the quick fix.

Quite a few games recently stopped responding to any input when they're in full screen. Examples include Streets of Rogue, Ballistic Overkill, White Noise 2 and a few others. It's a bug in the Unity game engine, that was confirmed and fixed in subsequent releases.

Simply add this to your Steam launch option for the game:
-screen-fullscreen 0
This will then fix your input.

Don't know how? It's easy! Right click the game in your Steam library, go to Properties, hit "Set launch options..." and paste the above into it. It will set it into windowed mode, which seems to be the easiest way to fix it until developers update their games again.

Hopefully they will update their Unity version again in future, until then you will need to do that. Article taken from GamingOnLinux.com.
Tags: Action, FPS, HOWTO, Unity
2 Likes
Share

We do often include affiliate links to earn us some pennies. We are currently affiliated with GOG and Humble Store. See more here.
About the author - Liam Dawe
I am the owner of GamingOnLinux. After discovering Linux back in the days of Mandrake in 2003, I constantly came back to check on the progress of Linux until Ubuntu appeared on the scene and it helped me to really love it. You can reach me easily by emailing GamingOnLinux directly.
See more from me
Some you may have missed, popular articles from the last month:
The comments on this article are closed.
11 comments
Page: 1/2»
ravenmocker 11 Aug, 2017

I didn't know about this, I don't normally play in full screen
0 Likes
Disharmonic 11 Aug, 2017

View PC info
Unity should really get 1 Q&A employee to do at least some rudimentary testing on Linux. Some of the bugs that slip through really make me wonder if they test at all. It seems to me that they use the devs as beta testers.

Quoting: DisharmonicUnity should really get 1 Q&A employee to do at least some rudimentary testing on Linux. Some of the bugs that slip through really make me wonder if they test at all. It seems to me that they use the devs as beta testers.

They probably do. That's the problem. These issues don't happen to everyone. This particular problem never occurred on my machine.
0 Likes

View PC info
With "-screen-fullscreen 0" option the game resets all my settings including controls for some reason. But with -show-screen-selector (and choosing the windowed mode) instead everything is ok.
0 Likes

View PC info
I decided to install Verdun for myself. Well.. it's only 5GB install. To find out if this problem happens for me as well.

Yes, it did. Added the  -screen-fullscreen 0  modifier to the Launch options, and after that the mouse buttons were responding when clicking on Menu options.

Thanks for sharing. Hope the Unity people fix it soon!
0 Likes

It has been fixed for a while now, devs must just upgrade their Unity versions.
1 Likes, Who?

View PC info
Is this a unity issue, or related to Steam? I haven't seen that problem ever on any of my unity games, but don't have Steam.
0 Likes

Quoting: PitIs this a unity issue, or related to Steam? I haven't seen that problem ever on any of my unity games, but don't have Steam.

Unity issue, but only with a specific unity version.
1 Likes, Who?

Developer of Verdun here. We use the latest version of Unity (2017.1.0p3) and this issue is still present there. Unity confirmed that this is now fixed and the fix is scheduled to land for 2017.1.0p4, I -think- this Unity patch will launch end this week.
For now please use the workaround listed above, rest assured that a fix will be available soon.

Mike
2 Likes, Who?
1/2»
While you're here, please consider supporting GamingOnLinux on: