This website makes use of cookies to enhance your browsing experience and provide additional functionality -> More info Deny Cookies - Allow Cookies
⨯ We're live now on Twitch!
⨯ Join us on our own very special Reddit: /r/Linuxers
The Witcher 3 in Wine
Page: «167/171»

PangaeaThat fight was horrible. Think I actually gave up on it after countless tries because Geralt kept dying in seconds from those very powerful and damaging "statues". It's possible this was much worse on NG+ though, and I've only played the expansions with that. Many other encounters were fine, but this one (plus one or two Ciri quests) were brutal

Yeah, I discovered that quest when traveling back to Beauclair from the Termes palace ruins (after exploring the crypts there to find grandmaster wolven gear diagrams), so I already got some background on the conflict between humans and elves that happened in that area in the past, so Extreme Cosplay fell right into the context I was just analyzing before that.

I'm not in NG+, but I'm using Death March so those statues are indeed very hard, since they teamed up pikemen with sorceresses and when they all attack together it's huge amount of damage. So not getting surrounded was the first priority. Using some bombs and evasion I managed to distract the pikemen enough to take them out gradually. Then I tried to stall sorceresses with Axii. It barely works on them, and they also have some kind of force shields similar to Quen. Felt bad about it, and wasn't sure if they were really machines, they felt quite alive. Probably one of the hardest fights in the game so far (may be besides for Eredin and the Toad prince).

PangaeaThe "boxing" encounter mentioned above was fun, and I wish there were more missions that could be solved peacefully.

At other times I wish it was possible to kill NPCs, but almost everyone is immortal.

I actually manage to avoid killing in some encounters, unless necessary in self defense. For example, I was exploring the Bastoy prison ruins, and that hooded woman turned into an Alp. I managed to get the treasure there without killing her, assuming she was just defending her territory. Axii works wonders.

Witcher 3 is on a 70% sale now on GOG, which is the highest it has been (often seen it 60% off). Witcher 1 and 2 are also on sale at 85% off. A great time to pick it up. Apparently it's a 5 year anniversary for the third game's release. Strange that I only started playing it a year ago or something, because before that it wasn't truly playable on Linux.
https://www.gog.com/promo/witcher_birthday

Yeah... Quite hard. Those 2 wizards are pretty powerful... If you don't keep moving, you become an easy target. You must get rid of them in the first place or else, you are literally toast.

Cool little read they put up on GOG. Especially agree with Skellige Isles being gorgeous. It's relaxing (until a horde of harpies attack you) to simply walk around there and enjoy the sights.


Excitement, longing, enthusiasm - we all felt them while waiting for the third part of the famous Witcher trilogy. Finishing it after 2 additional DLC’s and over 100 hours of gameplay left us with feelings of awe. Joining the famous witcher, Geralt of Rivia, on his search for Ciri, the Child of Destiny, has etched itself in our minds. Yet, it was also a very memorable experience for the game’s creators who spent almost 5 years of hard work developing it.

This is my story, not yours. You must let me finish telling it

One of the foundations of The Witcher 3: Wild Hunt's success was its brilliant script, based on the bestselling Andrzej Sapkowski novels. Marcin Blacha, Story Director at CD PROJEKT RED, remembers writing the game’s screenplay as quite a complex and demanding task:

- From the beginning, the biggest challenge was the conversion from one medium to another. Sapkowski’s prose paints the world and its heroes with contours that fuel the imagination of the reader who must then fill them on their own. This means every book reader has had a Geralt of his own, while we had to create a Witcher that all the gamers would find appealing.

Our Geralt had to be interactive, so that the players could lead his adventures in more than one way. Luckily, The Witcher 3 wasn’t the first game that confronted us with such challenges, as we already had some priceless experience from creating the first part of the series.

The other feature that makes The Witcher 3: Wild Hunt quite unique is its rich world filled with magical locations and characters that feel almost alive. A large part of this universe’s creation fell on the shoulders of Lucjan Więcek, Art Director at CD Projekt RED. When asked which part of The Witcher 3 world he finds especially appealing today, he answers:

- After much consideration, I think I would choose Skellige Isles. Mainly because of its beautiful, vast landscapes and fresh air. Spending a weekend in such a place would definitely have a great effect on my frame of mind. I particularly feel drawn into openness, both in the meaning of large spaces and the freedom of thought.

Also, I would definitely like to spend some time in White Orchard. The sounds of a crackling fireplace, nature, forests, and the running river… Who could want more in these times when we tend to cover everything with concrete?

Things used to be simple. Monsters were bad, humans were good

The Witcher 3’s quests are quite unlike others found in modern RPGs. They gave us a choice in both shaping the story of the game and the world surrounding our heroes. Mateusz Tomaszkiewicz, Quest Director at CD PROJEKT RED, has many fond memories from the time of the game’s development:

- I liked working on the prologue, set in White Orchard and Vizima - Vesemir’s character is one of my favorites and it was cool to “accompany” him for a while. Personal bonds between Geralt, Ciri, Yennefer, Vesemir, and other witchers were a very important part of the story, and I find them one of my favorite elements in The Witcher series.

I have some very cool memories about creating the so-called Uma’s quest. It was crafted by one of our designers, Dennis Zoetebier, with my help. I remember we had a lot of laughs when designing the boozing scene that included the three witchers. I can still recall one meeting with the Project Manager and the studio’s executive when we were playing this quest. The sound recording had just arrived, and we were laughing so loud while playing that from time to time people walking through the corridor peeked in to see what’s going on.

Wolves asleep amidst the trees. Bats all a-swaying in the breeze…

It’s been five years and we still hum the songs and themes from The Witcher 3: Wild Hunt under our breaths. We owe that to Marcin Przybyłowicz, one of the brilliant composers, who filled the game with a fantastic score. As he admits, some of the work had a pretty tight deadline that added some pressure:

- I remember working on the music for the Crookback Bog quest, and the dialog scene near the arras from which I started composing the score for this part of the game. We had one of the most challenging moments during the whole production back then, time was short and a milestone was looming on the horizon. The entire score for Ladies of the Woods was composed in only four hours!

Another important moment in terms of music was the development of the first gameplay trailer. It was the first time the score for The Witcher 3 would be heard in public, so we knew the first impression was very important. We worked over three weeks to make it happen, and in the end, over twelve different versions of that score were created.

The legend lives on…

So, five years have passed since the fateful release of The Witcher 3: Wild Hunt. Do creators still remember the feelings that followed them now, in May 2020? As Mateusz Tomaszkiewicz puts it:

- I remember I was a bit worn-out then. A few days before the premiere, I was on the game’s promotional tour in Asia, from which I returned tired and jetlagged. On the day of Witcher 3’s release, the thought of this title being finally completed and shipped to people around the world seemed a little surreal to me.

Marcin Blacha, on the other hand, remembers being quite calm on that day:

- I felt joy, pride, and was somewhat curious how the game would be received emotionally by gamers. I wasn’t really worried about the potential reception of The Witcher 3: Wild Hunt, I knew back then it was a good game.

Lucjan Więcek gets most emotional when he summarizes:

- I admit I was a little stressed by waiting for the final reception of the game on which I have worked for so long. I remember journalists, as well as gamers at expos, received The Witcher 3: Wild Hunt very warmly. Such reactions gave us hope for the game’s ultimate success, but still, the waiting game wore me down a little. I wanted to see the gamers' reactions and then finally go on a well-earned holiday.

The truth is, we all put our hearts into this project, well before anyone knew it would become such a huge success in 2015. That’s why I want to use this occasion to thank all the game creators for their hard work and the wonderful time we shared together. It still seems remarkable to me how we could’ve created something so huge with so few people. It was all possible thanks to their talents and a huge dose of devotion.

Emotional impact... I still get goosebumps looking at a picture like this and remembering what I felt. Such an amazing moment in the game, and CDPR handled it perfectly. Total silence. Geralt standing there, having finally found Ciri, staring across the room with a thousand thoughts crashing through his mind.

Vesemir, the finale, all the little moments, the game has so much, but this was the highlight <3 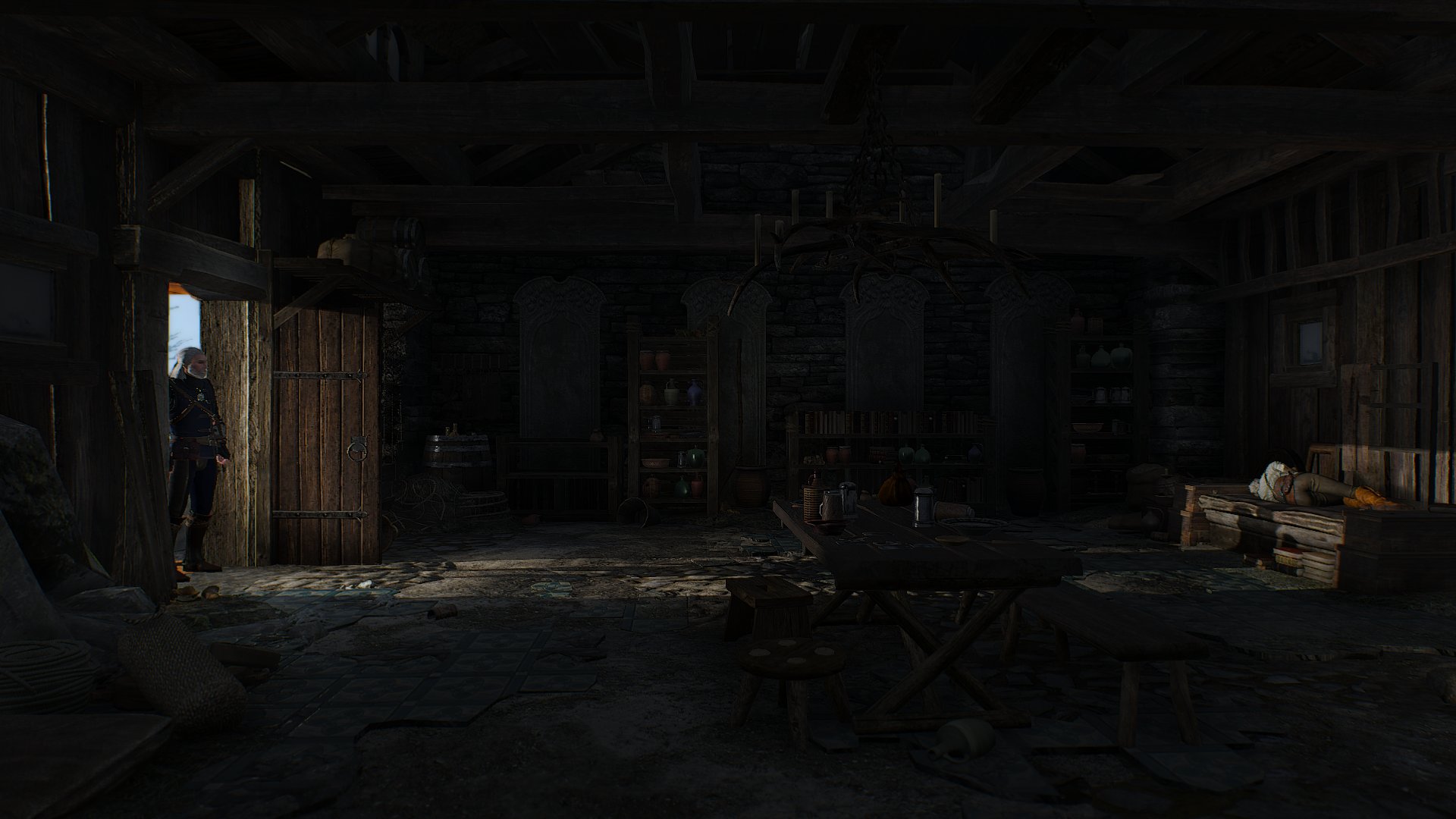 PangaeaEmotional impact... I still get goosebumps looking at a picture like this and remembering what I felt. Such an amazing moment in the game, and CDPR handled it perfectly. Total silence. Geralt standing there, having finally found Ciri, staring across the room with a thousand thoughts crashing through his mind.

Vesemir, the finale, all the little moments, the game has so much, but this was the highlight <3

That's why I mentionned the song "The Swallow and the Wolf", earlier. With it's crescendo tempo, it's a perfect match.
1 Likes, Who? 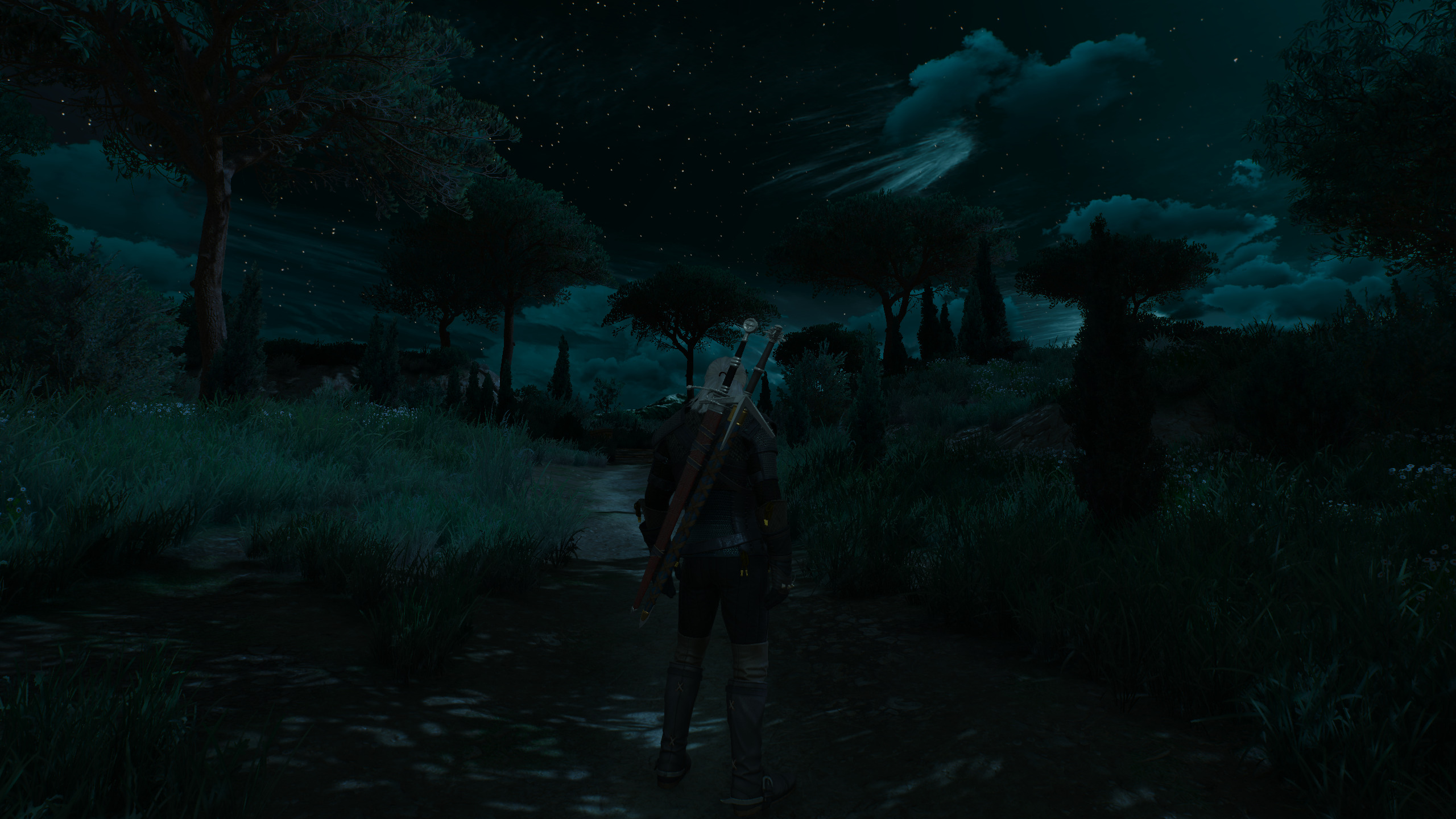 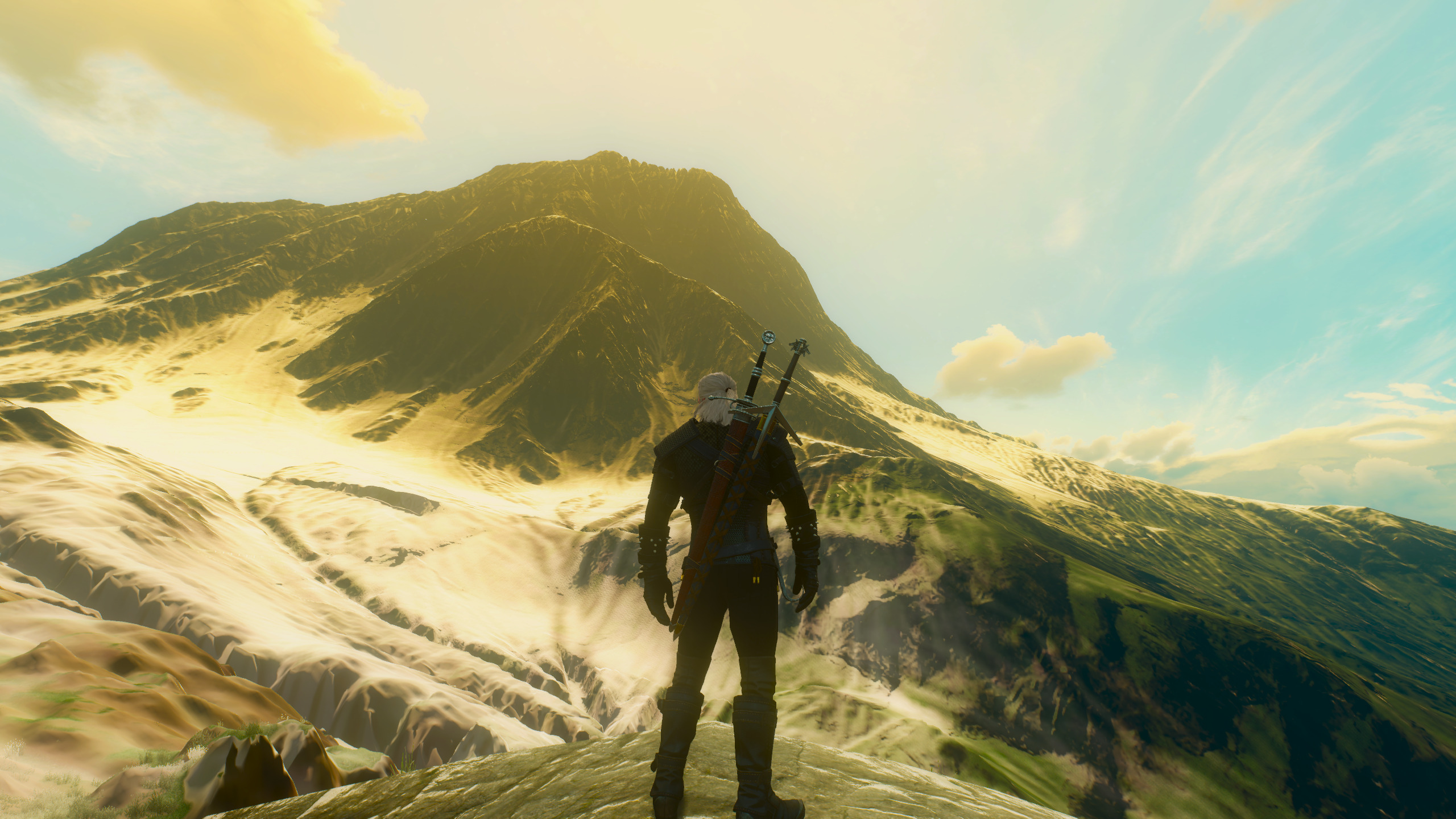 View on Beauclair on the way up 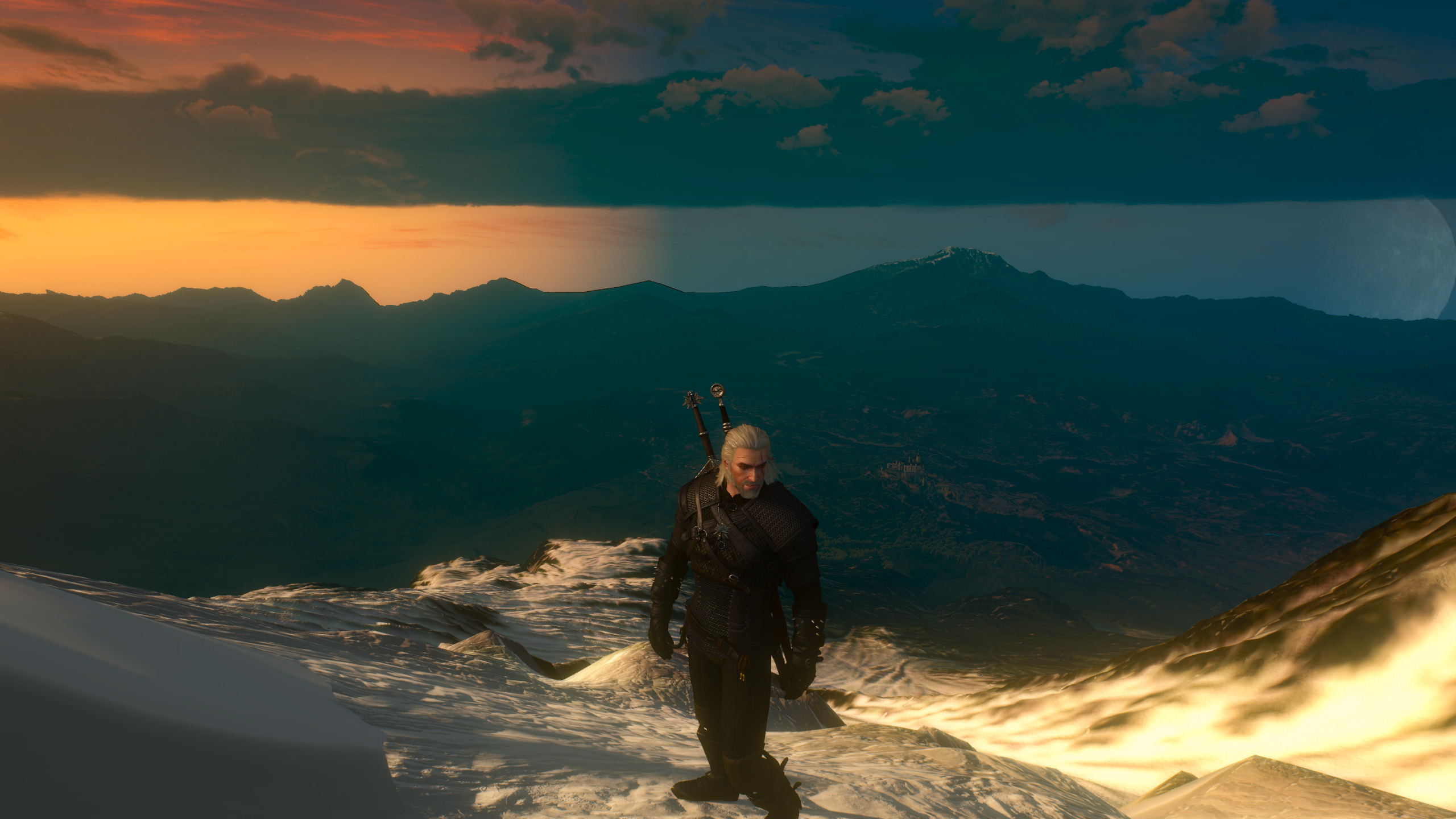 Sunset on the slopes of Mount Gorgon 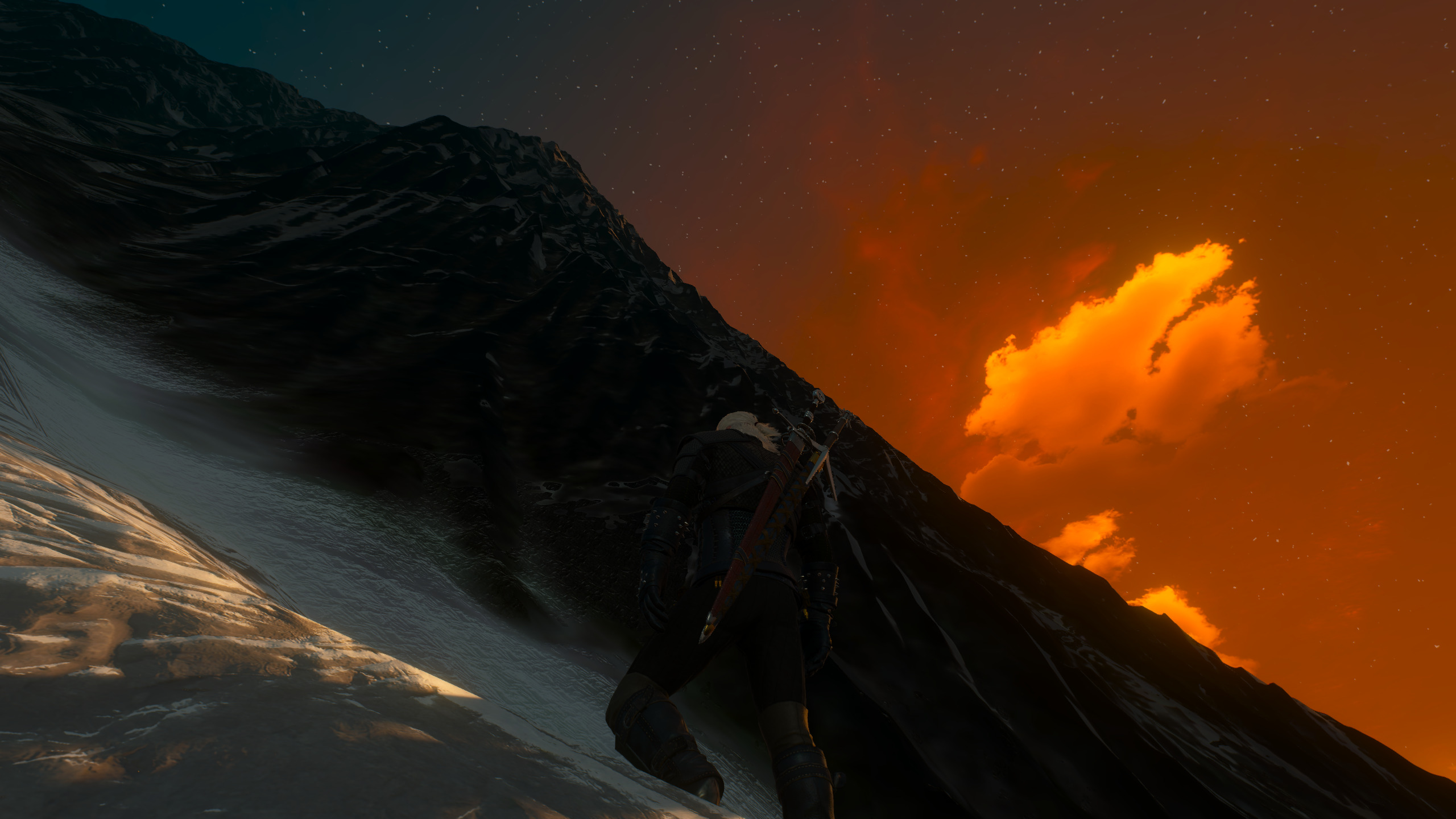 Climbing up the mountain 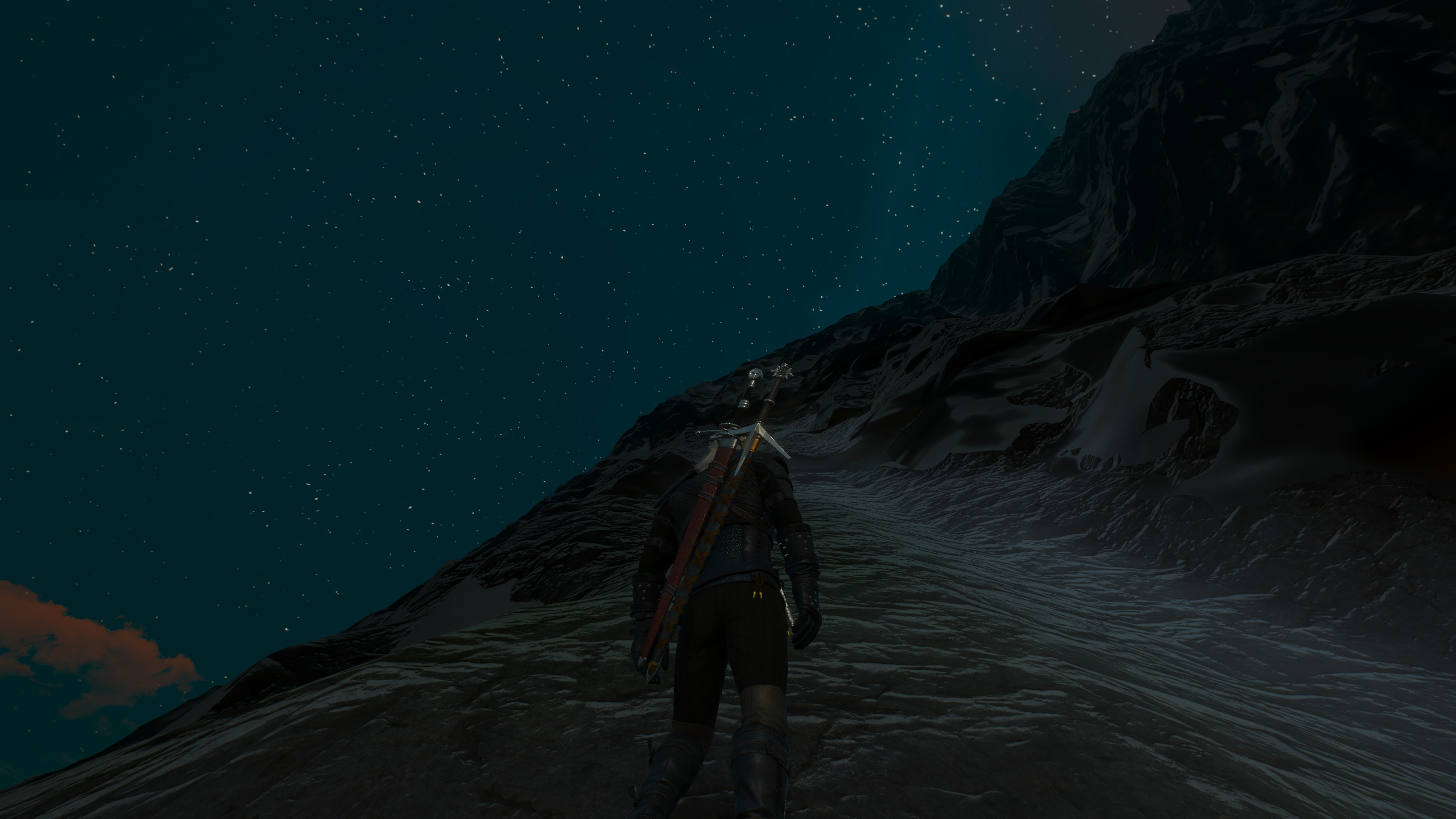 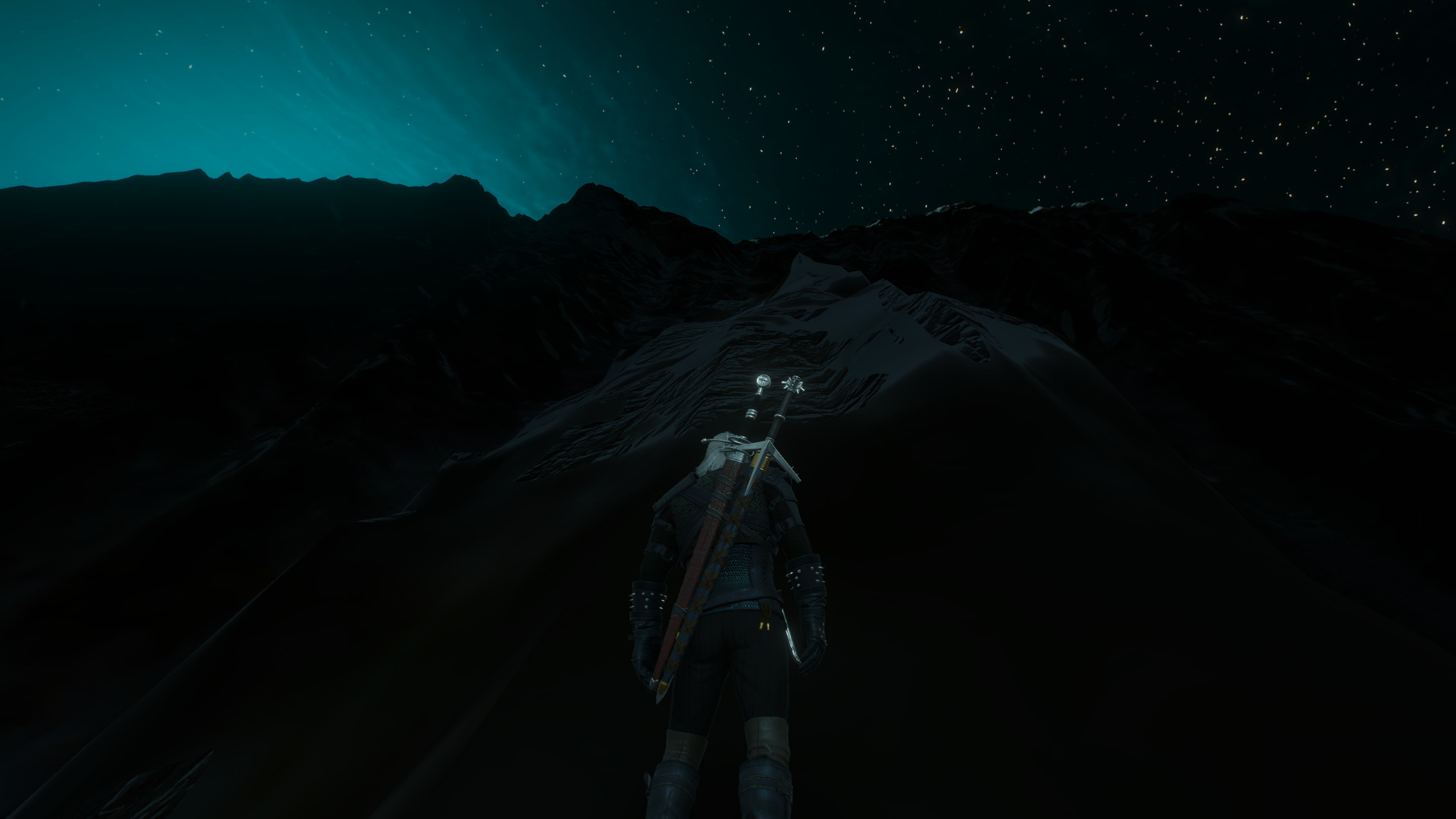 Some alien looking canyon high up on the Mount Gorgon 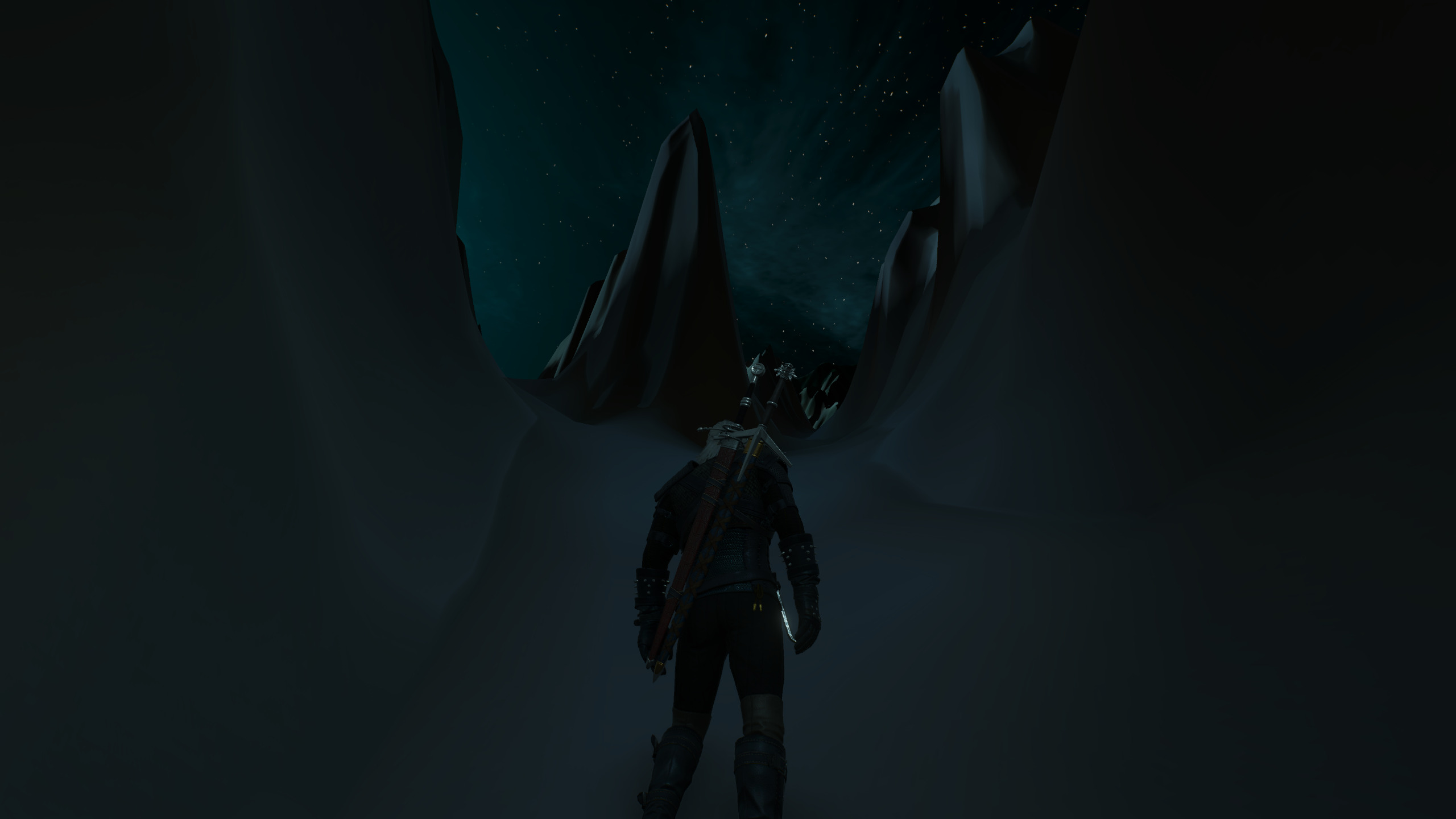 On the smaller peak of Mount Gorgon 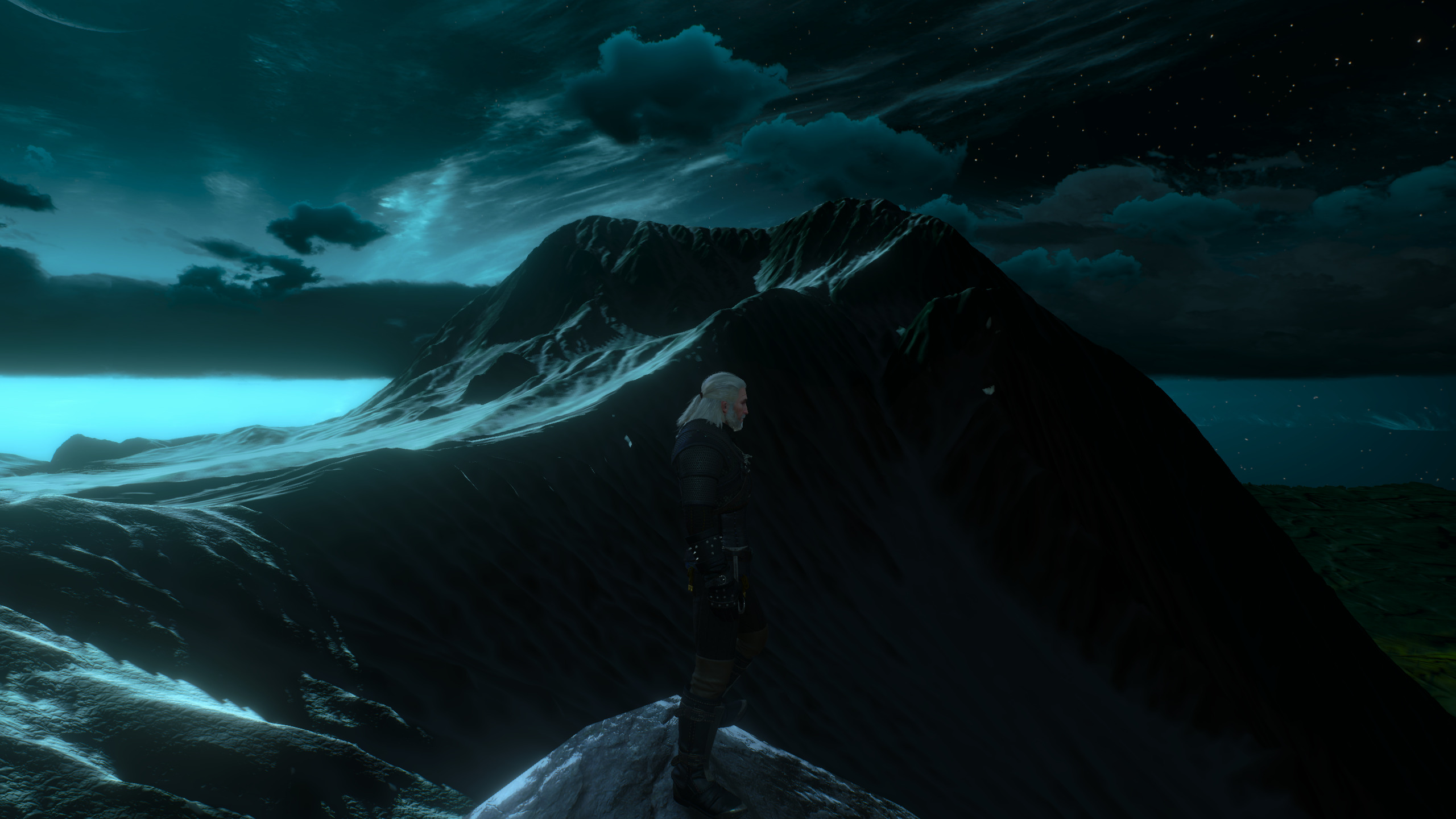 View on the valley from the smaller peak 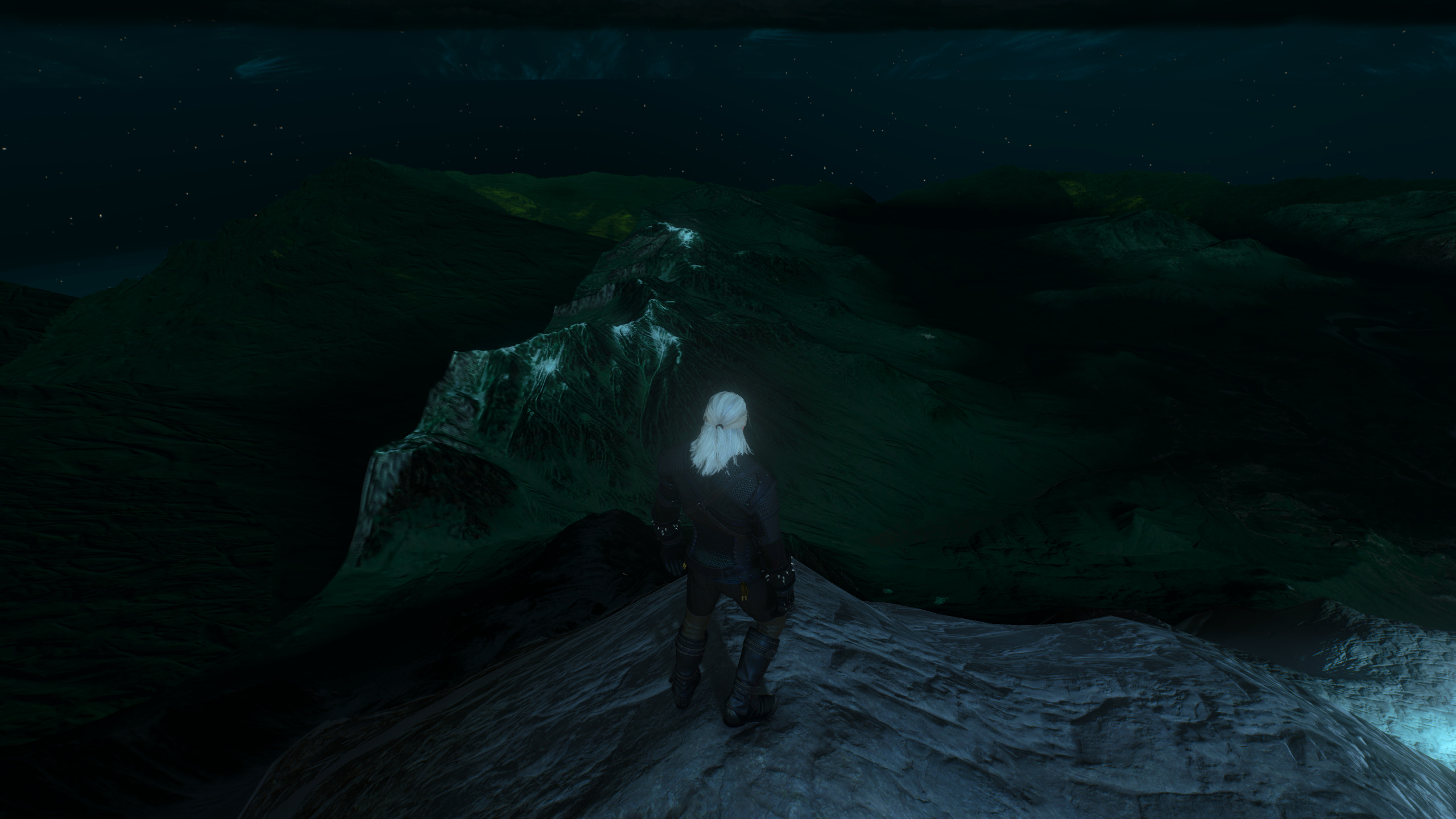 View on the mountain plateau near the smaller peak 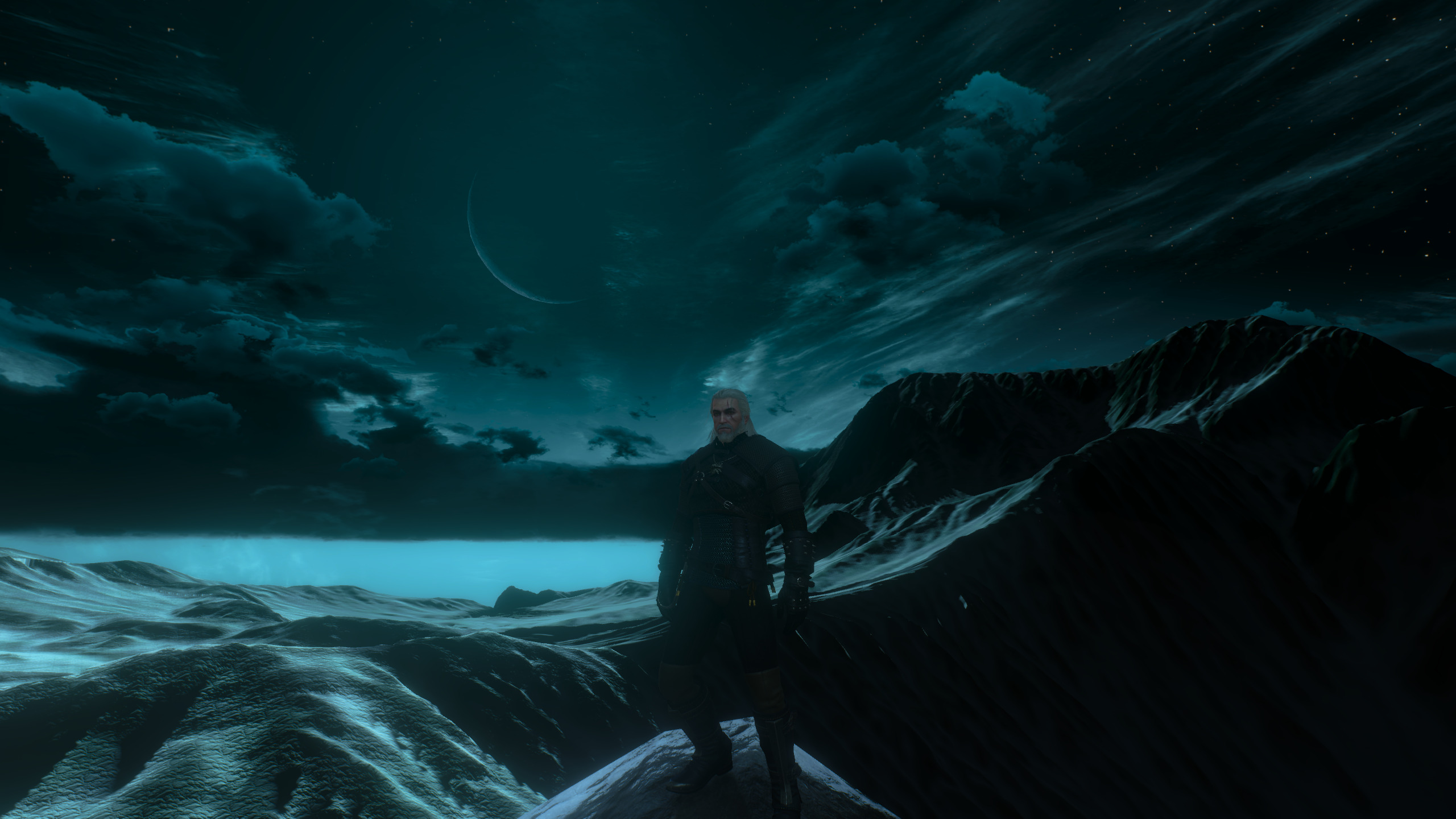 Plateau between the peaks 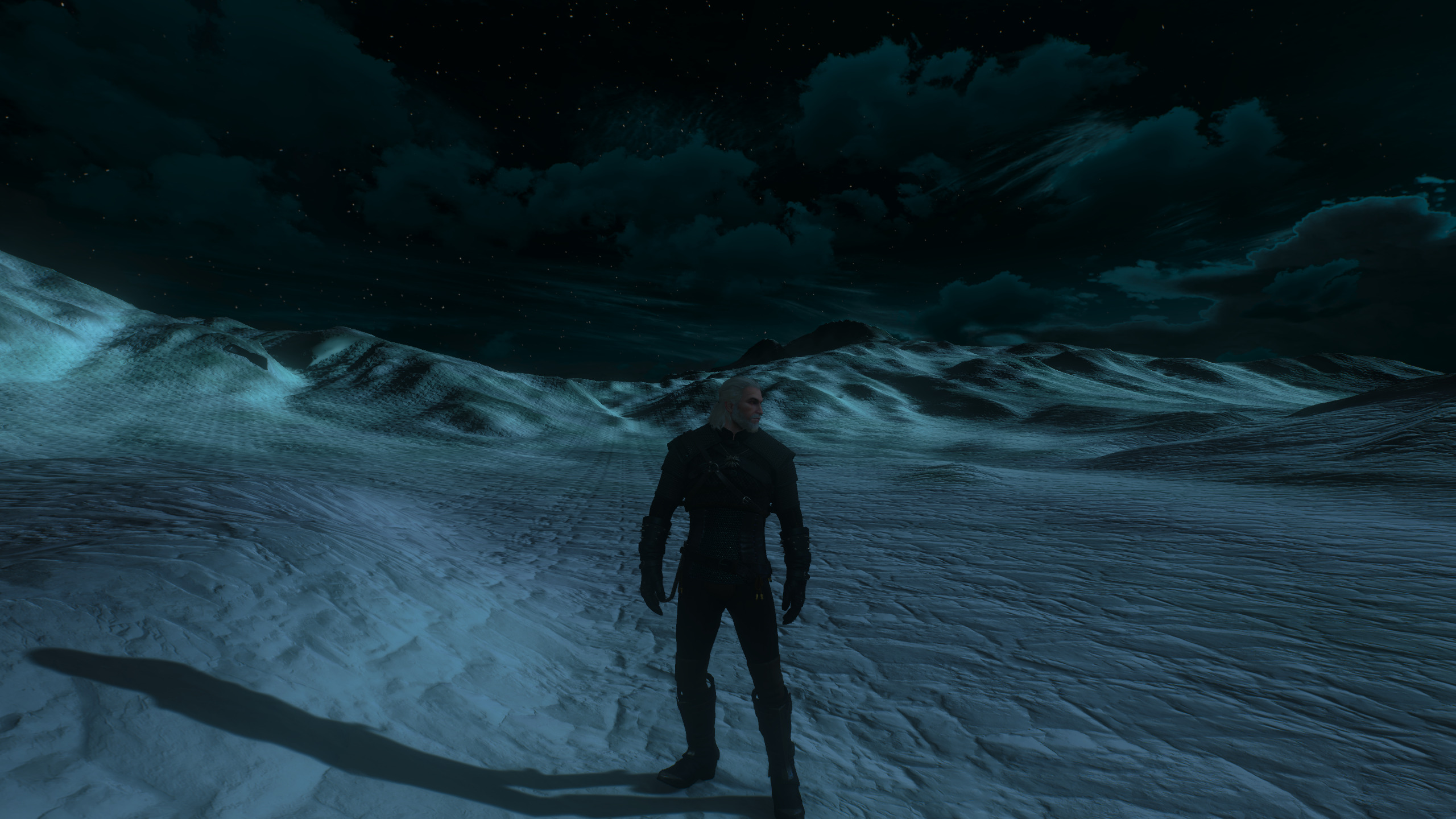 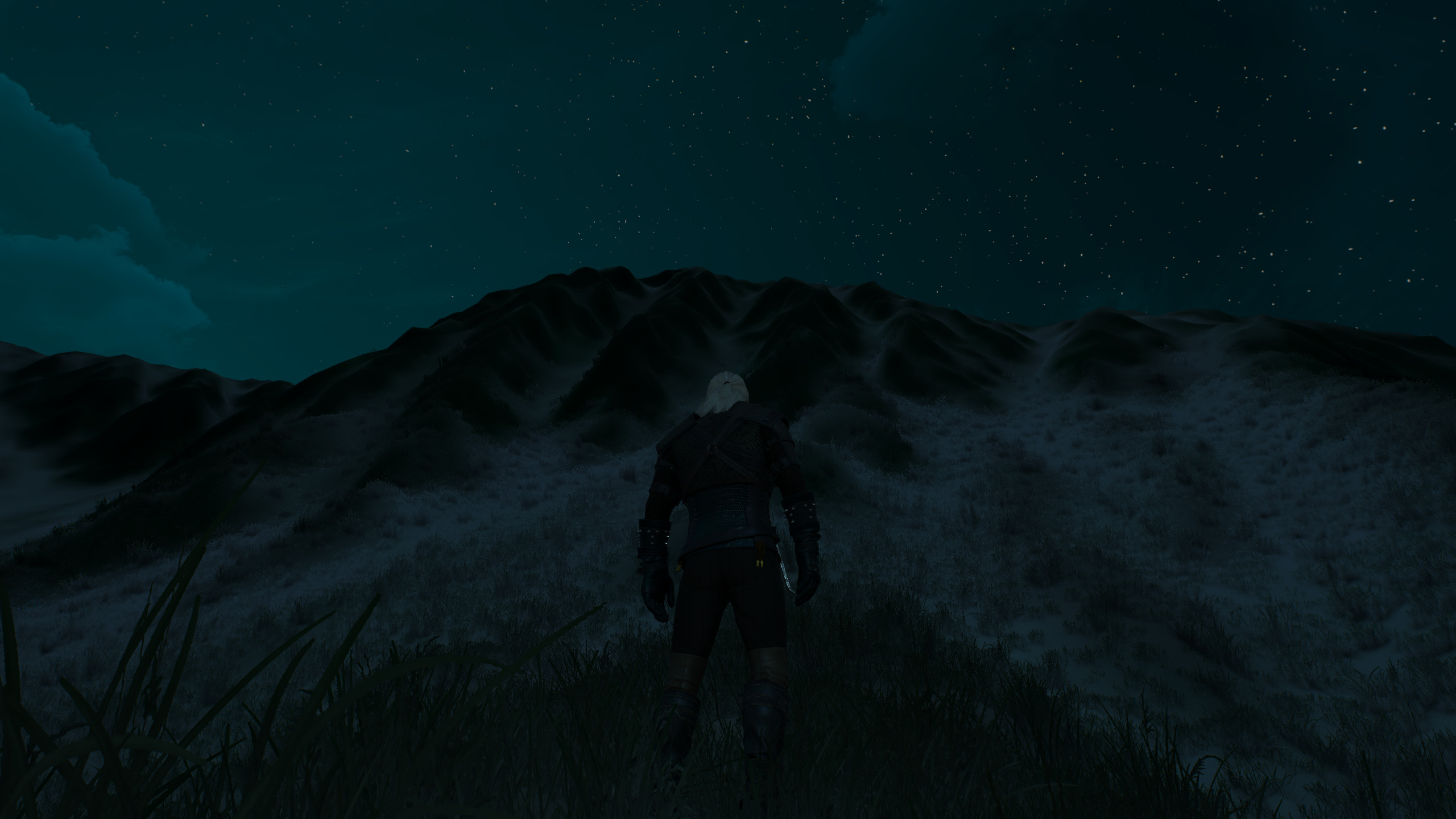 Sunrise on the greater peak of Mount Gorgon 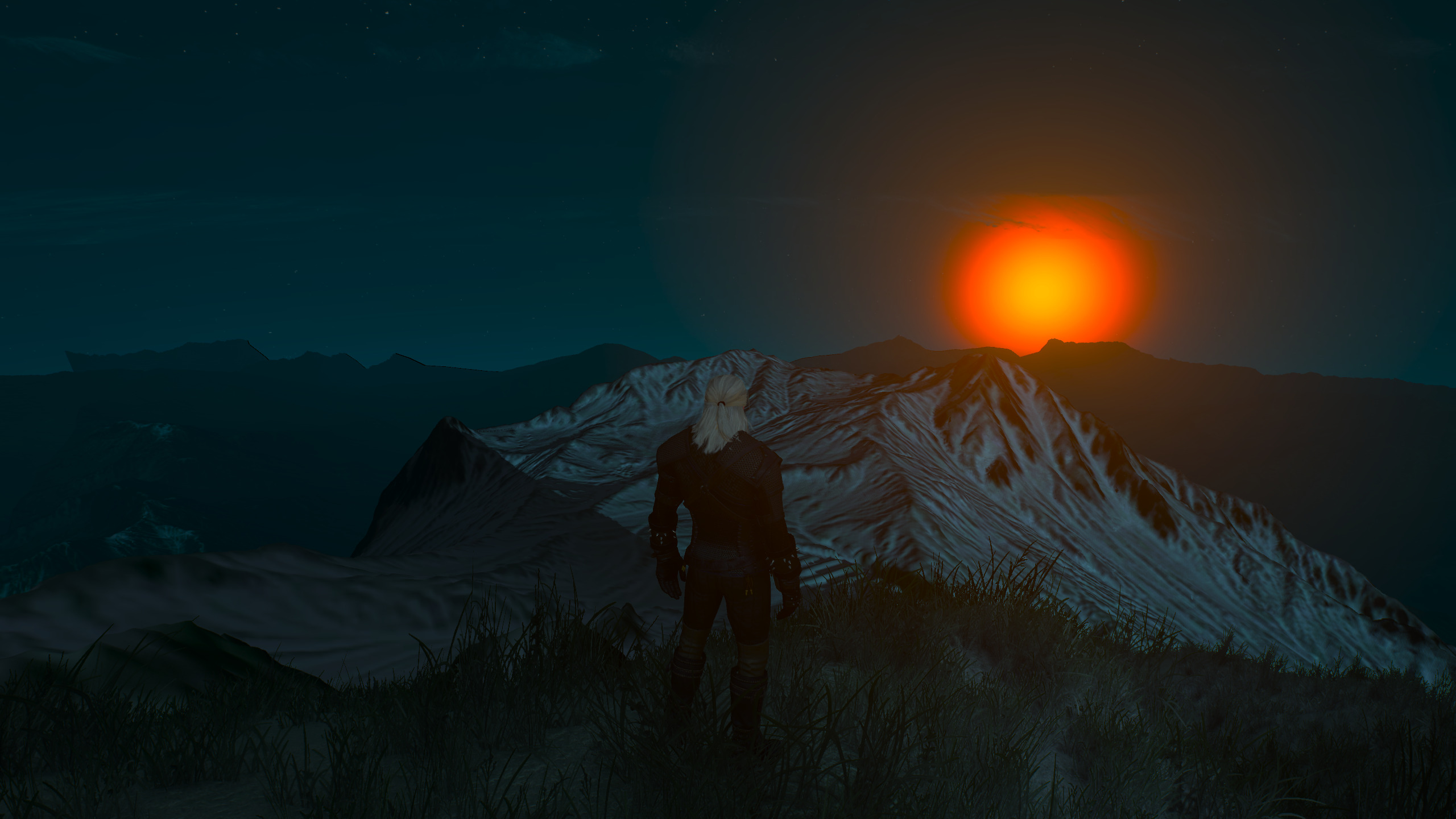