Liberapay or Buy us a Coffee. You can also buy games using our partner links for GOG and Humble Store.
Surviving Mars graphical glitch

Hello everyone.
I am playing Surviving Mars through Steam on an Intel VGA. A thought it wouldn't be enough for it but instead I'm amazed how fluid the game is. Only problem is that whenever there is a game stopping message (e.g. breakthrough) or I open the in-game menu, the background turns into a strange purple mess. Closing the window and continuing the game, everything turns back to normal.
Any help would be appreciated.
glitch image
I could only upload it this way.

it is probably a driver bug or game bug, you should fill a bug report to the mesa bug list and to the paradox forum.
0 Likes

I've got the GOG version and have been playing with an nVidia card without issue. So likely not a problem with the game itself.
0 Likes

The current situation.
I tried sending a bug report with the games' own bug sender, but it told me it failed.
I looked around the Paradox forum and found two things. First, they state that they don't support any Intel VGA on Linux and OSX. So in case someone looks into it, this bug will either have a very low priority for the devs or simply neglected. Second, someone else already reported this bug on the forum and did a detailed investigation as well. The game's shader is buggy but the way Mesa handled it before has also changed. So I expect that there will be some kind of Mesa fix for it sooner or later, as I don't expect Paradox fixing it on their side.
In case someone meets the same problem, it can be followed here.
Mesa gitlab
Thank you for your answers.
1 Likes, Who?

I have not checked, and no idea, but would you happen to know if Surviving Mars has (ambient) occlusion in it's graphics? .. if so, it might be worth giving it a try turning that off.

I had to do so in e.g Two Point Hospital , along with one other game i can't recall yet .. Or else the occlusion effect would cause like something looking like ant swarms scurrying to hide in the shadowed corners of 3d structures at each rendered frame. I would rather blame a somewhat shitty game engine, than drivers or hardware.

EDIT:
The SSAO setting marked here below. Try with that set to disabled/off.. (If not already tried): 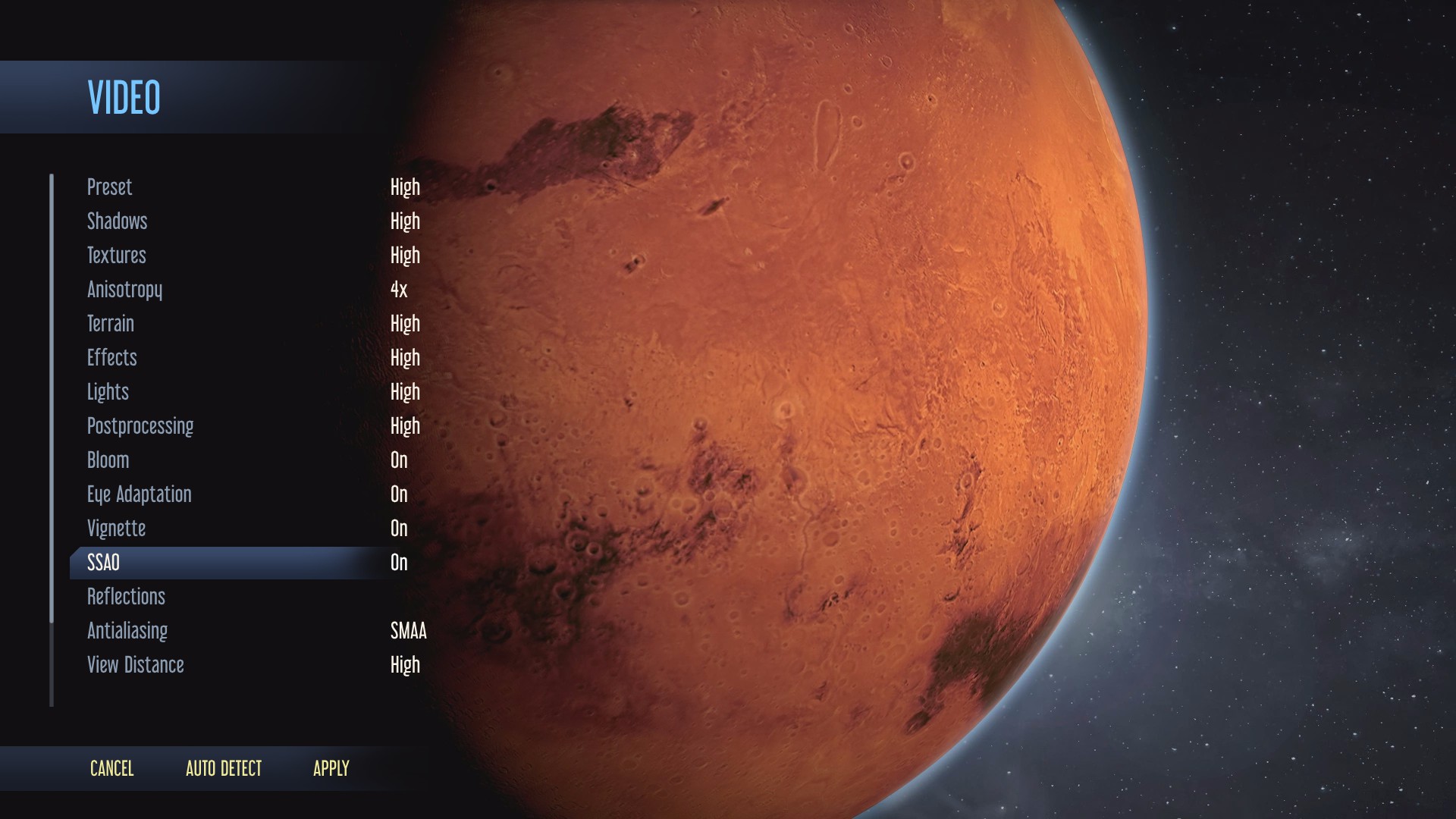 Bonus Joke: Have you checked your machine for CGA graphics cards? :D

Hello.
Thank you for trying to help me. Unfortunately, SSAO Off didn't solve it. The problem is still the same. Might try changing the other settings later.
1 Likes, Who?

BTW: Can memtest perhaps be used to check for leaky graphics ram chips on the card?

I don't think memtest can be forced to work on graphics cards. But maybe it is possible with some kind of stress test (benchmark software).
As I mentioned before, this problem is shader related (game engine bug). Mesa devs are still discussing how to solve it permanently and in a straightforward way (as a game specific fix).

So, shit game engine, no more than that. Why expect it to be accommodated for it's flaw upstream.. I mean, that's the Microsoft way..

Last edited by Duck Hunt-Pr0 on 11 March 2020 at 10:38 pm UTC
0 Likes
While you're here, please consider supporting GamingOnLinux on: